Pitt a gold mine for punters 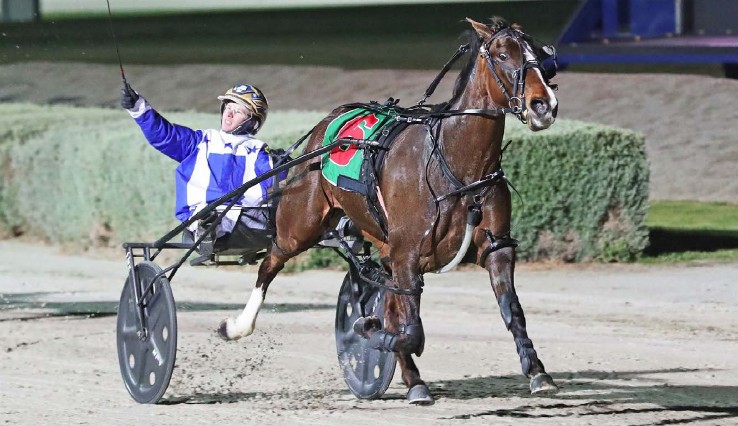 In red-hot form: Mark Pitt drove up a storm in the past week with multiple winners.

It’s been another big week for Shepparton horseman Mark Pitt.

Pitt landed a double at Saturday night’s Melton meeting, including one of the features, the time-honoured Sapling Stakes for two-yearold pacing colts and geldings and then on Tuesday night snared a treble at Echuca.

At Melton Pitt partnered the Emma Stewart-trained Major Celebrity to win the Sapling Stakes and also scored on another of the Stewart team, Cant Top This.

In the Sapling Stakes the Damian Wilson-trained and driven Will He Reign finished a creditable third to Major Celebrity, beaten just more than 7m, in a 1:55.5 mile rate time.

The Stewart-Pitt team also had another winner the night before at Bendigo with three-year-old Captaintreacherous filly Talk Time who was having his third start.

Pitt’s treble at Echuca included two winners for Stewart, including the time-honoured $25,000 George Croxford Tribute, the feature event on the card, on Pettilante who scored an all-the-way win in accounting for the Mark Thompson-trained Missed The Truth with the Jess Tubbsprepared and Greg Sugars-driven hope Bettor Roll On filling the minor placing.

The three-year-old daughter of Somebeachsomewhere was coming off a second placing in slick time in the recent $125,000 Gold Bullion fillies final to the Russell Jack-trained flying machine Just Hope at Melton, so punters said that form was good enough to send her out an odds-on favourite.

Pitt’s other winner for Stewart was another hot-shot, Mosaic Ark, who sat outside the second favourite Animando and gave her backers a fright when she dropped off the pace around the home bend, but came again to secure a gutsy win.

Pitt has now had two drives on the Art Major four-year-old mare for two wins.

Pitt completed his treble when he partnered Border Cross, also an odd-on favourite, to a runaway win for prolific Tasmanian trainer Ben Yole.

It was the first Victorian start for Border Cross, a veteran of 220 starts which have produced 19 wins and 44 minor placings and stake earnings of $120,000.

Yole produced a training double, also winning with the Robert Walters-driven Coveffe Hustler, who had won at his previous start when also driven by Walters.

Shepparton’s John Best is enjoying his first stint in trots ownership even though it is a long-range association.

The man they call ‘’Besty’’ is part owner of emerging trotter Tony Mac who won his second race from his fifth start at Winton in New Zealand’s south island last week.

Besty, a stalwart timekeeper with Goulburn Valley League club Shepparton Swans, was talked into securing a share in the towering son of premier trotting sire Love You by a mate from Rochester who has since dropped out of the ownership of the three-year-old.

In his latest win Tony Mac, trained by Brad Williamson, did all the heavy lifting, sitting outside the pacemaker for most of the trip and pulling away from his rivals at the business end of the race.

A first time owner Besty said he was thoroughly enjoying the ride he and his family were having with the promising trotter and he was hopeful that one day he might even get to see the trotter race in Australia.

Shepparton’s Team Jack produced a winner on his Australian debut at Echuca.

The Russell Jack-trained and Nathan Jack-driven pacer Mr Perfect outclassed his rivals after an early move to take over the front-running position.

A four-year-old Bettors Delight gelding who had won three of his 28 starts and been placed seven times, including six runner-up efforts in New Zealand, had no problems fending off the odds-on favourite Blitzern with a big gap to the third placegetter, Mauries Bonus, in extra slick 1:56.6 mile rate time for the 2160m trip which included a 58.3 half.

There is a local connection with the comeback of former star pacer Jilliby Kung Fu who made a successful return to racing at Albion Park on Saturday night after a lengthy stay on the sidelines.

Jilliby Kung Fu was a genuine superstar pacer when trained in Victoria by Marg Lee before going amiss in early 2020, creating doubts whether he would ever race again.

One of those minor placings was in the 2018 Miracle Mile in which he went down by a head to My Field Marshall, who recorded an Australian record 1:46.9 mile rate which still stands today.

Now in the stables of leading NSW trainer Belinda McCarthy and champion reinsman, husband, Luke, Jilliby Kung Fu made his comeback at Albion Park on Saturday night and despite the lengthy lay-off was sent out a $1.33 favourite.

He duly delivered after an aggressive McCarthy drive in which he came from an outside barrier draw to lead his rivals a merry dance over the 1660m trip in 1:53.5 mile rate time.

The local connection with Jilliby Kung Fu is that he was bred by Congupna breeders and stud owners Dean and Blanche Poole.

Jilliby Kung Fu is by Four Starzzz Shark out of the Perfect Art mare Slip Slop Slap, who has left eight other winners, including Caribbean Crest a winner of 24 races.

Nothing Arcee about it

Finley owners and breeders — and butchers — Ashley Haynes and Chris Shaw may have found themselves another smart trotter in Arcee Phoenix, an impressive winner on debut at Bendigo on Friday night.

The three-year-old son of Trixton out of the Sundon mare Justa Phoenix, trained and driven by Chris Svanosio, gave a flawless display to run his rivals ragged in smart time.

Arcee Phoenix was well found by punters and started an odds-on favourite.

Avenel trainer Juanita Breen delivered most punters a knockout blow when she saluted at Bendigo with longshot Royal Starzzz.

A four-year-old mare by Four Starzzz Shark, Royal Starzzz was resuming from a six months spell and with a strong finishing burst prevailed by a short half-head over the well-fancied Mac Cheddar

It was only Royal Starzzz’s 15th trip to the races and she has now won three of them with her 1:55.5 mile rate for the 1650m trip in her latest effort the quickest of these wins.

Another of the Breen team, trotter Golden Sunset, ran a big race to finish third in his race and show he was ready to salute again.

Kyabram trots trainers have had another good week.

The Mark Watson-trained Prosecco Boy made it two wins from his past three starts with a dashing win last week at Shepparton, while Paul Fidge claimed a $10,000 final at Cranbourne on Sunday night with his smart mare Imperials Reason.

Driver Ellen Tormey sent Prosecco Boy from midfield to a front-running role for the last 1000m and he held off the odds-on favourite Treacherous Rock to notch his 10th win from 47 starts which have also produced 15 minor placings.

The Fidge-prepared Imperials Reason, driven by Ryan Sanderson, was again too good for her rivals and has now won five of her past seven starts.

In the other two races she was placed.

Cobram-trained Some Change completed successive wins on the Shepparton track when he scored at last week’s meeting.

The Don Rudd-prepared eightyear-old gelding who had won on the track at big odds the previous week repeated the dose last week with Shannon O’Sullivan again in the sulky.

But this time Some Change was a $3.80 favourite — in contrast to the 33-1 odds in his previous win — and prevailed by a head in a tight finish from the Glen Bull-trained and driven Sweet Creation.