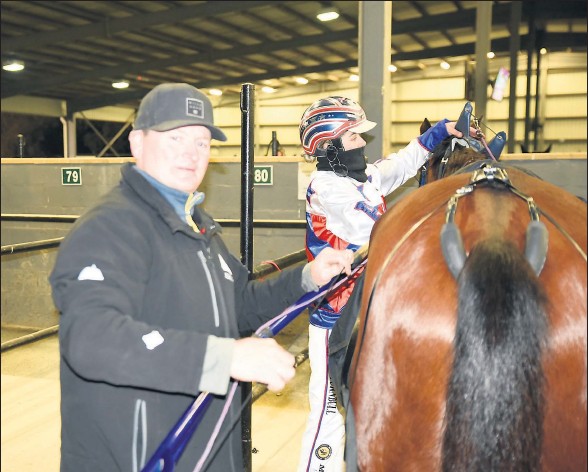 Winning combination: Craig and Abbey Turnbull enjoyed success with No Nay Never at Melton on Tuesday night and had a luckless second with Life Gets Better.

Echuca octogenarian James ‘‘Jim’’ Byrne would have got a big kick out of Markleigh Jean’s win on Wednesday night at Shepparton.

Along with family members Byrne, 88, bred and owns the fouryear-old daughter of Shadyshark Hanover who put up a tough performance to win at her fourth trip to the races.

Summing up the early slow pace top reinsman Chris Alford sent Markleigh Jean to outside the pacemaker Geraldton Wax with a lap to run and in a slogging finish fought off several challengers with slick a 27.9 final quarter.

Trained by Kyabram’s Mick Blackmore it was the mare’s second win, having won at Echuca in January.

Resuming after a break at Shepparton on June 13 Markleigh Jean had no luck in finishing a close up fifth and that run together with the Alford factor was why punters sent her out a $2.30 favourite for her latest win.

Byrne was a fine footballer in his day.

He won the Michelsen Medal playing for Sandhurst in the Bendigo Football League in 1955 and in 1956 appeared in the opening three rounds of the VFL season with St Kilda.

But his permit had only been for those three games and Sandhurst would not clear him.

But it did the following year and he played in the first two rounds of the season with St Kilda before suffering a knee injury, which would ultimately end his football career.

He would go on to buy a farm at Lockington and coach the local football team.

Star Avenel-trained pacer Max Delight claimed the Blacks A Fake feature at Melton on Saturday night with a courageous effort.

The five-year-old son of Bettors Delight had to work hard early to wrest the lead from Shadow Sax and was able to fend off that pacer in a two-horse war to the finishing line.

His only other drive on the pacer delivered a win in the Italian Cup at his previous start at Melton on June 19.

Max Delight has always been a talented pacer with the lucrative Breeders Crown final and NSW and Tasmanian Derbies in 2019 as a three-year-old in his resume.

Saturday night’s win was his 18th from 40 starts which have also produced 10 minor placings and more than $460,000 in prizemoney.

Two firsts and two seconds was the haul for in-form Shepparton trainer Russell Jack from one of his rare trips to Mildura on Friday night.

Jack landed the money with odds-on favourites Roscommon Rose and Young Rooster and got the silver medals with Beau Steele and Miss Lemon.

Reinsman Leigh Sutton was in the sulky for all four races.

Roscommon Rose was having her second start for Jack, finishing fifth to Geraldton Wax at the June 8 Shepparton meeting at her first Australian start.

Sutton settled the four-year-old Art Major mare near the rear of the field and she was able to mow down tiring rivals who set a hectic early pace in the home straight.

Roscommon Rose had 21 starts in NSW for four wins and six seconds, so had some form before joining Jack.

Young Rooster went straight to the front and led throughout and with a 56 last half kept a small field of rivals at bay to claim his 11th win.

It was Young Rooster’s second win for Jack since he took over the training of the Well Said gelding from Amanda Turnbull 14 starts ago.

In that time Young Rooster has also clocked up seven top three finishes, so has been a consistent money earner.

Shepparton trainer Laura Crossland provided Abby Sanderson with her first win as a driver on Monday at Maryborough.

Sixteen-year-old Charlton-based Sanderson was given the drive on the Crossland-prepared Cool Rocking Daddy, who broke a run of 19 starts out of the winner’s circle with his win.

“When Coby (Crossland’s son) couldn’t drive him he contacted Ryan Sanderson who suggested Abby who is his younger sister,’’ Crossland said.

‘‘She had only had two other drives and they were at the Stawell meeting last Friday.

‘‘The instructions were to drive him quietly and make her run on him at the top of the straight and that’s what she did. She drove to the directions, so it was a good drive.

‘‘He had been pulling up a bit in his races, so we decided to try this way and it worked.’’

While it was Cool Rocking Daddy’s first win in 19 starts he has still been a consistent money earner, running eight seconds and two thirds and two fourths in that winless period.

A four-year-old gelding by A Rocknroll Dance his record now stands at six wins and 16 minor placings from 38 starts with prizemoney topping $45,000.

Four-year-old pacing mare No Nay Never was rewarded for her consistency with a strong win at Melton on Tuesday night.

The Craig Turnbull-trained and Abbey Turnbull-driven daughter of Heston Blue Chip produced a sustained run from the back of the field at the business end of the race to account for the favourite Bring The Flave and Hard Rock Shannon.

No Nay Never had five top four finishes leading into the race since winning at Gunbower on May 9 and prior to that was runner-up on five occasions and third twice in his previous 10 starts, so it was a welldeserved win.

Tight as they get

When it gets to close finishes they don’t get much tighter than the one trotters Builder Bob, Bad As Now and Roi Du Soleil fought out at Shepparton on Wednesday night.

Much to the delight of favourite backers, the Russ Thomson-trained and Brent Thomson-driven Builder Bob prevailed by short half-head over the Damian Wilson-trained and driven Bad As Now with Roi Du Soleil a half-head away third.

There was daylight — 41.9m to be precise — to the fourth trotter home, Lucky Serina.

Punters were right on the ball with Builder Bob a $2 favourite and the second and third placegetters equal second favourites at $4.20 with the rest of the runners more than $10.

A four-year-old by Angus Hall out of the top racemare Shes An Image, Builder Bob has always shown a lot of ability and was having his second start this campaign and as a four-year-old.

He has had 15 starts for two wins and four minor placings.

Five-year-old pacer Fullofmischief returned to the winner’s circle in style — and at huge odds — at Shepparton.

Prepared by Tongala horseman Michael Watt and driven by longshot specialist Donna Castles, the son of Major Bronski raced outside the pacemaker and odds-on favourite Duke Of Dundee for the majority of the race and proved too tough for that pacer in the drive to the wire.

Fullofmischief, who had not raced for six weeks and had his last win eight starts previously at Bendigo in December, was a 30/1 shot.

Out of the four times winning Jet Laag mare Miss Jules, Fullofmischief has had 18 starts for three wins and two thirds.

Weekend metropolitan class racing goes to the country for the next month.