Tale of two cups is unique 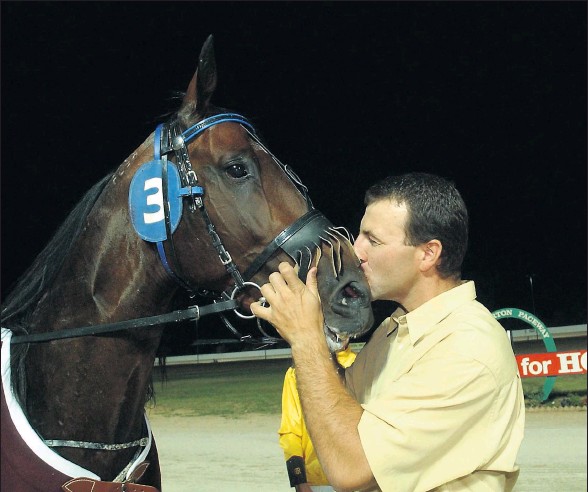 There is a touch of irony associated with the only two Shepparton trainers to produce a hometown cup winner.

The David Moran-trained and driven superstar pacer Lochinvar Art, who claimed Saturday night’s $60,000 Shepparton Gold Cup is the only pacer to be prepared at the Kialla racing complex to have won the time-honoured race.

Heath Redwood, who trained Unique Icon to win the 2002 version was a Shepparton-based trainer, who at the time was preparing his team at a Coomboona property.

But he then moved his training operation to the Kialla trots complex for a few years before getting out of the game.

And who moved into his training barn?

Yes, David Moran. Lochinvar Art is a short-priced favourite to add the $110,000 Ballarat Pacing Cup to his resume tomorrow night, even though he has several more rivals to contend with and a more challenging draw than he did in the Shepparton Gold Cup.

But it would be hard to find someone who believes he is vulnerable on what he has been doing to his rivals in recent times.

David Moran was the toast of Shepparton and the harness racing world when Lochinvar Art won the Shepparton Gold Cup on Saturday night.

But another of his team at the meeting, Patsbeachstorm, also had some astute judges raising their eyebrows with his win.

Stepping out for the first time in 11 months and having only his fourth start, the three-year-old son of Somebeachsomewhere scored one of the most convincing wins on the program.

He sailed to the finishing line almost 15m clear of the runner-up Stylish Joe with the Isabel Walshprepared Vintage Blu filling the minor placing.

Raced by a big syndicate of owners — mainly family members of the late Pat Kelly, who the pacer is named after — Patsbeachstorm rated a slick 1:55.6 for the 2190m trip, dashing home the last half in a scorching 55.6.

Patsbeachstorm is out of the Sportswriter mare Charissa Tee, a four times winner with 10 placings from 21 starts.

There may have been smaller fields than previous cup meetings, but Saturday night’s Shepparton Gold Cup meeting still proved a big winner.

He said he couldn’t think of a previous cup meeting with so much audience participation.

‘‘The atmosphere was incredible with the crowd very active and noisy with their barracking,’’ McDonald said.

McDonald said the 1000-strong crowd cap was met and everything had gone to plan.

‘‘I think it was a good chance to

get out and have a night out. Being free entry and the appearance of Lochinvar Art also contributed a lot to the success of the meeting and the crowd,’’ he said.

There was a strong family f lavour to Boncel Benjamin’s win at Shepparton.

The six-year-old Grinfromeartear gelding was too quick and too tough for his rivals in a heat of the Hunter Rural Mercury 80 over the short trip of 1100m.

He had to do plenty of work in the run, but was more than up to the challenge in accounting for The Dude and Im No Outlaw with the odds-on favourite Jawbreaker disappointing in finishing fourth.

Boncel Benjamin was driven to victory by Ryan Duffy for trainer Michael Stanley.

He was in the stable of Duffy’s father Steve for some time after starting his career with Stanley.

Steve’s wife Julie owns Boncel Benjamin, who has now won 12 races and has been placed 12 times in 48 starts, to add more of family f lavour to his journey.

Smart pacing mare Starsbythebeach claimed her seventh win when she saluted at Shepparton.

being headed by Scorcha in the run to the judge, but rallied determinedly to beat that pacer and Ozzie Battler.

Starsbythebeach had finished second to Millah Joy at her previous start at Bendigo on January 9 and punters were impressed enough with that performance to send her out a $2.90 favourite in the $20,000 event.

Reinsman Chris Alford made a winning move midrace when the pace had slackened off to send the mare to the front running position which she held until temporarily headed by Scorcha half way down the home straight.

Rochester horsewoman Caitlin Guppy is doing pretty well with what she terms “a cheap buy’’.

Since acquiring pacer Paddington Central from an internet sale site about 12 months ago Guppy has produced the now eight-yearold for five wins, the latest this week at Melton.

Driver Anthony Butt worked Paddington Central to the front early and the son of Changeover comfortably held off all challengers in the drive to the finishing line.

Before Guppy took over the training of the pacer he had won three races.

He has now had 83 starts for eight wins and 13 minor placings with his latest success taking his prizemoney to more than $50,000.

Guppy, who prepares a small team on her parents’ farm near Rochester, has Bendigo in her sights for Paddington Central’s next outing.

A $9 chance driven by top reinsman Greg Sugars Aldebaran Poppy prevailed with a strong finishing burst, edging out the Merrigumtrained Lexington Queen by neck in the 1609m dash.

Aldebaran Poppy ended last year with a win at Shepparton on December 28 and started the new year in the same vain, scoring at Swan Hill on January 5 before tackling Wednesday night’s assignment.

All-round Echuca horseman Wayne Lear prepares her and with family members has ownership interests in the seven-year-old Skyvalley mare who has now won seven of 45 starts with 10 minor placings.

Her latest win books her a spot in the $30,000 final of the Mares Sprint Championship on Great Southern Star night at Melton on February 5.

Euroa horseman Cameron Maggs produced the perfect drive to land Smileforawhile a winner at his third start on Monday at Yarra Valley.

Maggs parked the Grinfromeartoear four-year-old in the one-one sit in the run and when he popped the question for an extra gear on the home turn he got it and went on to a comfortable win.

Smileforawhile is out of the unraced Artesian mare Montesian, who has also left the smart pacer Armchair Drive, a winner of 11 races.

Driven by Chris Alford, the sixyear-old son of Majestic Son accounted for Travel Bug and Scruffy Murphy to claim his 11th win.

Echuca’s Rob Owen and former Seymourites Gary Dowling and John Wilkinson are part owners of the talented trotter who has more than $160, 000 in prizemoney.