Super pacer battle not on

LOCHINVAR ART PRIMED FOR $30,000 FREE-FOR-ALL, BUT RIVAL RIDE HIGH NOT A FINAL ACCEPTOR 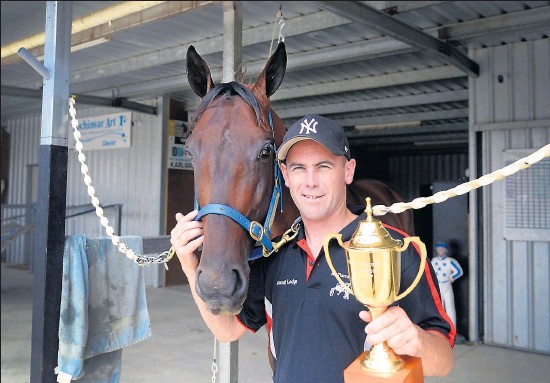 The much-anticipated battle between super pacers Lochinvar Art and Ride High has been prolonged again.

Both were nominated for tomorrow night’s $30,000 TAB Minuteman Free-For-All when metropolitan class racing returns to Melton, but Ride High was not a final acceptor.

The Shepparton-trained Lochinvar Art will take his place in the field in which he will come from barrier 11, four off the second row.

The Steve O’Donoghue-Bec Bartley team will also line-up San Carlo in the same race from barrier nine next to Lochinvar Art.

While Lochinvar Art was beaten into second place by Hurricane Harley at Bendigo last Saturday night, trots pundits were declaring it may have been his best career run.

And his trainer driver David Moran did not disagree.

‘‘I thought he went terrific and was really stoked with his run, which was or was close to a career best even though he was beaten,’’ Moran said this week.

Private clockers had Lochinvar Art running his final mile in sub 1.50 mile rate minute time despite being caught wide for a period approaching the bell lap.

Moran said Lochinvar Art had pulled up well in preparation for tomorrow night’s showdown, the first two lead up races to the Victoria Cup.

‘‘I very happy with him at the moment,’’ Moran said.

Emerging star Reactor Now might not have won, but he announced his arrival as a serious contender in the ‘‘big time’’ with his effort behind Hurricane Harley and Lochinvar Art at Bendigo last Saturday night.

The David Aiken-trained four-year-old son of Auckland Reactor was beaten into fourth placing, only 9.6 metres from the winner, in a super performance.

The David Aiken-trained and Josh Aikendriven Reactor Now was having only his 16th career start and is basically in only his second preparation, so the best of him is still to come.

Winners in and out of sulky

It has been another big week for Amanda Turnbull with several winners in and out of the sulky, including a driving double at last Saturday night’s Bendigo meeting.

One of her Bendigo driving wins was on the Emma Stewart-trained Hurricane Harley, who led throughout to beat Lochinvar Art and Code Black in the fast class race.

Turnbull also produced The Crimson Prince, whom she trains, to win with James Herbertson doing the driving honours.

Turnbull partnered another of her stable Sonny Weaver to snare the quinella in the same race.

Turnbull was also in the sulky on the Russell Jack-trained Star Ruler who completed successive Australian wins at the Echuca meeting last Sunday.

Star Ruler, who saluted at Bendigo in his Australian debut on September 10, had to earn the Echuca win, just getting the better of pacemaker and locally trained Cobber Mac who made a bold bid to cause the upset.

Star Ruler had had just the one win from 51 tries in New Zealand, so has been making up for lost time in Australia.

Third first-up in Australia at Bendigo on September 10, the three-year-old Sweet Lou gelding led from start to finish in an effortless win.

Both winners — Panda Girl and Rambunctious — are trained by Chiltern horseman Peter Romero.

Panda Rock was having her first start in Australia after winning one race from 13 tries on New Zealand’s South Island.

Maggs was snookered three back on the pegs for most of the trip on Panda Girl, but was able to extricate the four-year-old daughter of Pet Rock in time to finish strongly to beat Cheeky Philtra and Lord Commander in a blanket finish.

The well-travelled Rambunctious ended a run of 15 starts out of the winner’s circle and gave Romeo his first success with the threeyear-old Hes Watching gelding who had three previous wins with other trainers.

Rambunctious led all the way to beat Aunty Millie and Beau Steele in PB 2.00.6 mile rate time for the 2160m trip.

But unlike his previous win on the track when he led throughout for trainer Craig Turnbull and his reinsman daughter Abbey, Giant Jackson tracked the pacesetter Roslyn Gaye and finished strongly along the sprint lane to achieve his sixth career in 55 starts.

Giant Jackson was bred by the Kevin Newbound Family Trust.

The Doc Wilson-trained and Donna Castles-driven Penitente is another pacer who excels on the Echuca track.

After winning on the track on August 27 and then running third at his previous start on September 9, Penitente last Sunday put up one of the runs of the meeting to come from last at the bell to finish strongly and account for the Terry French-trained and Abbey Turnbull-driven Yoursandmine by a half head.

Three of Penitente’s four career wins have been on the Echuca track.

A Bathurst Gold Tiara heat winner in 2018 when at cricket score odds, Writeaboutjess, reined by Chris Alford, was having just her second start for Potter and her eighth career start outing she came from last in the final lap to prevail over the John Newberry-trained Shez Elite and Nats A Christian a busy finish in her latest run.

Writeaboutjess had her first start for the Potter stable at Bendigo on September after an 18-month lay-off and duly delivered as a $1.80 favourite but was a more generous $4.10 chance at Shepparton.

Four-year-old Mach Three mare Divine Diva put up one of the runs of the night to hoist her ninth career win when she saluted at Shepparton last week.

Divine Diva was driven a patient race by Josh Aiken, tacking onto the three-wide line in the back straight the last time and finishing strongly to account for the Laura Crossland-trained-and-driven Cool Rocking Daddy and the Bec Bartley-driven Herehecomes, who both finished the race off strongly.

Despite winning on the track three starts previously on June 24, Divine Diva was a $15 chance on the tote.

Divine Diva has now saluted nine times and has been placed on six other occasions in 37 race starts, which have netted more than $55,000 in prizemoney earnings.

Pet Rock three-year-old Jemsoms Pet maintained his good recent form to notch his second win in his past four starts when he scored at Shepparton last week.

Trained by Greg Lewis and driven by Ben Gledhill, Jemsoms Pet put up the toughest runs on the program to land his third career win from 39 tries.

Despite racing outside the pacemaker Barranjoey for the entire trip and headed by the hot favourite Hesty straightening for the run to the judge, Jemsoms Pet kept digging deep to account for that pair in the drive to the wire.

After winning on the same track on August 25, Jemsoms Pet finished second at previous start at Echuca to show he was holding his form.

Gath’s skills as sharp as ever

Brian Gath might be 76 years old, but he displayed his driving skills at the Shepparton meeting to win on the Great Success trotting mare Mulberry Pie.

And Gath did it in a front-running role, which he has become famous for during the years.

Gath speared the John Davidson-trained four-year-old mare straight to the front from barrier four and she comfortably held off the challenges from Nervewracking and Bicardi Jess in the run in PB 2.04.8 mile rate time for the 2190m trip.

Streak comes to an end

After winning 10 races on the trot on the Mildura track, Bernie Winkle’s conqueror was the well-performed Egodan who tracked the hot favourite into the race three wide over the final circuit and caught him on the finishing line in the $20,000 event, the third richest race staged by the Mildura club.