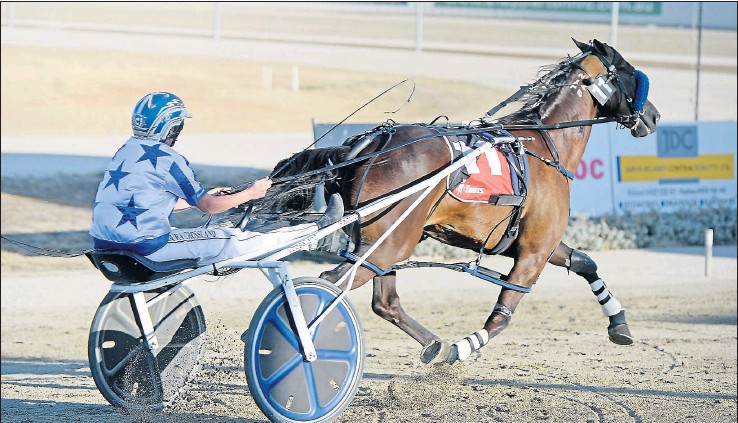 Talented pacer Shadow Chevron completed a hat-trick of wins on the Shepparton track when he saluted last Sunday night.

Formerly prepared by Mark Pitt, Shadow Chevron has won four of his five starts for Crossland and five of his past six outings.

The first of his hat-trick came in January and he won again on his return to racing on April 1 before his latest success.

His record reads six wins and four placings from 16 starts.

While Isabel Walsh had to be content with a second placing with new stable addition Treasure she was still in the winner’s circle at the meeting with another former Emma Stewart runner Do Not Surrender.

Backing up from his previous win on the track Do Not Surrender, driven by Josh Aiken, toughed it out to account for the Mark Watsonprepared Hanover Starzzz and the Greg Lewis-trained and Ben Gledhill-driven Jemsoms Pet.

Walsh has now produced Do Not Surrender six times for two wins and three seconds.

Do Not Surrender was one of two winners Josh Aiken drove at the meeting after six wins at the first two meetings on the track since regional racing was introduced on April 2.

Aiken’s other winner on Sunday was Ideal Star who was having his first start for new trainer David Aiken.

A five-year-old son of American Ideal, Ideal Star streeted his rivals in 1:53.8 mile rate time over the 1690 m trip which was a track record.

Previously trained by Tim Butt in NSW Ideal Star had won nine of 29 previous starts with 1:51.3 PB to his credit at Menangle.

Trotter Col Du Galibier was another horse to complete successive wins on the track when he upstaged a strong field to notch his sixth win.

Driven by Stacey Towers for Congupna trainer and partner Mark Lee, the eight- year-old Great Success gelding accounted for the classy favourite Cracker Jet and Majic Fair with a 58.6 last half over the 2190 m trip.

A 65-race veteran with six wins and 28 placings, including 17 runners-up finishes, Col Du Galibier has missed a top four finish only once in his past six starts and has never raced better.

Rochester trainers have been doing well at Shepparton meetings since regionalisation racing was introduced earlier this month.

Mark Thompson has had a couple of winners and Col Godden has also struck.

The Mach Three six-year-old mare and the favourite, the John Newberry-trained and driven Shez Elite, had the finish to themselves with Alta Mach, a 16/1 shot, edging out the $1.60 favourite in a dingdong finish.

Previously trained in South Australia where she had 19 starts for two wins and six placings Alta Mach was having her first start for Eeles.

On wings of an Angel

Techys Angel made it three wins from five starts with an impressive win last Sunday night at Shepparton.

The three-year-old Russell Jacktrained Alta Christiana filly gave away age and experience to her rivals and was more than up to the challenge in accounting for Village Encounter and Miss Fandango.

Techys Angel won at Bendigo on March 31 at her previous start and has now won the three races with a second placing from five starts.

Euroa horseman Cameron Maggs is one horseman who hasn’t missed out on driving a winner in the first three Shepparton meetings since regionalisation.

Maggs had a winner at last week’s Monday meeting and then buttered up at the Tuesday morning meeting the next day with a treble.

Renway Reactor led all the way and just held off the Matthew Berger-trained Bella Mystique, who had also won her heat on the Tuesday.

Renway Reactor, a four-year-old by Auckland Reactor, has now won three races and been placed in another two from 13 starts.

Riding on a Ky high

Kyabram trainers and owners are enjoying a wining trot at the moment.

Abbey Turnbull did the driving honours and brought Casting Shadow from last over the final lap to beat the Col Godden-trained roughie Village Art in a photo finish with the Craig Turnbull-prepared Fletchas Roy filling the minor placing.

Casting Shadow is lightly raced having had 15 starts.

A group of Kyabram owners were also celebrating another win with star trotter Always Ready at the weekend.

The Anton Golino-trained fouryear-old made it four wins from four starts this campaign with another dominant win last Saturday night at Melton.

Former Shepparton reinsman Ryan Duffy drove Always Ready for the first time and completed a driving double with the win.

Cotchin geared up the smart performer Brackenreid and Betternbetter for wins.

Bendigo reinsman Haydon Gray piloted Brackenreid to his ninth win which has boosted his prizemoney to more than $71 000.

The Western Terror five-year-old has also racked up 22 placings, including 14 seconds, in his 55 starts.

Originally trained by Cotchin, who took him on a winning streak of six consecutive wins and seven wins in his first nine starts, Betternbetter has spent time with NSW trainer James Rattray.

But he didn’t win in four starts, so its been a good training effort by Cotchin to return him to the winners’ list in his first start since arriving back in his Elmore stables.

Consistent lightly raced pacer What A Pleasure was a winner at Kilmore last week.

What A Pleasure has never finished further back than fifth in her eight starts.