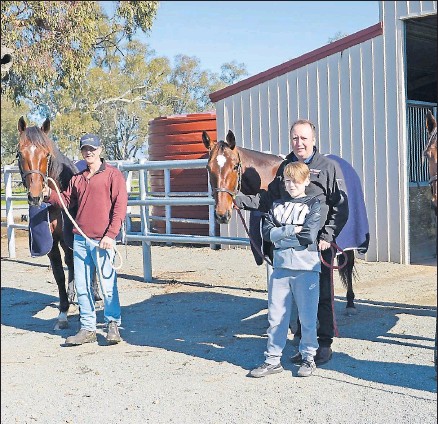 In with a shot: Trainer Patrick Ryan (left) and Starsbythebeach, pictured with her owner Martin Riseley and his son Sam, will be racing for big prizemoney at Melton tomorrow night.

Patrick Ryan will be represented by Starsbythebeach in the $210,000 APG final for four-year-old mares at Melton.

To be driven by Michael Bellman, the daughter of Somebeachsomewhere has drawn to run a big race from barrier two.

Starsbythebeach finished seventh in her heat at Melton last Friday night, but only 6m from the winner.

Danny Thackeray is also looking for a big pay day with Encryption who tackles the $50,000 APG consolation for four-year-old pacers.

To be driven by in-form reinsman Leigh Sutton, Encryption will be an outsider although he has only the five rivals.

Local eyes will also be on Menangle with Kyabram trainer Mick Blackmore chasing his second success in the NSW Trotters Oaks.

Blackmore will line-up Senitas Strength in the Group Two $40,000 feature.

The daughter of Muscle Mass hasn’t been favoured with her barrier seven draw, but the testing 2300m trip will be right up her alley.

One of five Victorians contesting the feature Senitas Strength will be driven by Victorian reinsman Chris Svanosio, who has a lot of success training and driving trotters.

Blackmore claimed the NSW Trotters Oaks in 2014 with Claudys Princess, who was driven to victory by the late Gavin Lang.

Owned and bred by Kyabram’s Darrel Pell, Senitas Strength has raced 11 times for two wins, three seconds and two thirds which have netted $33,000 in prizemoney.

With some added health issues Shepparton’s champion pacer Lochinvar Art will be in the spelling paddock for longer than expected.

Vets have advised a couple of months spell, but to be on the safe side connections have opted for a four-month break for the David Moran-trained five-year-old who went amiss preparing for the Miracle Mile at Menangle in February after winning the Hunter Cup at Melton.

Moran said the new setbacks weren’t career-ending, but were disappointing and frustrating.

Lochinvar Art became the most recognisable pacer in Australia over the last year with several Group One wins.

Moran said it was unlikely Lochinvar Art would race again this year, but had not entirely ruled out the Inter Dominion Championships at Menangle in December.

When you have been in the game nearly all your life Russell Jack appreciates the spoils which came his way last Saturday night.

Not only did Jack prepare the winner of the Group One $125,000 APG Gold Bullion for two-year-old fillies at Menangle in NSW, but also had two winners at the Melton metropolitan

‘‘Yes, that would have to be my most successful time ever in this game. It was a big thrill,’’ Jack said.

The Shepparton horseman rode about 50 winners in a brief stint in the thoroughbred industry before following a family tradition training and driving standardbreds in the Riverina before moving to Shepparton to train in 2003.

‘‘I had some success as a jockey for Jack Freer, who trained gallopers at Corowa back in those days,’’ Jack said.

Jack landed the heat-final double with Captains Queen at Menangle.

The daughter of Captaintreacherous had won her heat the previous week in a front running role and repeated the dose in Saturday night’s final.

Top reinswoman Amanda Turnbull, who has a strong association with the Jack stable, was in the sulky for the heat and final.

Jack said Captains Queen would now go for a well-earned spell before attempting more Group One successes later in the year.

Jack’s metropolitan winners at Melton were Sunny Weaver and Young Rooster, who were formerly prepared by Turnbull.

Sonny Weaver, who caused a false start, atoned with a perfect drive from Leigh Sutton who took the sit on the pacemaker in the run before sprint laning to victory.

It was the third win in six starts Sonny Weaver has had for Jack and the third time Sutton has been in the sulky.

Sutton was also at his best with a patient drive on Young Rooster, who was settled four back near the rear of the field and came with a sustained run over the last 400m to reel in his rivals in PB 1:58.0 mile rate time.

It was a win richly deserved as in his previous eight starts Young Rooster had racked up four seconds and two thirds.

Young Rooster’s latest success took his prizemoney to more than $98,000.

Almost, but not quite

For a f leeting moment it looked as if Techies Tyres Kyabram Pacing Cup was heading back to the town it was named after.

Kyabram horseman Gary Payne had sent the pacer he trains and drives El Boston to the front early in the race at the Kyabram Trots Club’s cup meeting at Shepparton last Sunday night.

The five-year-old son of Union Guy was travelling well with 500m to run, but in the straight couldn’t withstand the finishing burst of Rocknroll Noah with the favourite Dot The Eye battling on well for second, relegating El Boston to third.

But the cup meeting did produce a Kyabram winner.

The Brent Thomson-trained and driven Time To React finished over her rivals to claim her sixth win — there have also been four placings — in 25 starts.

Time To React’s win was popular with some loyal punters as she was a 14/1 shot.

A daughter of Auckland Reactor, Time To React was bred and is owned by the McGill family.

Improving trotter Kalarney Heidi made it two wins in her past four starts on the Shepparton track at the Kyabram meeting.

Punters who supported the sixyear-old into $2.90 favouritism weren’t on good terms with themselves when Kalarney Heidi made an early break and trailed the field.

But trainer-driver Damian Wilson was not only to catch the peloton on Kalarney Heidi, but proved equal to the challenge of getting up to win the race in a tough performance.

Bred by Violet Town veteran Brian King and owned by Peter Cordy, Kalarney Heidi is paying her way with five wins and 16 placings from 45 starts.

All the way Elenna

Six-year-old McArdle mare Elenna returned to the winner’s stall with a pillar-to-post performance at the Kyabram meeting.

Reinswoman Tayla French pushed on to take the early lead which proved the winning factor.

French was able to get some cushy mid-race sectionals and a 28.6 last quarter couldn’t be matched by her rivals in the run to the judge.

Heezalittlecaesar finished second, but 10m from the winner with the Gary Pekin-trained and driven Rocks Can Roll filling the minor placing.

It was the fifth win for Elenna who is trained by Elmore horseman Matt Higgins, who has trained the mare for all of her 55 starts.

The oldies staged a ding-dong battle in the Kevin Abrahams Memorial Trotters Handicap at the Kyabram meeting.

Nine-year-old Starlight Storm broke a run of 63 starts away from the winner’s circle when he won the stirring duel with grand old performer, the 11-year-old former pacer Hollys Miss Molly.

Starlight Storm, a Yankee Spider gelding trained by Bunbartha horseman Brian Bourke, had not won since a Shepparton victory on July 4, 2018.

High Flux had third placings at Echuca and Shepparton at his previous two starts and was ready to score his second win from 20 trips to the races.

Turnbull settled High Flux four back on the pegs in single file formation and outgunned the favourite and pacemaker Joeys Hangover and the runner-up Another Sparkie in the dash to the finishing post.

Time is on his side

Driving the three-year-old pacer he trains, Bide Our Time, Stewart settled the Bettors Delight gelding at the rear of the field for most of the 2190m trip.

But when he released the brakes 400m from home Bide Our Time put paid to his rivals in effortless fashion, cruising to the finishing line with nearly 11m to spare over Better Steam Ahead with Imperial Reason filling the minor placing.

Bide Our Time was making his debut as a three-year-old, having had two unplaced starts as a twoyear-old.

But punters were well aware of his ability and he was only a 5/1 chance on the tote.

Bide Our Time’s dam, the Northern Lights mare Bella Auroa, who had only five starts for a win and two placings, has been a broodmare gem with her 10 foals to race all winners, including Bellas Delight (20 wins and $442,000) and Rockabella Star (12 wins and $126,000).