Life’s a Beach for trainer Jeff 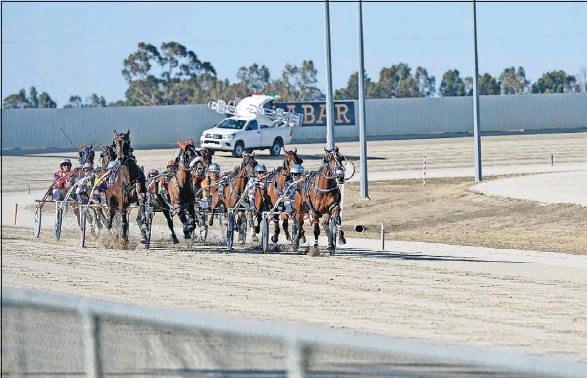 Congupna horseman Eddie Tapp scored a popular win with threeyear-old trotter Im Bobby, who took on and beat the older horses while the Darryn Rowney-prepared square-gaiter Cmon Car Lee, driven by Nathan Jack, gave another dashing front-running display to notch his seventh career win and third success in his past four starts.

Im Bobby, a son of Majestic Son, was slow out and settled three back on the pegs before taking a sprint lane run to reel in the pacemaker Starlight Storm and Dances who raced ungenerously in the home straight.

Cmon Car Lee again ran his rivals ragged in a front-running role to beat the 10-year-old Brian Bourketrained Starlight Storm to claim his third win in his past four starts.

Reinsman Brad Chisolm took Fantasy Beach to an early lead before handing up the front-running position and the seven-year-old son of Somebeachsomewhere ran down the favourite Delightful Nikki, who had faced the breeze for most of the trip, right on the finishing line to hoist his eighth career win.

Crossland gave Reckless Dream the run of the race on the back of the pacesetter Okinawa Beach and the five-year-old son of Sunshine Beach finished strongly along the sprint lane to notch his second career win from just the seven starts.

Watt claimed the training double with outsider For Tony and Fullofmischief who both scored front-running wins.

Eight-year-old Tintin In America gelding For Tony, a 17/1 shot, was driven by Tayla French and recorded his fifth career win from 36 tries while Taylor Youl partnered Fullofmischief to his win.

For Tony displayed blistering gate speed to cross his rivals at the start from barrier six and had just enough in hand to hold out the favourite Magnified to win by a short half head.

It was the pacer’s first win for 14 starts with his previous win recorded in August of last year at Stawell.

Fullofmischief also broke a run of outs with his win, the first since late September last year when he scored at a Charlton meeting.

David Aiken and Wayne Potter were other Goulburn Valley-based trainers to sample success at the Bendigo meeting.

The Aiken-trained and Josh Aiken-driven Patsy Valentine, having her second start in this campaign and only her 13th career outing, was a pillar-to-post winner over the 1650m trip in recording her fourth career win to go with five runner-up finishes.

The three-year-old daughter of American Ideal had put the writing on the wall for the win at her previous start when returning from a spell when beaten a short half head by Bettor Roll On on the same track on April 20.

Potter produced the confidently supported Allshookup for an impressive win with Nathan Jack in the sulky.

Jack pressed on at the start with the Rocknroll Dance five-year-old to take the front-running position and led his rivals a merry dance from then on to post his 10th career win and take his prize money earnings over $62,000.

Jack produced three-year-old filly Alanza and Ombra Artois for wins at the Swan Hill meeting last Sunday night and both were driven by Nathan Jack.

A daughter of Well Said, Alanza proved too good for her rivals after being given the run of the race in the one-one sit.

Alanza was previously prepared by NSW trainer James McPherson, who won four races and ran five placings with the pacer from just 12 starts. The Well Said filly at her previous start had finished third, beaten 6.6m at big odds, to the Jack-trained Just Hope in the Wagga Oaks on April 16.

The Jacks completed the double with Ombra Artois who was also having his first start for the stable.

Kyabram trainer Mark Watson has been bobbing up with winners of late and he produced another at the Sunday night Swan Hill meeting.

Casting Shadow was a winner at Bendigo three starts previously and has now won seven races with 10 placings from 36 race starts.

Veteran pacer Zuberi was rewarded for some recent solid performances with a win at last Saturday night’s Melton meeting.

Trained by Avenel’s Col Duncan and driven by Chris Alford, the nineyear-old son of Art Major finished strongly to account for the favourite Major Watson and Sammys Ideal in 1.54.9 mile rate time for the 1720m trip.

Zuberi had two third placings and a fourth at his previous three starts which had indicated he had his hoof on the winner’s till.

Duffy completed successive wins with Secret Identity who had saluted at Maryborough at his previous start on April 15.

Driver Bailey McDonough was able to hold the front-running position on Secret Identity, who notched his sixth career win and his third since he has been in the Duffy stable.

Tormey dictated terms in front and the Art Major three-year-old gelding streeted his rivals over the concluding stages to beat the runner-up Cee Cee in America by nearly 20m in a dashing display.

There must be something in the water up at Mildura.

These wins followed the recent Shepparton win by the Nathan Jack-driven and Kate Hargreavestrained Tex Goes Bang who was also a 150/1 shot.

Crossland partnered the Dave Farrar-trained warhorse Hayjoshandco to his 20th career win and also got the chocolates on NSWtrained pacer Sporty Dancer. Both started favourite. Crossland gave Hayjoshandco the run of the race on the back of the pacemaker Tigerphinn and sprintlaned to an easy win.

It was the 11th track Hayjoshandco has won on and his proud owners Stewart and Pam McDonald have witnessed all but two of his 203 starts and 19 of his 20 wins.

It was the fourth time Crossland has won on the 10-year-old Hayjoshandco but it was the first time he had partnered Sporty Dancer.

Ross a star on the rise

Harness Racing Victoria’s Nikkita Ross has been selected to take part in the second round of the 2021-22 Change Our Game Women in Sports Broadcasting Program.

The program aims to address a lack of gender diversity in sports broadcasting, with a focus on enhancing and refining broadcasting skills, including research and preparation, play-by-plays, presenting opinion pieces, and delivering trackside updates.

Nikkita, the daugher of Shepparton’s Wendy and Jason Ross, made a huge impression when appearing on Racing.com’s Hunter Cup coverage earlier this year.

Shepparton’s Helen Head’s long contribution as a breeder and owner in the industry was recognised at the HRV’s awards night last weekend when she was awarded a Distinguished Service Medal.