HORSE OF YEAR HONOUR FOR CHAMPION 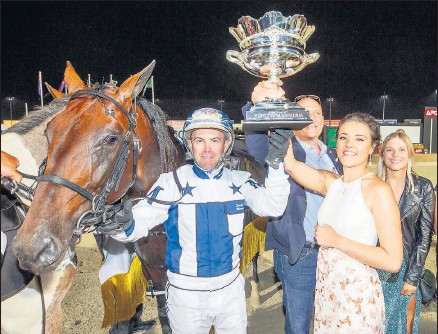 He’s the man: Lochinvar Art, trained and driven by David Moran, pictured after winning the Vicbred Super Series final, has won the Victorian Horse of the Year award.

Shepparton-trained pacer Lochinvar Art has added more accolades to his already impressive list, including being named Victorian Horse of the Year for the 2019-20 season.

The now five-year-son of Modern Art, trained and driven by Shepparton horseman David Moran, earned the honour in his four-year-old season, claiming the award ahead of outstanding trotters Tornado Valley and Pink Galahs.

In the 2019-20 season Lochinvar Art had 13 wins from 19 starts, accumulating a little more than $500,000 in stakes with wins in the Victoria Cup, Chariots Of Fire, Vicbred Super Series final and the Four Year Old Bonanza, in which he held off Self Assured to win in a track record 1:48.6.

The awards were announced in a virtual Gordon Rothacker Medal ceremony on Sunday.

“He’s turned out to be the people’s horse, he’s got the X-factor and we’re very excited to win this award,” Lochinvar Art’s owner Kevin Gordon told the broadcast.

Joint winners of the Gordon Rothacker Medal — the most respected individual industry accolade in Victoria named in honour of the legendary horseman — were Keith Pratt and Paul James.

Both have spent decades serving the industry.

Bendigo-based Pratt is a humble horseman who earned success on the track and off it.

Pratt goes back to the 1960s in the trots industry after initially being involved in thoroughbreds.

He obtained his trainer’s licence in 1965 and continues to train a team from his private track at Bendigo today.

He progressed to enjoy success as a breeder, owner, trainer and driver at every race track in Victoria, including the Melbourne Showgrounds..

James has been involved in the trotting industry as an owner and breeder, club official, executive member of club representative bodies, advisor, mentor, advocate and fan for more than 40 years.

He was first elected to the committee of the Ballarat and District Trotting Club in December 1981.

It is only the second time two winners have been awarded with Elizabeth and Bruce Clarke getting the joint honour in 2008.

Victorian Horse of the Year Awards:

Horse of the Year — Lochinvar Art. 4YO Pacing Entire-Gelding:

3YO Trotting Colt-Gelding: Cover Of Darkness.

4YO Pacing Mare: Our Princess Tiffany.

Top of his class

A trotter with Kyabram interests has carried off one of Harness Racing Victoria’s 2019-20 awards.

Kyabram’s Phil and Trudi Plumb, Stuart Laidlaw, Terry Gregory and Geoff Berry are in the syndicate which races the now five-year-old trotter who won 11 of his 15 starts and $127,000 in his four-year-old season.

Despite missing his three-yearold season with injury his impressive career record now stands at 15 wins, five seconds and one third from 28 starts which have netted $245,000 in prizemoney.

By French sire Ready Cash out of the Yankee Paco mare Class Of Her Own, who was no slouch on the racetrack with eight wins, will resume his racing career tonight at Ballarat.

He has not raced since early March and meets a hot field in the $25,000 John Slack Memorial Trotters Cup.

Sand in their face

Seven-year-old pacer Boy From Bondi notched his eighth win for the season when he saluted at Kilmore on Saturday night.

Reinsman Josh Duggan produced a gem of a drive on the pacer, stalking the pacesetter Struve before pushing into clear running on the home bend and then dashing away from his rivals.

Boy From Bondi’s eight wins this season are from 17 starts the pacer has been given by Avenel trainer Wayne Potter.

They included four successive wins when Potter first took over the training of the son of Somebeachsomewhere, who had also won five races when prepared by fellow Avenel horseman Ian Montgomery.

The Steve O’Donoghue-Bec Bartley team has a habit of bobbing up with a smart pacer and they may have another one of their hands in Barnaby, who debuted with an impressive all-the-way win on Wednesday night at Shepparton.

Punters were well aware of Barnaby’s ability through some impressive trial form and he lived up to it after being urged to the front early by Bartley.

Although it’s early days for the three-year-old, who is by The Panderosa stallion Panspacificflight out of the Artsplace mare Art For Artsplace, it was an impressive debut.

Avenel horsewoman Juanita Breen would have got a lot of satisfaction out of the win of Royal Starzzz, who led her rivals a merry dance to win at Shepparton.

Breen and her partner Aaron Brown bred Royal Starzzz who is by Four Starzzz Shark out of the Courage Under Fire mare Sayalittleprayer.

Royal Starzzz showed some toe off the gate to lead her rivals from barrier five and had nearly 8m to spare over the runner-up and favourite, the Ian Ward-trained and Laura Crossland-driven favourite Cutty Shark at the finish.

Adding more merit to the win was the fact Royal Starzzz was having his fourth start, his first outing as a three-year-old and first since December.

Breen got away with some cheap early sectionals dictating the pace which made for a moderate overall mile rate, but Royal Starzzz pulled out a 57.9 last half to underline his talent.

Talented and consistent trotter Bad As Now broke a frustrating run of minor placings to claim his third win when he saluted at Shepparton on Wednesday night.

In his past six starts the son of Bad Boy Truscott, bred by Violet Town veteran trainer Brian King and owned by former football umpire Peter Cordy, had not finished further back than third, so the win was well deserved.

Trainer-driver of Bad As Now Damian Wilson stalked the pacemaker Majestic Achiever and was able to sprint over the favourite Kyvalley Surfrider when he got into clear running 50m from the judge.

Bad As Now has had only 22 starts which have now produced three wins and 10 minor placings.

Elmore-trained pacer Madam Reactor followed up her Echuca win at her previous start with a commanding win at Shepparton.

The Frank Barac-trained fouryear-old daughter of Auckland Reactor was sent straight to the front by reinsman Jayden Brewin and raced away from her rivals at the business end of the race to beat the runner-up Changeover Girl by nearly 15m in 1:57.2 PB mile rate time for the 1690m trip.

Madam Reactor, who is out of the seven times winning Blissfull Hall mare Madam Altissimo, has now won four of her 33 starts which have also produced 10 minor placings.

Four-year-old pacer Spencer completed successive wins on the Shepparton track when he won on Wednesday.

The son of Courage Under Fire sprinted over his rivals at the business end of the 2190m race to follow up his win on the track at his previous start on July 21 over the shorter trip of 1690m.

Trained by Merrigum mentor Brett Bunfield, Spencer has had 10 starts which have produced three wins and two minor placings and looks a pacer with a future.

Bunbartha horseman John Newberry was a contented trainer after the running of the Barastoc Vicbred Pace at Shepparton.

Newberry produced the winner Shez Elite and the third placegetter Tweet About It over the 1690m trip.

Shez Elite was driven for the first time by Greg Sugars, while Newberry’s son Matt partnered Tweet About It.

Separating the Newberry pair in an all-district finish was the Brian Crossland-trained and Cody Crossland-driven Bee Cee Gee.

Shez Elite put up the toughest run of the meeting, parked outside the pacesetter Hayjoshandco before hitting the front straightening for the run to the judge and then holding all rivals at bay in a gutsy performance.

It was the six-year-old Village Jolt mare’s fourth win in 51 starts, but she has also been placed 18 times.

Received a call from a reader who wanted to know if Melbourne Cupwinning trainer Danny O’Brien had taken up preparing harness horses as well as thoroughbreds.

He had noticed the winner Sir Eros of the first event for two-year-old trotters at Maryborough on Monday was trained by a Danny O’Brien.

I assured the reader that it wasn’t the thoroughbred trainer, who was raised in Kyabram, and that Danny O’Brien the harness racing trainer hails from Armstrong near Ararat which is a fair way from the Flemington base of his namesake.

A return of trots racing to the Melbourne Showgrounds is shortening in the betting.

Harness Racing Victoria chief executive Dayle Brown has confirmed talks were ongoing with Victoria Racing Minister Martin Pakula and the Royal Agricultural Society of Victoria, which owns the showgrounds as being fruitful.

The main issue is the footprint of the Heritage buildings which at the moment allows only for about a 740m track and with the speed horses possess today a track of at least 900m would to be needed to be viable.

The showgrounds were Melbourne’s harness racing home from 1947 to 1976 when racing was moved to Moonee Valley and now to its latest home at Melton.