AIKEN-TRAINED MARE DOES IT TOUGH WAY, BUT PROVES TOO GOOD IN WINNING LA COOCARACHA FEATURE 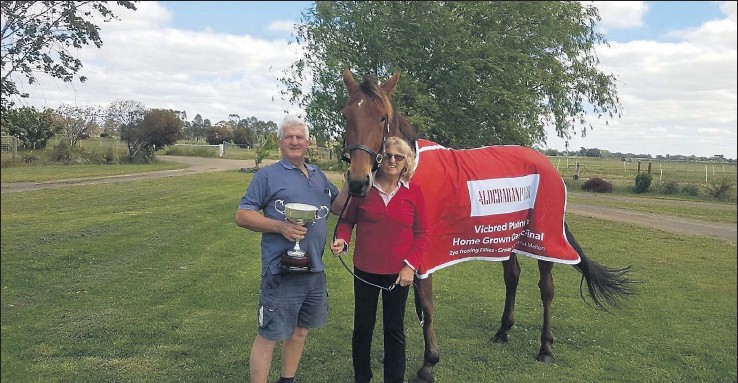 Going for gold: Harston trainer Dennis Paton and his wife Shirley, pictured with their Group One winner Sheza Pleasure, will be chasing more Group One glory with Jessies Son in the $50,000 Home Grown Classic for two-year-old trotting colts and geldings at Melton tomorrow night.

None of Aldebaran Crescent’s rivals for the 1609m race, exclusively for mares, could offer any excuses as Aldebaran Crescent, driven by reinsman James Rattray, faced the breeze in the run and defied all efforts to be run down once she hit the front.

Finley owners Ashley Haynes and Chris Shaw bred and race the Chris Svanosio-trained and driven Peregrine Phoenix who made the pace in the race and battled on well to finish third.

A six-year-old by top sire Majestic Son, Aldebaran Crescent had won her previous start at Melton and boasted a record of 10 wins and six minor placings going into the race.

Aiken said Aldebaran Crescent was a mare who had kept on improving with racing.

In the other big trotters race on the night at Menangle, the NSW Trotters Oaks, the Kyabram-trained Senitas Success ran a credible fifth behind the locally-trained winner Aldebaran Ursula, a daughter of Swedish sire Yield Boko.

Sutton was able to secure a oneone sit for the last lap on Driffing, who proved too good for his rivals over the concluding stages.

A third placing at Shepparton two starts previously indicated Driffing was ready to shed her maiden status at her 14th try.

Driffing missed most of last year when she had only the one start in December and is lightly raced and didn’t make her debut until she was four-year-old.

Martin said Driffing had plenty of problems which he had to sort out when he took over her training and she needed to be handled with kid gloves.

‘‘Hopefully we have got her where we want her now,’’ Martin said.

Martin said her work in the lead up to Cobram had convinced him she was ready to run a big race — even win.

Echuca-trained pacer Cobber Mac doesn’t win out of turn, but it was his turn again at Cobram.

Before Monday the Fred McKenna-prepared Gotta Go Collect eight-year-old gelding had his last win 29 starts previously on February 7 last year on his home track at Echuca.

But coming off two second placings and two fourths at his previous five starts convinced punters he was ready to salute again.

And those who backed up their prediction with cold cash were on good terms with themselves when reinsman Jack Laugher ushered Cobber Mac straight to the front from his poleline draw.

He was able to hold out another Echuca-prepared pacer Lagom and the Gary Pekin-trained Rocks Can Roll in the run to the judge.

Cobber Mac has only the three wins from 51 starts, but has had 15 minor placings as well.

The Potter-trained four-year-old Art Major gelding Stanbyme scored his third win in his past seven starts with his all-the-way success.

Driven by Josh Duggan Stanbyme worked to the lead at barrier rise and comfortably held off the consistent Bryan Johnstone-trained Justcallmeaza and Yarrawonga Lassie in the dash to the finishing line.

Stanbyme has been consistent with four wins and eight minor placings from 24 starts.

Aiken produced the Art Major filly Kekoa for a win at her first start.

With Josh Aiken in the sulky and giving Kekoa the run of the race in the one-one sit the filly got the better of a host of late challengers from Made To Rock, Night School, Cheez and Dallas Patrick.

Goulburn Valley trainers will be seeking Group One glory with young trotters at Melton tomorrow night.

Harston trainer Dennis Paton has Jessies Son coming from barrier two in the $50,000 Home Grown Classic for two-year-old trotting colts and geldings, while youthful Kyabram horseman Wes Shellie lines up Hey Karla in the fillies final of the series.

Legendary reinsman Brian Gath will drive Jessies Son, who is having his second start.

Josh Aiken has the steer on Hey Karla, who has a tricky outside front row draw, but some consistent recent form to say she is capable of making her presence felt.

Murchison horseman Shaun Kittel will be represented by the consistent The Last Chance in the $30,000 Group Three Country Clubs Championship final.

The pacer, who will be driven by Michael Bellman had no luck in the draw and comes from barrier seven off the front row.

Another interesting runner from the Goulburn Valley at the meeting is the Isabel Walsh-trained Viva La Rock who tackles the E K Bray Country Clubs Cup final.

To be driven by Chris Alford, Viva La Rock is shooting for four straight wins, but has to overcome an extreme outside front row draw.

The promising Locksley Lover got the ball rolling in claiming the three-year-old trotters race for trainer John Nissen and driver Bec Bartley.

Heavily supported Locksley Lover settled midfield in the running line and although forced to race three wide for most of the final lap had no problems in disposing of his rivals in impressive fashion.

A son of top sire Love You, Locksley Lover was having only his third start and was coming off a win at Yarra Valley at his previous start when also impressive.

His mile rate of 2:02.4 in his latest win was also impressive and the quickest of the trots races.

Merrigum horseman Luke Bryant was next to strike, producing Violetta Gift to win a maiden trot at her sixth try.

A five-year-old mare by Andover Hall out of the multi-winning Sundon mare Shez Alrighty, Violetta Girl tracked the favourite and pacemaker Theyallendiny and when he drifted up the track she seized the moment and dashed to a commanding win without leaving the pegs.

It was a well deserved win as her previous five outings had produced four top three finishes.

It was the four-year-old Imperial Count mare’s first win in 13 tries, but with four second, two thirds and three fourths in her form the win was anticipated by punters who sent her out a $2.70 favourite.

The race was virtually all over at the start when Newberry took up the front running on Bella Contessa from her barrier two draw and was never headed.

Reinswoman Abbey Turnbull made full use of Junior Warfare’s poleline draw and produced a pillar-to-post win on the four-yearold son of Village Jolt.

Junior Warfare has been racing in good form with his previous three starts producing two seconds and a win at Echuca.

The four-year-old has now faced the starter 30 times for three wins and eight minor placings and has only missed a top three finish twice in his past 11 starts.

Gunbower hosts a nine-race program on Sunday with a heat of the Platinum Mares Sprint Championship the feature.