Making pretty good fist of it 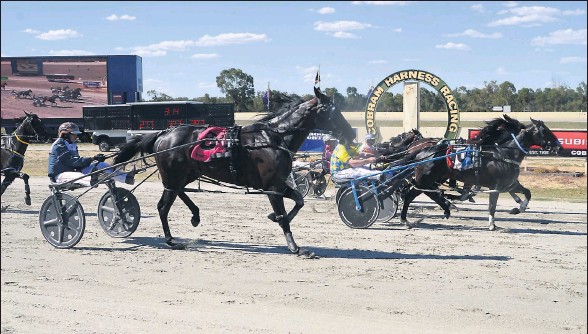 Kyabram horseman Brent Thomson has been enjoying his share of success after taking over the training reins from his father Russ nine weeks ago.

Russ suffered multiple rib fractures in a training mishap in early November and Brent was summoned to add his father’s horses to his small team as well as juggling his day job with the State Rivers.

No rookie to the training ranks, having followed in his father’s career path from a young age, Brent has certainly made a good fist of preparing his bolstered team.

His latest win came at Cobram on Sunday when he produced trotting mare Prettylilangus for her second win at her 33 start.

There have also been 12 minor placings including 10 runner-up finishes.

Coming off second placings at Echuca and Shepparton, the fiveyear-old daughter of Angus Hall, driven by Ashley Manton, finished all over her rivals in 2:02.2 mile rate time.

Prettylilangus is out of the extra smart former Russ Thomsontrained mare, the 15 times winner Prettylilangeleyes, who won more than $100,000 in prizemoney.

Hoofnote: Russ Thomson said he was making steady progress in his recovery from his ordeal and hopes he can resume training in the near future.

He has been one of the Goulburn Valley’s most successful trainers down the years and has prepared some top pacers and trotters.

Driving and training honours at Cobram were achieved by Avenel horsewoman Juanita Breen.

Talented four-year-old mare Yarrawonga Lassie delivered a popular win for her breeders and owners David (Jack) and Linda Gale, who live in the Murray River town the pacer has been named after.

Winless at her previous nine starts, but with five top four finishes in these outing plus a suitable draw enticed punters into supporting the daughter of Heston Blue Chip into odds-on favouritism.

She duly delivered with a pillarto-post

The John Newberry-trained Lombo Idle Belief ran a bold race to finish second, while the eyecatching run in the race was turned in by the Michael Watt-prepared and Doc Wilson driven Fullofmischief who rocketed home for third.

Breen pushed on from the start from a wide barrier draw on Louisiana Jo who then defended the lead to the finishing wire.

It was the Rock With Joe fouryear-old mare’s fifth win in 15 starts. so she is more than paying her way.

successive second placings at Shepparton at her two outings prior to that.

On the strength of that form punters were on her side, supporting her into odds-on favouritism.

Driven a patient race by top reinsman Chris Alford, Melinka came from near the rear of the field to swamp her rivals at the business end of the race, accounting for the John Newberry-trained and driven Feeling Energetic and Wandanas Advice, who did a lot of work in the race and battled on well to hold the minor placing.

Interesting winner at the Albury meeting on Tuesday night.

The well-named Confuse Me, trained by Paul Brown and driven by Royce Gregory Jack, saluted at his second start.

The 20/1 on offer about the three-year-old’s chances delighted punters who decided to risk a few bob, but the win was a bit more intriguing for the breeding buffs.

Confuse Me is by the former Australian Trotter of the Year Im Stately — a son of boom sire Majestic Son — who won that title after sweeping all before him in his two-year-old season.

Trained and driven by Euroa horseman David Jack Im Stately raced 20 times for 13 wins and six minor placings for nearly $250,000 in prizemoney before injury ended his days on the track.

Confuse Me’s dam Bed Socks, who won 11 races and has left one other winner, is where he gets his pacing blood from.

Bed Socks is by the talented pacer Knight Rainbow, a son of another top race track performer Tuapeka Knight, a winner of 12 of his 14 starts.

While back with his trainer these days Im Stately has 62 of his progeny at racing age and three winners from 11 of these to make the races so far.

All eyes on him

There will be more than the average interest when trotter Sunofatrump steps out at Melton tonight.

Trained by Bendigo horsewoman Maree Campbell, Sunofatrump had his first start since August 2018 at Melton on January 2 and proceeded to put paid to his rivals in audacious fashion.

The win, the seventh of his 72 starts in which there have been 21 minor placings, took his prizemoney earnings to more than $50,000.

Sunofatrump has only five rivals in tonight’s race and should be hard to beat again if he repeats his return-to-racing effort.

All roads lead to Shepparton Saturday night for the cup meeting.