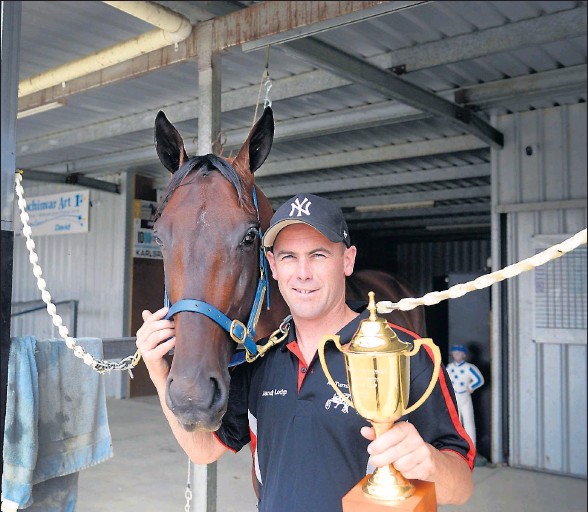 Out for glory: Lochinvar Art and trainer David Moran will be out to claim Vicbred Super Series Group One finals glory at Melton on Thursday.

The David Moran-trained pacer will start a short-priced favourite to win the $130,000 four-year-old entires and geldings pacers version of the series after drawing barrier one.

Moran has been happy with Lochinvar Art since his effortless semi-final win and has plenty of options with the barrier draw if he doesn’t hold the front running position.

If the Modern Art gelding wins he will take his prizemoney earnings to the cusp of $1 million with the $61,000 first prize tonight.

While Moran has the hot favourite, Avenel trainer David Aiken will line up three runners — Reactor Now, Malcolms Rhythm and Major Delico — in the same final.

Aiken’s reinsman son Josh may have given punters a lead by electing to drive the well-drawn Reactor Now, but if Lochinvar Art leads Malcolms Image, who will follow him out from an inside second row draw, should enjoy a good passage in transit.

Aiken also has Lunar Delight contesting the $130,000 final for four-year-old pacing mares. Moran is in for a busy night. He also partners Ifitstobeitsuptome, who he trains, in the $130,000 two-year-old colts and geldings pacers final and the unbeaten Emma Stewart-trained hot shot Ladies In Red in the twoyear-old pacers fillies final.

Russell Jack also has the talented Spring In His Step in this final, but the three Shepparton-trained runners have to overcome second row draws.

The favourite in this final, the Clayton Tonkin-trained Major Moth, will be driven by Byrneside horseman Damian Wilson, who has partnered the exciting youngster to his six wins from eight starts.

Euroa horseman Cameron Maggs lines up Super Service from the pole in the $100,000 two-yearold trotters colts and geldings final, while Rochester horseman Neville Pangrazio has qualified Cashflow Cassie for the two-year-old pacers fillies final and Willdomxav for the three-year-old colts and geldings trotters final.

Harston mentor Denis Paton will be represented by the talented recent Group One winner Sheza Pleasure and Elmore mentor Keith Cotchin by Meadowvalley Lover in this final.

Both are drawn to be the action. Merrigum mentor Brad Aylett has Bahoon contesting the fouryear-old mares trotters final along with the Mark Lee-trained Miss Tipsy, who was an emergency, but has secured a run after a scratching.

In the four-year-old entires and geldings $100,000 trotters final Tatura trainer David Abrahams has his hopes resting on one of the outsiders, Hate it when your rite.

In the three-old-trotters fillies final Avenel mentor Juanita Breen looks to have genuine each-way claims with the promising Golden Sunset who has drawn barrier two.

Arcadia horseman Patrick Ryan will be represented by Cracker Jet in the $100,000 three-year-old colts and geldings trotters final and with a barrier two draw looks to have bright each-way claims in a tough race.

? It won’t be as busy as the halcyon days of its biggest meeting of the year, but Echuca Harness Racing Club is geared for its annual New Year’s night meeting tomorrow.

A crowd cap of 1000 patrons has been placed on the meeting, meaning it will be the best attended meeting since the COVID-19 restrictions were introduced in March.

As in the past there will be offtrack entertainment, including live music and a punters’ club plus catering.