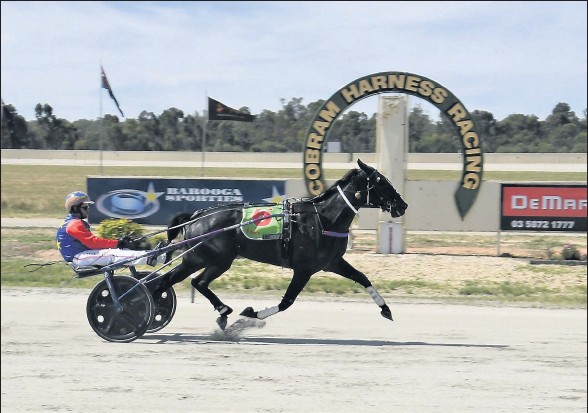 Fair run of form: Majic Fair wins at Cobram earlier this month — she has since duplicated the effort.

Northern Victorian trainers missed out, but drivers and owners from the area shared in some rich spoils in finals of the Breeders Crown series last weekend.

Drivers Damian Wilson and David Moran snared the gold medals in the two main features, the $300,000 two-year-old fillies and colts and geldings finals.

Wilson partnered the Clayton Tonkin-trained Major Moth to win the colts and geldings final, while Moran partnered the unbeaten Ladies In Red to take the fillies final.

Trainer-driver Amanda Turnbull was also a winner at the Saturday night meeting, partnering the Emma Stewart-trained Hurricane Harley to a track record equalling all-the-way win in defeating the gallant Moran-trained and driven favourite Lochinvar Art in an epic contest.

Lochinvar Art who did all the heavy lifting in the race lost no admirers with his second placing.

District owners also savoured success at the meetings on Friday and Saturday night.

Merrigum’s Greg and Jenny Pell celebrated their biggest win in the sport when their pacer The Panthiest claimed the $200,000 Breeders Crown three-year-old fillies final.

Making the win even more sweeter was the owners also bred the filly.

The Panthiest had six wins from 17 starts going into the final and used the sprint lane to down the pacemaker and favourite Sweet Louise to snare the $100,000 first prizemoney.

Because of COVID-19 restrictions the Pells were not at the meeting, but cheered home The Panthiest in their lounge room while watching the Sky Channel coverage.

The Panthiest is by top sire Bettors Delight out of the smart and multiple winning Art Major mare Paintball and is a half-sister to the smart youngster Holi Starzzz, a winner of four races from 12 starts.

She is trained and driven by Monegetta horseman David Miles who has a lot of success over the years with horses owned by the Pells.

Also savouring Breeders Crown success at the weekend was the Kyabram members of the syndicate which race the extra smart trotter Always Ready.

Members of the Kyabram syndicate with ownership shares in Always Ready are Phil and Trudi Plumb, Geoff Berry, Terry Gregory and Stuart Laidlaw.

Shepparton horseman David Moran was certainly the man of the moment at Monday’s Cobram meeting, landing a staggering five winners.

But it wasn’t a first for the skilled reinsman.

‘‘I drove five winners a few years back one night at Albury and I had four or five at a Wagga meeting,’’ Moran said reflecting on his feat.

Two of his winners — Redbank Cooper and Angelic Miss — were on horses he’s training chasing Victoria bonuses, while the other three were on outside drives.

‘‘They (Redbank Cooper and Angelic Miss) are heading back to NSW now,’’ Moran said.

Moran struck the first of his five winning blows in the second race on the Russell Jack-trained Major Angel who beat the Don Ruddtrained Bundle Of Notes and the Isabel Walsh-trained favourite Vintage Blu in comfortable fashion.

Moran was back in the winner’s circle in race three, partnering an outsider, the Geoff Allen-trained Sassyfeet, to a dashing win over the Darryn Rowney-trained and Laura Crossland-driven Lasting Bond and the Matt Higginsprepared Lilnova.

Sassyfeet’s winning mile rate of 1:56.2 was a PB and the quickest run of the meeting.

Moran revisited the winner’s circle on Redbank Cooper in the next race before landing the Kasey Kenttrained Reckon Im Smart in the following race to make it four wins in the first five races on the 11-event card.

Two races later in race seven Moran landed the second winner from his barn when Angelic Miss completed his winning spree for the day.

Moran kept the winning momentum going at Bendigo the following night when he scored with the well-travelled pacer Midnight Queen, who was having her fourth start for the Shepparton horseman.

A little bit of Majic

David Moran was not the only Goulburn Valley trainer or driver to produce winners at Cobram.

The talented Steve Duffy-trained and Ryan Duffy-driven trotter Majic Fair showed her liking for the track and won her second race on the circuit in her past three starts when she upstaged a nice field of trotters to claim her fifth win.

Ryan Duffy then completed a driving double, partnering the consistent Keith Cotchin-prepared Rocknroll Noah to his 10th win and his first win for 17 starts.

The Brett Bunfield-prepared Causin Strive struck another blow for district trainers when driven by Doc Wilson to her second win on the track in her past three outings, while Congupna horseman Mark Lee produced towering mare Rebellin Ruby for her ninth win with a powerful finishing burst.

Perseverance with a top sire seems to have paid off in the case of two-year-old pacer Fly Bye Eden.

The Ian Ward-prepared filly is the first of four fillies by top sire Art Major out of the Armbro Operative mare Tombstone Eden to race.

Fly Bye Eden was having her third start last week at Echuca after placings at her only two previous runs. She was favourite to win — and did.

In a tight finish Fly Bye Eden, driven by Laura Crossland, got the better of the David Aiken-trained Smoke My Motor and the Craig Turnbull-prepared debutant Heritage Lady who both indicated coming wins with their performances.

Fly Bye Eden’s dam Tombstone Eden was a more than handy track performer winning 10 races, while her second dam Eve Of Eden (by Dalrae) also was a multiple winner.

In fact her first four dams were all winners.

The High Roller had had only two top three finishes in his previous 17 starts in 125 starts before stepping out for Godden for the first time last week at Echuca.

Driven by Abbey Turnbull the noted frontrunner turned back the clock to lead his rivals a merry dance from start to finish to return to the winners’ list and hoist his 14th win.

A seven-year-old son of Christian Cullen, The High Roller has now amassed more than $105,000 in prizemoney from his 14 wins and 31 placings.

Co-trainer and driver Bec Bartley made a winning move at the 1400 m mark when she sent Rockon Locksley to outside the pacesetter Imapest and getting the better of that pacer near the finishing line with a gutsy performance.

Rockon Locksley who is owned by Locksley horseman John Nissen had his previous win seven starts previous at Shepparton on July 15.

The Weidenbachs were in the winner’s circle — twice — last week at Echuca.

Two pacers from their stable, Awayovernight and Rolling Along, broke long spells from the winner’s circle with wins.

Rosie Weidenbach trains Awayovernight, who was driven by Daryl Douglas, to his first win since scoring at Maitland in August last year — 29 starts ago.

Rosie’s hubby Paul completed the family double with Rolling Along, who had his last win in November 2018 at Newcastle — that was 26 starts previously.

Rolling Along was driven by Kevin Weidenbach Jr who showed his delight with a salute at the finishing post.

Kyabram-trained pacer Esterna made a winning return to racing at Bendigo this week.

The Mark Watson-prepared and Ellen Tormey-driven three-yearold daughter of Art Major secured a run on the sprint lane from four back on the pegs to notch her second win from 19 starts.

Esterna, who was having her first start since winning at Shepparton in mid July, rated a slick 1:54.9 mile rate for the 1650 m trip.

Shepparton hosts a huge 12-race card on Sunday evening and will also host a meeting on Thursday.