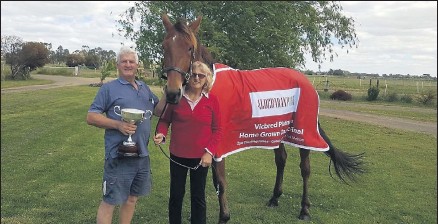 What a pleasure: Dennis and Shirley Paton with their Group One winning two-year-old trotter Sheza Pleasure.

Harston horseman Dennis Paton experienced his first Group One success in a lifetime in the industry when his young trotter Sheza Pleasure caused an upset to win the Aldebaran Park Vicbred Platinum Home Grown Classic for two-yearold trotting fillies at Melton on Saturday night.

The daughter of Bacardi Lindy picked the right night to open her winning account at her ninth start, pocketing the $25,000 first prizemoney in the Group One $50,000 feature.

And nobody could say Sheza Pleasure didn’t deserve her win after simply out-toughing and outclassing her rivals.

In a daring move reinswoman Kerryn Manning took Sheza Pleasure from near last to outside the leader and second favourite Keayang Xena approaching the bell lap over the 1720 m trip and she responded bravely in the home straight to wear down Keayang Xena with the favourite Evas Image finishing third after enjoying the run of the race.

Sheza Pleasure had run a huge second in her heat at Maryborough when second to Evas Image after missing the start at her previous start, but was ignored by most punters and was a $19 chance.

Paton said he had left Manning to make her own decisions in the race and the move to sit outside the leader for the last lap was not premeditated.

‘‘I thought she was going to be very hard to beat after her heat when she lost at least 50 m when she broke at the start and got up to run second,” Paton said.

“Her work since then had been really good and I was a bit surprised what price she started at.’’

Paton, who has been in the game for more than 50 years as trainer, driver, owner and breeder said it was officially his first Group One success.

‘‘I had a horse called Grand Polly who won the NSW Trotters Derby when driven by Cyril Caffyn in 1983, but it wasn’t recognised a Group One race then.’’

Paton said the Redwood Classic at Maryborough on Sunday week would be Sheza Pleasure’s next mission.

The Vicbred and Breeders Crown series will be her targets after the Redwood Classic.

Sheza Pleasure is out of the unraced Sierra Komos mare Sheza Comment who has left three other winners.

One of those winners is Millys Magic, bred by Paton and his wife Shirley, who made it a memorable night by winning at Globe Derby the same night.

It was a case of ‘‘well, well’’ literally after the first race at last week’s Shepparton meeting.

Well Well happens to be a fouryear-old pacer trained by Rosie Weidenbach and driven by her son Kevin Jr who dealt a first-up blow to punters playing the early quaddie.

Despite running second at his previous start on the track four days earlier punters ignored Well Well who was nearly 50/1 on tote.

Junior brought the four-year-old son of Well Said with a well-timed run to knock over the Wayne Pottertrained $1.40 favourite Tuakana by a head with the Gary Merkel-trained Argy Bargy battling on well for third after a death seat run.

Four-year-old pacer Life inquestion made her first start in a race a memorable one when she saluted on debut at the Shepparton meeting.

The Betterthancheddar mare, trained and driven by Kyabram horseman Brent Thomson, was driven a treat to land the money.

Life inquestion is only the second foal to race out of the Life Sign mare Life in the country who has also left the multiple winner Live in heaven, bred by the late Col Dixon and his wife Merrilyn, close friends of the Thomson family.

Merrigum mentor Luke Bryant has had his moments with his talented trotting mare Lexington Queen, but it all seemed worth it at Shepparton last week.

The six-year-old CR Commander mare finished strongly to take the Barastoc Trot in impressive style in her second start in this campaign.

Lexington Queen has had 10 starts which have produced two wins and four minor placings.

Also revealing her undoubted talent was her impressive winning mile rate of 2:02.9 for the 2190 m trip.

Lexington Queen powered to the line to beat Majic Fair and Bacardi Wood in a busy finish in which only 5 m separated the first four placegetters.

Impressive former Kiwi Pats Dragon completed the hat-trick of wins in Australia with another top performance at Shepparton last week.

After coming from last the Amanda Turnbull-trained and driven six-year-old son of Ohoka Arizona unleashed a sustained run three wide over the final 1000 m, beating Dearest and Wenthestarz-zzaline in a brilliant 1:55.6 effort over the 1690 m trip.

After two runner-up finishes at her previous two starts, talented fouryear-old trotting mare All woods Sunbeam got the win she thoroughly deserved at Shepparton last week.

Trained by Clive Dalton and driven by Josh Aiken her win was also popular with punters who sent her out the $2.90 favourite.

Aiken drove a typical patient race and when he released the brakes on the home turn All woods Sunbeam quickly put paid to her rivals in the easiest win of the meeting.

It was the sixth win for the daughter of Majestic Son whose 49 starts have also produced 16 minor placings.

The daughter of Well Said, driven by James Herbertson, was most impressive in winning.

She was caught wide outside the leader, but got cover in the last lap before storming over several pacers fighting for the lead in the home stretch.

Covered Kylie had been there or thereabouts in her previous nine runs and had run third at her previous start Kilmore, but still paid a generous $20.30 for the win in slick 1:56.6 mile rate time for the 1609 m dash.

Three-year-old pacing filly Attention Seeker was also impressive in her win in a blanket finish.

She had to be urged along in a front running role by driver Michael Bellman for most of the trip, but found plenty under pressure to keep her rivals at bay in a blanket finish.

By Somebeachsomewhere, Attention Seeker gave a sample of her ability in her previous and first start when she ran third at Echuca on October 6.

Zooming to the front from barrier two, Peregrine Phoenix led throughout over the 2200 m trip to space her rivals, beating the runner-up, the Tongala-trained Dynamic Legacy, who was solid in his return to racing, by more than 16 m.

Peregrine Phoenix, bred and raced by Finley butchers Ashley Haynes and Chris Shaw, had won at her previous starts at Shepparton and Cranbourne.

Chris Svanosio trains and drives Peregrine Phoenix who returned a PB mile rate of 2:00.2 in her impressive win.

Out of the Malabar Maple mare Maple Eve Phoenix, Peregrine Phoenix is a half-sister to the Group One-winning trotter Eljaykay Phoenix.

The eve of Steve

The Duffy-trained two-year-old pacer Upright completed successive wins when beating the older pacers, while Boyington dished up a 40/1 winner in Reality Writer.

Upright, a son of Art Major was in a hectic early tussle for the lead which he won and from there defied all efforts to be run down over the 1650 m trip.

Driven by Duffy’s son Ryan, Upright was coming off a maiden win at his previous start at Shepparton on September 30.

As well as his two wins Upright also has three runner-up finishes in his eight starts.

Reality Writer, who had two years in the paddock before resuming her racing career in September, won like an odds-on chance rather than a 40/1 pop.

Driven patiently by Boyington, the four-year-old Sportswriter mare came from the tail of the field over the last lap to storm over her rivals, beating the runner-up and long odds on favourite Star Ruler by nearly 18 m in PB 1:57.9 mile rate time.

Reality Writer, who is out of the multiple winning Safely Kept mare Reality Check, has now three of her 11 starts.

Wahring horseman Daniel Jack also enjoyed a win at the meeting, partnering the Mary-Jane Mifsud-prepared Imnopumpkin to her second straight win on the track.

Amanda Turnbull had a huge night out at Echuca on Wednesday night training four winners and driving three of them to victory.

Daniel Jack also drove of Pearls For Tash to victory for Mary-Jane Mifsud.

Gunbower Harness Racing Club will not be holding its cup meeting this year, yet another victim of the coronavirus pandemic.

The meeting had been set down for Sunday, December 6.

Club secretary Peter O’Shea said that with still a big doubt on crowds being able to attend the decision had been taken out of his club’s and Harness Racing Victoria’s hands.

O’Shea said his club had been looking forward to the meeting after one of the largest crowds for years had attended last year’s cup meeting.

Gunbower, which holds two meetings a year, is now looking to its next meeting, probably in April when the time honoured $25,000 George Croxford Tribute will be the feature event.

Turnbull will produce Speak No Evil first up from a spell in the Group Three $30,000 Angelique Pace, while Potter takes on an army of Emma Stewart-trained runners with Sporty Dancer in the time-honoured Group Two $50,000 Tatlow Stakes for twoyear-old fillies.

Speak No Evil has to come from barrier six, while Sporty Dancer from barrier four in a field in which Stewart has seven runners.

Talented pacer Scorcha may not be as good as his half-brother, but he has his share of ability as again evidenced in his dashing win at Shepparton last week.

Trained by Chiltern horseman Peter Romero and driven by Chris Alford the half-brother of $2,415,738 money earner Smolda proved too slick for his rivals in 1:58.5 mile rate time, which included a blistering 55.7 last half.

A four-year-old by Courage Under Fire, Scorcha made his debut in January and was having his third run back from an eight-month spell.

His previous two starts this campaign produced second placings at Shepparton and Kilmore.

Scorcha has had eight starts for three wins and three placings.