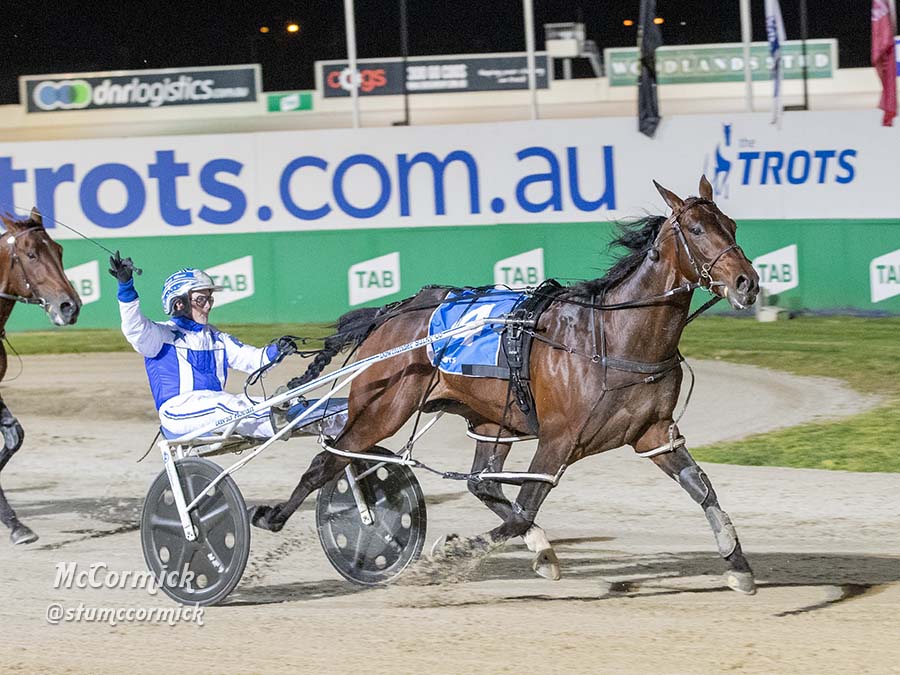 After being swamped early trainer-driver Moran stayed cool and allowed Plan B to play itself out, showing the patience and more than a little magic reminiscent of his driving hero the late Gavin Lang, who he paid tribute too immediately post-race.

“Before Gavin passed I went and saw him in hospital and he said, 'do me one favour and drive that horse yourself',” Moran told Trots Vision.

And, boy, did he. The reinsman and Lochinvar Art clawed over the top of Del-Re National A. G. Hunter Cup and Miracle Mile winner King Of Swing in the final 100 metres, saluting to the sky as he recorded a first Grand Circuit victory in a track record 1:51.4 mile rate.

Lochinvar Art now holds both the 2240-metre and 1720-metre track records at Tabcorp Park Melton, following on from January’s 4YO Bonanza win in 1:48.6.

“He’s a horse that amazes me still as a trainer,” Moran said. “His never-say-die attitude.”

It was certainly on display tonight, when Moran had to quickly abandon Plan A and any thoughts of a lead all-the-way victory.

Few speed maps would have forecast that Cross's horse Alta Orlando, driven by Mick Stanley, would spear away from the gates quickly enough to roll straight past Lochinvar Art and hem the favourite into the running line.

Worse was to come for Moran, as lead rivals Cash N Flow and King Of Swing advanced forward to the breeze and lead respectively, with Cross’s other runners Balraj and Bling It On stacked along the valued peg line.

“It didn’t turn out quite like I would have thought,” Moran said. “They burnt the gate pretty hard. When Alta Orlando got across it got a little bit tight there, which put us into a downward position where Cash N Flow and King Of Swing had the jump on us a little bit.”

Through a 42.5-second lead time and 29.5-second first quarter, team Cross had the first five runners until Moran advanced Lochinvar Art to the breeze for a season-defining final lap.

And then the script flipped again, this time by an inspired Moran move, with the reinsman realising Balraj was struggling to hold the leader’s back and swooped in when the opportunity presented.

“Just as I got to the breeze I heard Balraj touch his knee a couple of times,” Moran said. “I thought he was more than likely to lose a bit of ground on the turn, so the plan was just to try and hang off him and when he dropped away a little bit to try and spear to that position.”

And that he did, then tracking King Of Swing through a 28.6-second third quarter and into the final bend, emerging just before the straight and advancing to the outside as the chasing pack lost touch.

It became a race in two and by the 100-metre mark the Victorian nosed ahead and advanced to claim the cup by 7.1 metres, with King Of Swing a meritorious second, reigning champion Bling It On running into third and Rishi finishing fourth.

“They’ve been great mentors to me and, practically, like my second mum and dad really,” he said. “I love them to bits, they’re just great people and they couldn’t be more happy than seeing someone else get a winner.”

And he also thanked owners Kevin and Leonie Gordon for the faith they showed in him to select the horse, who has rewarded his connections with $885,376 in stakes and 21 victories from 42 starts.

“Kevin has no input whatsoever on what I buy, he just says you go and do whatever you need to do or whatever you think’s best and if it wasn’t for Kevin and Leonie we would never have got him.”

The owners parted with $29,000 on December 5, 2017, for the then two-year-old Modern Art colt out of Ponder In Paris, who caught Moran’s eye at a ready to run sale.

“He just run up good. He run up in quick time, which I wasn’t too concerned about, but it was how he did it,” Moran said.

“I think he ran his last quarter in 26 and a half or something like that as an early two-year-old, but the way he did it it looked like he ran the quarter in 31. That was pretty impressive. Just on type he looked like he had a bit of scope to go.”

And so he did, tonight capturing his fourth Group 1 victory.