BOTH HONOLUA BAY AND BETTOR BE SORRY STAY UNBEATEN, AFTER WINNING AT BALLARAT AND MELTON 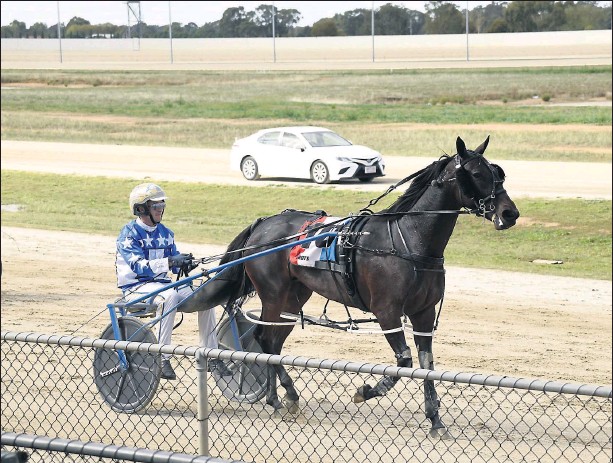 Two exciting David Aikentrained pacers remain unbeaten for the stable after wins over the past week.

Honolua Bay made it three wins from three starts when he saluted at last week’s Ballarat meeting while Bettor Be Sorry completed a hat-trick of wins at last Saturday night’s Melton meeting.

Both were reined to victory by Josh Aiken and were odds-on favourites.

After winning on debut at Bendigo on September 15 and then saluting at Shepparton a week later, Honolua Bay completed the hat-trick at Ballarat with an effortless all-the-way win.

Bettor Be Sorry made it three wins from three starts since joining the Aiken stable and made it eight wins and a second from 10 career starts when he saluted at Melton.

The five-year-old gelded son of Bettors Delight also returned a career-best 1.53.1 mile rate in his latest win, which was his seventh consecutive success.

Bettor Be Sorry had chalked up five wins and a second from seven starts for the Emma Stewart stable before joining the Aiken barn.

Driven by Josh Aiken, Bettor Be Sorry utilised his barrier three draw to take over the front-running role but had to dig deep to hold off Jamieson Steele in the drive to the wire, getting the verdict by a head.

With Castles in the sulky, consistent four-year-old Modern Art mare Cheeky Philtra notched her second career win when she led and held off all rivals.

Cheeky Philtra was having her 25th trip to the race which had previously produced a win at Shepparton on June 13 and four minor placings.

Dessie Gee was having only her second career start for trainer Damian Wilson and had raced greenly on debut on the same track on September 22 when beaten into fifth placing.

Reinswoman Laura Crossland gave the Sweet Lou twoyear-old gelding the run of the race on the pace and once into clear running in the home straight finished strongly to win comfortably.

Divine Diva completed successive wins for trainer David Aiken with her victory, her 10th career win which took her career earnings above $60,000.

Reinsman Josh Aiken enjoyed the run of the race on the back of the pacemaker and odds-on favourite Stingray Tara with Divine Diva and she got the better of that pacer right on the finishing line.

The Danny Ferris-trained and driven Yellow Stone, who cleaned up a field of pacers in his race debut at the Echuca meeting on Tuesday night, had breeding buffs scratching their heads.

Yellow Stone is by formerly Goulburn Valley-based trotting sire Yankee Spider and may well be his first pacing winner.

But he is from an unraced pacing bred mare Lombo Luvbird who has left four pacing winners, including the grand old grey mare Hollys Miss Molly, a winner of 37 races from a marathon 330 starts, and also Death Defying, a winner of 10 races.

The powerfully-built Yellow Stone had displayed his ability in trials leading into his race debut in which he simply outclassed his rivals.

Six-year-old gelding Pats Dragon continued a tradition for Amanda Turnbull when he saluted at the Echuca meeting.

Turnbull has shown a happy knack of producing former Kiwi pacers for firstup Aussie wins and Pats Dragon was no exception.

And he proved well superior to his rivals, careering away to beat the runner-up, the Tony Peacock-trained Jedda Shannon by over 22 metres in career best 1.58.3 mile rate time for the 1755 m trip.

Smart Elmore-trained pacer Brackenreid returned to the winner’s circle at Echuca with a barnstorming win.

The Keith Cotchintrained and Ryan Duffydriven five-year-old son of Western Terror had not won since April, 10 starts previously, but revelled in a fast run race to storm home along with the Cameron Maggs-trained and driven Ideal Suspect to quinella the race in impressive 1.57.9 mile rate time.

Brackenreid has been a great money-spinner for his connections and has now won 10 races with 23 minor placings from 66 starts which have reaped nearly $80,000 in prizemoney earnings.

There’s not too many trainers or drivers who consistently produce longpriced winners, but Donna Castles is one of them.

Donna prepares trotter Antiope who was driven a dashing front running drive by Doc Wilson to upstage more fancied runners at Echuca at tote odds of 18/1.

Wilson was able to fully utilise the Straphanger mare’s front row draw to keep out of trouble and run her rivals ragged to notch her seventh career win from 90 starts.

Antiope had nearly 14 metres to spare at the finishing line over fellow front marker Tiber with the 30 m backmarker Starlight Storm filling t he minor placing.

David Abrahams also struck with Lucky Chucky four-year-old Hate it when your rite who was partnered by Amanda Turnbull for her third career win in 26 starts.

Hate it when your rite’s win completed a driving double for Turnbull who also reined the Emma Stewart-trained Ideal Dan to his third win in just five career starts at the meeting.