Prized cup could be for Art

AFTER A WINNING RETURN TO RACING, TRAINER DAVID MORAN SETS HIS SIGHTS ON THE FUTURE FOR LOCHINVAR ART 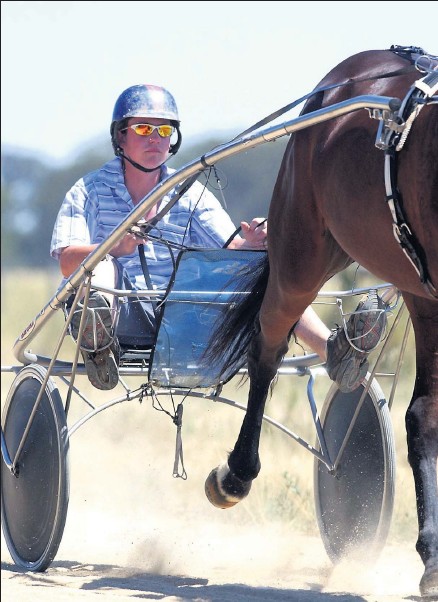 Back in the day: Chris Lang made a triumphant return to Shepparton last week.

Super Shepparton pacer Lochinvar Art is ‘spot on’ for his tilt at the $300,000 Victoria Cup next Saturday week after a successful return to metropolitan racing at Melton on Saturday night.

That’s the opinion of his trainer, driver David Moran who steered the powerful son of Art Major to an emphatic win in the $30,000 TAB Minuteman Free For All.

Moran settled Lochinvar Art near the rear of the field before making his move to outside the leader Cruz Bromac at the bell lap and then proceeded to run his rivals into the ground.

He got the better of Cruz Bromac on the home bend and then left his rivals in his wake, cruising to the finishing line with over nine metres to spare over Tam Major with Out To Play filling the minor placing.

It was Lochinvar Art’s 20th win of his 41-race career and along with his 18 minor placings took his prizemoney earnings to $714,376.

Moran is now sweating on a good draw in the Victoria Cup with Lochinvar Art who has been coming off second row draws in his last seven starts.

‘‘He’s pulled up really well from last Saturday night and it would be good if he can get a draw where he could find the lead in the Victoria Cup,’’ Moran said.

Moran had a big night at Melton, landing a plunge on former Sunraysia pacer Loorrim Lake who was backed from 50/1 at one stage into a $6 chance before easing to $9.

Loorrim Lake, a three-year-old gelding by Roll With Joe, had won five races on end in Mildura before transferring to Emma Stewart earlier this month and was having her first outing for that trainer.

The Duffys — father Steve and son Ryan — owned the early part of Wednesday’s meeting at Shepparton.

Ryan produced a driving treble and Steve a training double.

Upright in particular scored a dominant and overdue win in the two-year-old race to notch his maiden victory after three runnerup finishes in his previous six tries to break his duck.

Majic Fair, owned by veteran trots stalwart Noel Pattison, also scored a sweet win as it was only his second success in 23 tries and he was tote odds of 20/1.

Along with the early Duffy dominance it proved another fruitful meeting for northern Victorian trainers.

Stuart and Samantha Govers combined with their old warhorse Ramblenroller to notch his 14th career win and end a run of 19 starts out of the winners’ circle.

Jepsoms Pet notched up a hattrick of wins and back-to-back wins for new trainer Craig Turnbull and his reinsman daughter Abbey while Echuca horsewoman Ros Rolfe produced Beach Time for his maiden win at his eighth start.

Finley butchers Ashley Haynes and Chris Shaw got a nice cut of the action at last week’s Shepparton meeting with their trotter Peregrine Phoenix.

They bred and own the fouryear-old son of Muscle Hill who notched his first win for new trainer, driver Chris Svanosio and third career win from 12 starts.

After handing up the lead early, Peregrine Phoenix came from three back on the pegs via the sprint lane to account for Nerveracking with the Dennis Paton-trained and driven Lord Lokhi filling the minor placing.

Peregrine Phoenix, who was having only his 12th career start and his first outing for Svanosio, is a half-brother to the Group One winner Eljaykay Phoenix (by Sundon) whom Haynes and Shaw also raced.

Both Peregrine Phoenix and Eljaykay Phoenix are from only three foals left by their dam, the Malabar Maple mare Maple Eve Phoenix.

The David Aiken stable has been on fire of late.

An Aiken training treble was the highlight of last week’s Shepparton meeting and this was followed up by a double when metropolitan racing returned to Melton last Saturday night.

Two of Aiken’s Shepparton winners Honolua Bay and Letsrocknroll, both driven by Josh Aiken, were impressive in completing successive victories.

Both unleashed powerful finishing bursts which their rivals had no answer to.

Three-year-old Somebeachsomewhere gelding Honolua Bay streeted his rivals by nearly 15 metres when he won on debut at Bendigo on September 1 in 1.55.6 mile rate time. In his Shepparton win he had nearly 13 metres to spare over the runner-up at the finishing wire in 1.56.1 mile rate time.

Letsrocknroll, also having his second start for the Aiken stable after winning at his first outing on the track on September 13, repeated that win in similar style, leaving his rivals in his wake at the business end of the race.

Aiken’s other winner at Shepparton was Trouble Looming who was driven to his second career win in 15 starts by Ryan Sanderson.

At Melton the classy NSW Derby winner Malcolms Rhythm, having his second start from a long spell, posted a 1.52.9 PB mile rate over the 1720 m trip in hoisting his ninth win — there have also been 11 minor placings — in 27 career starts.

Aiken also trifected the race won by Major Delico at the Melton meeting.

Josh Aiken made the right decision in electing to drive Major Delico who was the less favoured of the Aiken trio.

Major Delico, who paid $18.30 for the win, accounted for the Ryan Sanderson-driven Blingittothemax, a $6.50 chance, and the Chris Alford-partnered Pirate Bay who was a $4.60 shot.

The Turnbulls made their mark on last week’s Shepparton meeting.

Reinswoman Abbey Turnbull and her trainer father Craig combined for a double.

Craig produced Penny Anne for her second win in nine starts since joining the stable and also had instant success with new stable addition Jemsoms Pet who had won at the previous meeting when prepared by Stanhope horseman Greg Lewis.

But Full Noise, one of the two trotters he had in the race and was tipped to win had to be content with fifth place behind his stablemate Bullion Lady.

Full Noise was a $1.90 favourite while Michael Bellman drove Bullion Lady, who paid $4 for the win.

A former Kiwi by Majestic Son, Full Noise had two of his three previous starts in Australia but after making the pace went roughly on the home turn and beat only two other runners home.

Despite the easing of COVID-19 restrictions the club has decided to pull the pin now and not proceed this year with the popular meeting, which doubles for a reunion of Elmoreites and ex-Elmoreites.

Club president Shelly Cotchin said her club was disappointed to make an early call but keeping everyone safe was the most important thing.

Dual State trainer Amanda Turnbull made it six wins from seven starts in Australia with pacer Vigoroso with his win at Bendigo this week.

The only ‘blemish’ on an otherwise perfect Australian record was at his previous start when second to the outsider Shady Dancer at Maryborough.

This week’s win was one of Vigoroso’s toughest, sitting parked for the 1650 m trip to beat Jilliby Boy and the Damina Wilson-trained and Laura Crossland-driven Cracked Pepper in 1.56.1 mile rate time