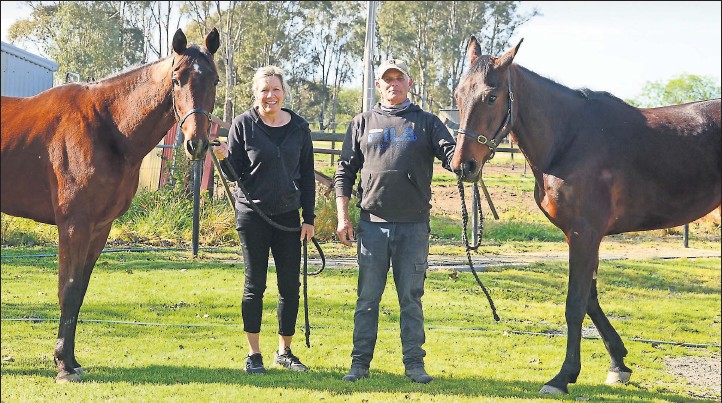 Steve Boyington — along with Frankie (left), his wife Colleen and Reality Writer — were up and about this week after snaring a double at Bendigo recently.

Shepparton horseman Steve Boyington can’t remember the last time he trained and drove a double at a meeting.

Boyington said he had been asked this question often after last week’s Bendigo meeting when he produced pacers he trains Frankie and Reality Writer for wins.

‘‘I really can’t tell you,’’ has been Boyington’s standard reply when asked when his last double was other than ‘‘it was a fair while ago’’.

After consecutive runner-up finishes at Shepparton Frankie was up to the task of chasing three wide over the final 800 m to hold out Celestia by a short half-head.

It was the three-year-old Pet Rock gelding’s third win with six placings from 17 starts.

Boyington completed the double on Reality Writer, who was also driven patiently to beat Cracked Pepper and the favourite Ace Montana.

It was a top training feat by Boyington who had not produced the four-year-old daughter of Sportswriter for more than two years.

Boyington said Reality Writer was a knee knocker and that combined with a tendon injury were the reasons why she had been off the racing scene for so long.

Reality Writer’s other win in six starts was as two-year-old when she won at Kilmore on debut in May 2018.

Trots fans may have to wait for a while yet for the much-anticipated clash between star Shepparton pacer Lochinvar Art and Ride High.

Trainer of Lochinvar Art, David Moran, resisted the temptation to make the long trip to Terang tomorrow night to take on Ride High.

Moran was never warm on making that trip and has pencilled in Bendigo tomorrow night week for Lochinvar Art’s next race.

But he doesn’t think Ride High will be in that race.

Moran time-trialled Lochinvar Art with a galloping pacemaker at last Saturday night’s Shepparton meeting and was pleased with his effort.

He bears the same moniker and has the same owner, but he is no relation to his famous stablemate Lochinvar Art.

But Lochinvar Chief again confirmed he was a talented young pacer by winning the battle for the lead — and to the finishing line — at Shepparton on Saturday night.

Punters predicted it was a twohorse race, but mainly due to the barrier draws, plumped more for the Clayton Tonkin-trained and Chris Alford-driven Idyllic ahead of David Moran’s Lochinvar Chief.

But Chief had the last laugh, winning a stirring early battle for the lead with Idyllic and then delivering again in the drive to the wire, pulling away from Idyllic to win by more than 6 m.

Moran’s other runner in the race, If its to be its up tome, driven by Amanda Turnbull, was an eyecatching third.

Lochinvar Chief’s extra smart mile rate of 1:54.7 for the 1690 mt rip also sliced 0.5 seconds off his PB which was set winning a heat of the Bathurst Gold Crown earlier this year.

By Captaintreacherous out of the unraced Always A Virgin mare Always A Target, Lochinvar Chief is building an impressive resume.

He has now won four of his seven starts with three second placings with his latest win taking his prizemoney to more than $50,000.

How good is Reactor Now?

As he progresses through his classes the answer has to be at the least pretty good.

The four-year-old son of Auckland Reactor faced his biggest test to date at Shepparton on Saturday — and came through with flying colours,

Capitalising on his barrier one draw and driven by Josh Aiken for his trainer-father David, Reactor Now was crossed early, but retook the lead almost instantly and led throughout to beat classy free-for-all performer My Kiwi Mate and the roughie Louis Sedgwick in blistering 1:52.8 mile rate time for the 1690 m trip.

This included a sizzling 55.4 last half and was only 0.3 seconds off the track set by another Aiken-trained runner, Ideal Star, earlier this year.

Talented pacer Sofala produced a career best run, time wise, to account for a talented field of rivals at Shepparton on Saturday night.

The Donna Castles-trained and driven six-year-old Safari gelding was able to get the better of the brave favourite, Western Sonador, who lost no admirers after death seating for most of the race, with Single Tree Road filling the minor placing.

The Steve O’Donoghue-Bec Bartley-trained Western Sonador was a $1.60 favourite and the reason why Sofala paid a generous $19 on the tote.

Sonny Weaver scored at Shepparton on Saturday, Sabreur saluted at Maryborough on Monday and Vigoroso won at Kilmore on Tuesday night.

A three-year-old colt by Sunshine Beach, Sonny Weaver had chalked up four minor placings from her previous five starts since joining Turnbull’s Shepparton barn from her Bathurst base.

Taking on the older pacers Sonny Weaver enjoyed the run of the race on the back of the pacesetter Santa Casa Beach and used the sprint lane to narrowly prevail over Jamieson Steele in a two-horse duel to the wire.

It was a case of welcome back to Victoria for Sonny Weaver who actually started his racing career in Victoria for Turnbull with unplaced runs at Swan Hill and Shepparton early last year.

But after that he did his racing for Turnbull in NSW, chalking up five wins in succession at one stage.

Sabreur was making his Australian debut at Maryborough and those punters who had put their faith in him at the short odds had some anxious moments before collecting due to some navigational hiccups he confronted in the run.

A four-year-old gelding by Lincoln Royal Sabreur had won two of his 27 starts in New Zealand, but had not raced since January, so it was a good training feat by the Turnbull team.

Vigoroso continued his rampant campaign winning his fifth successive race from his five Aussie starts after winning only two of his 76 outings in Kiwiland.

Nanneella trainer Col Godden, who has enjoyed a good year, produced another of his team for a win at Maryborough on Monday.

The Godden-prepared and Josh Duggan-driven Jet Black Orion put up one of the runs of the meeting to break his maiden status.

Having his eighth try to break his duck, Jet Black Orion raced at or near the end of the field, before making a sustained run three wide over the last 800 m and going on to beat Imawingate and Awesome Reactor in a tough performance.

Young trotter Sunsup got the win he was promising and deserved last week at Bendigo.

Trained by David Abrahams, the two-year-old son of Muscle Mass was sent out the $2.80 favourite in a small field and with top reinswoman Amanda Turnbull in the sulky duly delivered.

The Patrick Ryan-trained Sweet On You made the pace and was providing some serious opposition to Sunsup when the pair settled down to fight out the finish.

But when Sweet On You went roughly and broke Sunsup speared away to an easy win at the finish.

Sunsup pulled out a 58.4 last half, including a 28.7 third quarter, to demonstrate just how good talented young trotters are these days.

Resuming after a freshen-up, the Grinfromeartoear six-year-old gelding got a three-wide tow into the race after settling midfield and went on to beat the Wayne Potter-trained Roll Along Sticks and Babyitscold in 1:54.2 mile rate time for the 1650 m event.

Trained by Ros Rolfe and driven for the first time by concession reinsman Connor Ronan, Franks Very Much pulled out a 56.1 last half in notching his 12th win — there have also been 21 placings — from 76 starts.

Franks Very Much’s latest win has also taken his prizemoney to more than $91,000.

All of Franks Very Much’s wins are sentimental for his trainer as he is named in honour of Ros Rolfe’s father, the late Frank Farrell who bred and raced the pacer’s dam Cisstar, who was a talented pacing mare who won 10 races.

Goulburn Valley owners savoured wins in the past week.

Kyabram owners and breeders Peter Hall and John Lilford enjoyed a win at Menangle on Saturday night with their talented trotter Flingitandwingit.

Having his first outing since March when he was a winner on the same track, the four-year-old led throughout in 1:56.8 mile rate time in notching his eighth win.

No sale, no worries

The trotter they couldn’t sell, Rigondeux, provided Abbey Turnbull with a win when returning from a spell on Monday at Maryborough.

The Majestic Son gelding was on the market after his previous race in May, but with no takers resumed for the Maddie Ray and Hayden Gray training team at Maryborough.

Turnbull settled Rigondeux at the rear of the field and came from last at the top of the straight to nudge out the favourite Befour Bacardi and the Dennis Paton-trained and driven 154/1 shot Lord Lohki in a blanket finish.

Goulburn Valley trainers and drivers had a night out at Echuca on Wednesday night, producing six of the seven winners.

Russell Jack unveiled an impressive Some beach some here two-year old in Spring In His Step, who death seated and accounted for the Steve Duffy-trained favourite Upright in impressive time.

But Duffy had his moment later on the program when he won with Interest Me, partnered by his son Ryan.

Shellie produced promising threeyear-old filly Sultan Sass for her second win at the track within two weeks, while Cole got the chocolates with former NSW pacer Tophut Johny.

Craig Turnbull and his reinswoman daughter Abbey produced Giant Jackson for an all-the-way win, while Daryl Douglas partnered the Amanda Turnbull-trained Shoobee Doo to his 13 win and his second Victorian success from two starts in the state

More on those wins next week.