That’s one for an old mate 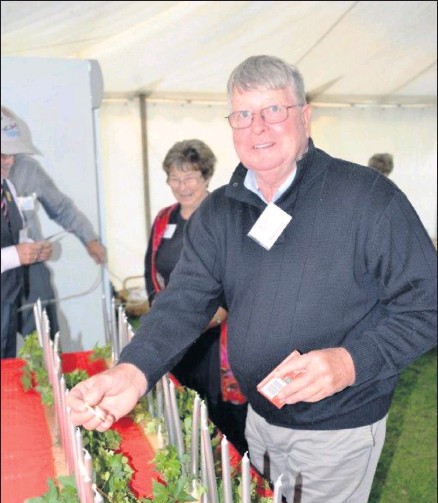 Big night: Russ Thomson won with My Mate Col, a horse named after his good friend Colin Dixon, at Shepparton on Tuesday.

Well-named My Mate Col scored a popular and sentimental win on Tuesday night at Shepparton — but not without a big scare.

A $1.30 favourite and driven by Josh Aiken, My Mate Col led, but raced roughly for a few strides about 600 m from home.

And although headed by two runners at the time he was able to regain his momentum to finish strongly along the sprint lane to account for Gigis Grinner and the Max Govers-prepared Rambleon.

Veteran Lancaster horseman Russ Thomson prepares My Mate Col who was named after his good mate, the late Colin Dixon, who was killed in a car accident several years ago.

My Mate Col was the last foal Dixon bred before his death.

Dixon was a long-time owner and friend of Thomson who trained many horses for him over the years including the star pacer Country Duke.

Dixon’s wife Merilyn owns My Mate Col, who is by Rock N Roll Heaven out of the multi-winning Safely Kept mare Nightn Georgia who has four other winners, including Soho Eros (19 wins), Rocknrolla (12 wins) and Monash (10 wins).

My Mate Col was having only his fourth trip to the races and a second placing at his previous start at Shepparton had convinced punters he was ready to win.

My Mate Col was one of two winners Aiken drove at the meeting.

He also partnered Bettor Be Sorry for his first win at his first start for his trainer-father David.

Three wins as a driver and two wins as a trainer on Sunday at Kilmore were among Amanda Turnbull’s haul over the past week.

At Kilmore Turnbull produced Didnt I and Vigoroso, pacers she trains for wins, and also won on the Emma Stewart-trained Hes Dan.

Didnt I and Vigoroso continued their stellar Victorian form with their victories.

Didnt I, a Million Dollar Cam filly has had six starts in Victoria for four wins which has taken her career victories to eight from 18 starts.

Her latest win was against the older pacers.

Vigoroso continued his unbeaten start to his Australian career, posting his fourth win from four outings since coming from New Zealand.

Continuing her hot run Turnbull also produced the talented Shoobee Doo to win at Maryborough on Monday and also partnered the Russell Jack-trained trotter Verry Cheerful to win in his Victorian debut on Tuesday night at Shepparton.

By Shoobees Place, Shoobee Doo is an all-American bred four-yearold who made it three wins out of his past four starts, two of those at Bathurst before venturing south.

A daughter of Muscles Yankee, Verry Cheerful made her Australian debut in style.

Verry Cheerful boasted four wins from 11 starts in New Zealand and confirmed she was a talented trotter with her runaway first Aussie triumph.

Another Goulburn Valley trainer to land a winner on Sunday at Kilmore was Wayne Potter who produced Better Day for back-backback to wins.

The three-year-old Betterthancheddar gelding who scored his maiden win at Shepparton at his previous and fourth race start, won effortlessly as a $1.60 favourite.

For a pacer who had been beaten an average of 26 m at his previous three starts Penitente bounced back into the winner’s circle with a vengeance last week at Echuca.

The Donna Castles-trained and driven son of Smiling Shard left his rivals in his wake in the most dominant win of the meeting.

The five-year-old was pushed forward at the start from a wide barrier draw by Castles and after taking up the front running position two laps out and proceeded to run his rivals ragged.

He cruised home with more than 20 m to spare over the runner-up Ears Ponder with the Max Goverstrained and Stuart Govers-driven Rambleon filling the minor placing.

Penitente obviously likes the Frank Ryan Raceway at Echuca as his previous win was on the track 10 starts earlier in August of last year.

Castles also partnered the 10-year-old Sharon Hahne-trained gelding Staress to victory at the meeting to take the driving honours,

The veteran pacer has now won four races this season with Castles in the sulky for all of these wins.

Major Angel had two starts in March for a third at Shepparton and a fifth at Melton when he showed he had his share of ability.

Punters got on board for his return and he was a $1.50 favourite on the tote.

And he didn’t give his supporters too many worries with a dominant front running display although a little weary at the finish.

Major Angel is out of the winning Art Major mare Mattie Angel who has also left winners Rockon Angel and Gracie Angel.

Well-travelled and talented twoyear-old pacer Lochinvar Chief hoisted his third win for the season with a dominant display at Echuca.

The son of Captaintreacherous, trained and driven by David Moran, never gave his rivals a chance in an all-the-way triumph over the 1755 m trip, carving out an impressive 1:58.8 mile rate which included a nippy 27 final half.

Lochinvar Chief has raced at Menangle. Bathurst, Shepparton and Bendigo in seven starts to date.

These outings have produced three wins and three placings, including a blistering 1:55.2 effort in winning a heat of the Gold Crown classic at Bathurst before finishing a close second in the final.

The three-year-old filly, driven from a 20 m handicap by James Herbertson, took on the older horses and proved up to the challenge in accounting for the pacemaker Gus Or Bust and the 50 m marker Daquiri.

Sultan Lass who is prepared by young horseman Wes Shellie is building an impressive resume.

The Echuca run was only the sixth time she has been to the races which have now produced three wins and two placings.

Talented pacer Allshookup made it three wins from his past five starts with a strong performance at Echuca.

Ballendella horseman Shayne Eeles set the three-year-old son of Rocknroll Dance alight with a lap to run and he revelled in the challenge to account for the Matt Newberrytrained and driven After The Chase and the Amanda Turnbull-driven Beau Steele in a tough performance.

Allshookup has had only 13 starts which have now produced four wins and two minor placings.

Nothing to sneeze at

A woman’s touch did the trick when four-year-old Shadow Play mare Cracked Pepper atoned for some bad behaviour at her previous start to return to the winners’ list in style at Echuca last week.

Driven by Damian Wilson, Cracked Pepper wasn’t on her best behaviour at her previous outing at Shepparton and finished a long last.

But Laura Crossland took the reins for the Echuca assignment and the four-year-old mare did everything right to steam home and account for the Donna Castlesdriven Sassicilian and the Rosemary Weidenbach-driven Awayallnight.

It was Cracked Pepper’s first win in 12 outings and her fourth win from 48 tries which have also produced seven minor placings.

The Crossland-Wilson team reversed roles at Tuesday’s Shepparton meeting for a win with the wellbred Iamthefirecracker.

This time Wilson was in the sulky on the Crossland-trained Betterthancheddar gelding, who finished stoutly to beat the John Newberrytrained Lombo Idle Belief and the Clive Dalton-prepared Melinka.

Iamthefirecracker is out of the top racemare Elixer whose 14 wins included the Australian Oaks.

Iamthefirecracker has now won two of her eight starts.

Sad to hear of the passing of Dr Martin Hartnett who was a great supporter of the harness racing industry.

Dr Hartnett, who lost a battle with cancer, bred and raced and some good trotters and pacers, mostly with the Illawong moniker.

Dr Hartnett had connections with the Goulburn Valley area practising as a GP at Numurkah for many years before moving to the Melbourne suburb of Noble Park about 30 years ago.

He bred and owned some top performers including the brilliant trotting mare Illawong Helios who had some epic battles with my mare Claudys Princess a few years ago.