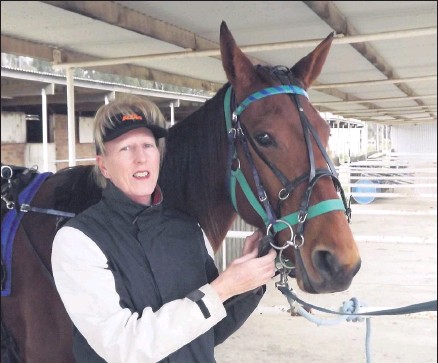 Shepparton trainer-driver David Moran is confident his stable star Lochinvar Art can come back as potent as ever despite Saturday night’s hiccup at Ballarat.

Lochinvar Art didn’t finish the race off with his usual zest and had to settle for third placing behind Major Times and My Kiwi Mate in a shock result.

The Shepparton star wasn’t driven out by Moran when he realised something was not quite right, although he had did a far bit of work to take over the front running early in the race.

Moran’s fears were realised when a vet check on Sunday morning revealed Lochinvar Art had a virus.

Moran expects Lochinvar Art to make a full recovery and should return to racing in a fortnight or so.

The pacer Lochinvar Art was to clash with tomorrow night at Shepparton, Ride High, in one of the most anticipated races for ages, is still coming.

He lines up in race two and on what he’s been doing lately his five rivals are chasing the minor money.

Amanda Turnbull has produced training and driving doubles at Echuca and Shepparton in the space of six days.

Last week at Echuca, Turnbull won with two pacers having their first start for her stable and on Tuesday at Shepparton she produced another two winners.

At Echuca four-year-old Art Major mare Be My Baby made a winning debut for Turnbull who then completed the double with another ex-Kiwi pacer Vigoroso.

Lining up for her first start for Turnbull and having her first start since February, Be My Baby utilised her favourable draw to take up the front running over the 2160 m trip and it was game over.

Be My Baby had previously had a win and five top four finishes in six starts for leading trainer Emma Stewart before joining Turnbull’s Shepparton stable.

Vigoroso, a winner of only three races from 76 starts in New Zealand, didn’t get any favours in her Aussie debut, but was still too classy for her rivals.

She had to do some work early to reach the death seat before assuming the front running and her 1:59.3 effort was a PB. On Tuesday night at Shepparton Turnbull produced To Sir With Love and Carlo Gambino for wins in the last two races on the nineevent card.

To Sir With Love completed backto-back wins on the track and a hat-trick of victories as she had won her last start in New Zealand before joining the Turnbull barn.

Mach Three six-year-old Carlo Gambino actually pulled off a hattrick of Australian wins on the Shepparton track with his victory and made it four wins on the trot as he had also won at his last start in New Zealand.

The female touch certainly came to the fore at Shepparton on Tuesday night with five of the nine winners driven by women.

Apart from Amanda Turnbull’s double Shepparton’s Laura Crossland produced Cool Rocking Daddy for his second win on the track in his past three starts and his fifth career win with a strong victory.

Hoofnote: Turnbull and Crossland also had winners on Wednesday night at Bendigo.

Turnbull completed successive Australian wins with Vigoroso who posted a 1:55.3 PB for the 1650 m trip, while Crossland produced Mamas New Dude, a 13/1 shot, for his 10th win.

Kyabram-trained trotting mare Levina secured a prizemoney milestone in claiming her sixth win when she won at Echuca on Thursday last week.

Trained and driven by Carmel Belot the six-year-old Majestic Son mare took her prizemoney earnings to more than $50,000 with the $3990 winner’s cheque.

Levina doesn’t win out of turn, but has been a consistent money earner for her trainer and her husband Bruce.

Her 78 starts have also produced 27 placings including 17 runner-up finishes.

Levina has always been a reliable trotter and her ability to capitalise on another good start from the standing start conditions and avoid early interference were keys to producing her latest win, the first in 23 starts since winning at Shepparton in June last year.

By the time the field had settled down for the 2130 m trip Levina had made up her 20 m handicap and settled third in the run.

Max to get the verdict by a short half-head at the finishing line.

Levina paid $22.10 for the win which made it all the more enjoyable for those punters who supported her.

Three of Levina’s wins have been on the Frank Ryan Paceway at Echuca, so she can obviously handle the tight circuit which can bring many trotters undone.

Driven by Maher’s partner Daniel Jack, the daughter of Art Major settled three back on the pegs over the 1755 m trip and finished hard along the sprint lane to account for the pacemaker Van Niekerk with Outside Fighter filling the minor placing.

Out of the seven times winning Bettors Delight mare Charm Alarm, La La Bron was having her fifth outing since returning to racing in June and a recent third placing at Bendigo indicated she wasn’t far off a win.

La La Bron’s previous win was in September when she completed successive wins, including the final of the Group Two Australian Pacing Gold Gold Championship, at Menangle, when top reinsman Luke McCarthy was in the sulky.

David Aiken was another Goulburn Valley-based trainer who celebrated a win when racing returned to the Frank Ryan Raceway at Echuca last week.

Aiken produced Mach Hammer for a win at his third start.

The Mach Three two-year-old had signalled his ability with placings at his first two starts at Shepparton in April and July.

Mach Hammer, a $1.60 favourite, worked straight to the front and had one of the easiest wins on the program.

The son of Somebeachsomewhere has scored three of his six wins on the track, the latest coming last week.

Driven by Josh Duggan the Jeff Gledhill-trained Fantasy Beach was eased in a one out three back sit in the run over the 2160 m trip and finished off strongly to beat the pacesetter Wotplanetrufrom in a two-horse war to the wire.

Fantasy Beach was facing the starter for the 80th time which have produced six wins and 14 placings and more than $40,400 in prizemoney.

Boy what a day

Potter produced Myboymyboy and Better Day for wins in the first two races.

Both pacers were driven by leading reinsman Chris Alford and scored in contrasting style.

Myboymyboy, a Village Jolt sixyear-old formerly trained by Corowa horseman John Lowe, was having his second start for Potter and only his 13th outing.

He did some work early to find the lead, but left his rivals standing at the business end.

On the strength of a first-up second for the Potter stable at Shepparton the previous week Myboymyboy was the $2.40 favourite.

Better Day’s win in a race for maiden three-year-olds was achieved when Alford took the initiative midrace and sent the pacer to the death seat.

Better Day surged to the front on the home turn and then held off the fast finishing Andres and Rocks Can Roll in the run to the judge.

Better Day, a son of Betterthancheddar, was having his fourth outing and with third placings at his previous two starts was a well fancied $3.20 second favourite.

Echuca-trained pacer Our Art Work hasn’t wasted any time getting on the winners’ list.

The three-year-old Artscape gelding, trained and driven by Ros Rolfe, ran his rivals ragged over the 1690 m trip at Shepparton on Tuesday night at only his second start.

He made his debut last week at Echuca when he suffered inconvenience at the start and finished sixth in the race won by La La Bron.

Rolf was able to kick up and retain the front running from a poleline draw at Shepparton with Our Art Work, who comfortably held his rivals at bay in the run to the judge.

Our Art Work is out of the In The Pocket mare Our Poppi Girl who has also left another smart pacer in Frankincence.

The win was a real family affair with the Rolf clan owning and racing the gelding who was bred by Koyuga’s Susan Wegmann.

Knows how to win

Well that’s the story of her 21 starts to date.

Aldebaran Crescent completed successive wins on the track for David Aiken and his reinsman son Josh at Shepparton on Tuesday night.

Josh drove the perfect patient race from the 20 m strand on the Majestic Son five-year-old who accounted for outsiders Bootleg Bert and Daquiri.

It was win number seven — there have been no placings — for Aldebaran Crescent with three of her past four wins being achieved on the Shepparton track since June 8.

The win was a bit more special than usual as the pacer which gave him his first win at headquarters Grinagain was a 125/1 shot.

Nick is a son of Terry Brown, a keen trainer and driver who lived at Seymour before moving west, and the grandson of Terry’s late father, Don, who was a keen harness racing man.

Seymourites Wayne and Eileen Herring are grandparents of Nick and also got a big kick out of the win.