TROTS FANS WERE SERVED UP A REAL TREAT 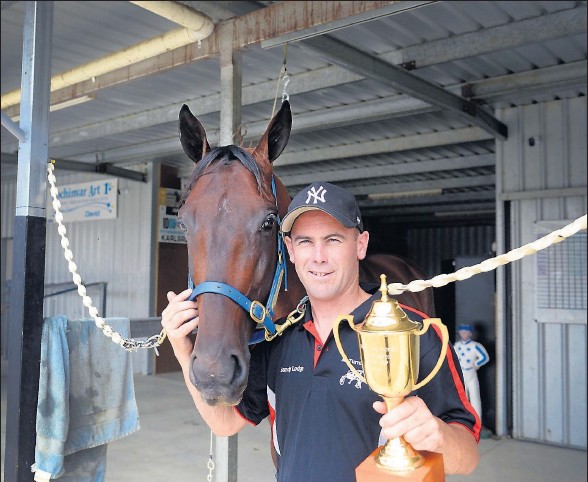 Rockstar return: Lochinvar Art was extremely impressive first up at Shepparton on Saturday for his trainer-driver David Moran.

Kialla-trained pacer Lochinvar Art and trotter Wobelee demonstrated why they carry so much hype with their winning performances.

While David Moran, trainerdriver of Lochinvar Art, declared pre-race his stable star was nowhere near fully wound up for his return to racing, sheer class again came to the fore.

Moran made his move in the 2190 m race with a lap to go when he took Lochinvar Art around the field to sit outside the pacemaker, fellow Shepparton pacer San Carlo, before running away from his rivals at the business end of the race.

Lochinvar Art won untouched by 9 m from the David Aiken-trained Sirletic with San Carlo holding down third place in his best effort in three starts since a spell.

Lochinvar Art zipped home in a blistering 55.5 last half.

‘‘He felt super. That’s the best he’s ever felt first up. He generally feels a little bit doughy first-up, but tonight he was unbelievable really,’’ Moran said after the race.

Moran said Lochinvar Art was likely to have another start next week with the upcoming Kilmore Cup and Victoria Cup on his radar.

The Alison Alford-trained trotter Wobelee also demonstrated he is in the top echelon of trotters in the land in accounting for a game McLovin in what was billed as, and turned into, a match race between the pair.

Only a five-year-old, Wobelee is building an impressive record with 23 wins and 14 placings from 39 starts which have already produced more than $405,000 in prizemoney.

Cash Lover made it five successive wins and six wins at her past seven starts in claiming a 67-79 class trot.

Cracker Jet proved too good for his older rivals in only his seventh trip to the races.

Despite taking on the older horses he was the $2.60 favourite and got the better of Whizzbang Dan and Count Bacardi in a keenly contested affair in which less than 10 m separated the first six home.

Cracker Jet, who rated a smart 2:02.2 for the 2190 m trip from the mobile, is by the French stallion Quacker Jet and is the one of only two foals out of the Angus Hall mare Win Winnie Win to race.

Ace horsewoman Kerrryn Manning doesn’t race many horses at Shepparton, but gave a reminder on Saturday that when she does punters should take note.

The Great Western-based trainerdriver, who is on the sidelines as a driver courtesy of the stewards, sent three pacers to the meeting and got the perfect result.

She won with Tinder Surprise, a $3.30 chance who was driven by her partner Grant Campbell, and also with Rupert Of Lincoln, a $3 favourite who was driven to victory by Greg Sugars.

Manning’s other starter at the meeting, Yankee Lincoln, finished runner-up to Rupert Of Lincoln to snare the quinella for the stable.

St Arnaud-trained pacer Dot The Eye was the blowout winner at Shepparton on Saturday.

The six-year-old son of Shadow Play made the long trip to the meeting worthwhile for trainer Denis McIntyre when he saluted at tote odds of 90/1.

That’s the longest priced winner at Shepparton for a long time and also the pacer’s first win for 14 starts.

Dot The Eye had run third at his previous outing to suggest he was knocking on the door for another win although most astute punters obviously thought the knock wasn’t loud enough.

Dot The Eye has paid his way for connections.

It was his sixth career win — there have also been 27 top three placings — from 67 starts which have yielded nearly $53,000 in stakemoney.

The three-year-old filly tacked on to the back of the pacesetter and favourite Wandanas Debspread and got the better of that mare near the finishing line.

By Auckland Reactor, Madam Reactor is out of the Blissfull Hall mare Madam Altissimo, a winner of seven races who has left only one other pacer to race.

Smart three-year-old trotter Venkman hoisted her fourth win when she saluted at Bendigo.

Euroa horseman Cameron Maggs took the three-year-old Wishing Stone filly straight to the front and she held out the stoutly finishing David Abrahams-trained Everysecondcounts in the run to the judge.

It was Venkman’s first win in five starts with her last win recorded at Shepparton in May.

Venkman has had 18 trips to the races which have now produced four wins and four placings.

Three-year-old Mr Feelgood gelding After The Chase opened his winning account at his fourth start when he prevailed at Wednesday night’s Shepparton meeting.

The win was even more special as he is raced and was bred by Bunbartha’s Newberry family.

The John Newberry-trained and Matt Newberry-driven pacer enjoyed the run of the race on the back of the pacesetter Wandana Debspread and was able to get into clear running in the home straight to edge out the favourite Rueslan with the Gary Pekin-trained and driven Rocks Can Roll filling the minor placing.

After The Chase didn’t make his race debut until June 23 when he signalled he had ability by running second to Beneath The Shadow at Bendigo.

In his next two runs he finished fourth and sixth at Shepparton.

After The Chase is out of the Riverboat King mare Chasing Chelsea a winner four races and is the only foal from that mare.

The wins were popular three were favourites in respective races.

The team struck early with Sugars steering the Art Major filly Momentslikethese to an impressive win in the two-year-old event to take her record to two wins from three starts.

There is certainly some good breeding with Momentslikethese.

Her dam, the unraced Presidential mare Mint Julep is the daughter of champion race and broodmare Jadah Rose who has left topline performers as all their in Guaranteed and Jadahson among five winners.

The Tubbs-Sugars combination completed the hat-trick with La Puddie and Vouchers.

Veteran horseman Geoff Martin f lew the f lag for the Shepparton trainers on Wednesday night at Shepparton when he produced Major Wish for a welcome win at big odds.

Driven by Cameron Maggs, Major Wish jumped to the front from barrier five when the mobile arms folded and was never headed over the 1690 m trip.

It was the eight-year-old Major In Art geldings first win in 39 outings with his last success recorded at Cobram this time in 2018.

Major Wish was a 26/1 shot on the tote and held off the favourite, the Justin Torney-trained Mister Joe Major, depriving that pacer’s driver Greg Sugars from driving four winners at the meeting.

Major Wish is a veteran of 145 starts which have produced only the five wins, but also 39 placings which have netted prizemoney of more than $55,000.