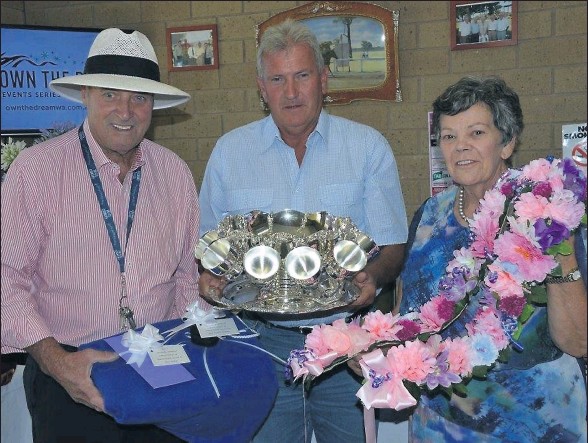 Cobram Harness Racing Club — and harness racing in general — will be forever grateful to Bob Watson.

Watson, who lost his battle with cancer last weekend at the age of 80, is credited, along with his wife Marg, with playing huge roles in getting the Cobram club back on track in challenging times several years ago.

A horse lover all his life, Watson made an immediate mark at the club and in the sport when he took over as the club’s general manager more than a decade ago, a position he held until last year.

Watson had a great and unwavering backstop in his wife Marg who understands the value of publicity for the sport and its participants.

Cobram Harness Racing Club president Charlie Ewert was full of praise for Bob’s and Marg’s dedication and contribution to the club.

‘‘Bob was a great organiser and a pleasure to work with. He had the ability to get things done and will be missed,’’ Ewert said.

The Watsons were behind the establishment of Cobram’s now famous Pink Day which has raised more than $158 000 for the McGrath Cancer Foundation over the past nine years.

One of this day’s biggest supporters, trainer-driver Donna Castles, described Watson as being a wonderful man and wonderful for the sport.

He was also behind the push to gain grants to build a four-box trainer’s facility on-course, upgrade water and power supplies and also members and drivers rooms on track.

US bound Leonidas broke the track record in another sizzling performance last Saturday night at Bendigo.

The four-year-old Mach Three gelding driven by Josh Aiken ran some blistering final sectionals to round up his rivals, comfortably beating his game stablemate Ideal Star with the Greg Norman-trained roughie Cee Cee In America filling the minor placing.

Leonidas’ mile rate of 1:51.7 for the 1650 m trip sliced 0.2 of a second off the 1:51.9 record previously held jointly by Belittled and Hashtag which were recorded earlier this year.

To get a perspective of Leonidas’ win and his current blistering form you would only have to check the results of his only two losses in his six starts since joining the barn of Avenel trainer David Aiken.

Both his seconds were behind the Shepparton-trained Lochinvar Art, one of the rising stars of Australian harness racing.

Leonidas was a smart pacer before joining the Aiken barn, winning 13 of his 32 starts for NSW trainer Blake Fitzpatrick, but seems to have gone to another level under Aiken’s training.

At this stage Leonidas will be heading for the US early next month to catch some of the late summer and autumn races in the States for his owner Steve Frinkelstein.

But plans are to give him another couple of starts in Victoria before he jets out to a new country, home and career.

Love a son of a gun

Connections of two-year-old trotter Love Gun will be satisfied if he is half as good as his dam.

Love Gun, who finished third at his second start in a race at Kilmore last week and again on Wednesday night at Bendigo, is the first foal to race from the former top trotting mare Spidergirl.

Spidergirl, who is by Yankee Spider, was a real star for the David Aiken stable a few years ago, clocking up 20 wins and 10 placings from 42 starts and more than $317 000 in prizemoney.

The Aikens were again front and centre on Monday at Shepparton.

They combined for a winning double with trotter Aldebaran Crescent and recent stable addition, pacer Blingitonhome.

Aldebaran Crescent, making her first appearance since January, was an easy winner, beating the Carmel Belot-trained and driven roughie Levina, who ran home strongly, and the Wayne Lear-trained Alderbaran Poppy.

It was the five-year-old Majestic

Blingitonhome was having his third start for the Aiken barn since crossing the Tasman where he had chalked up seven wins and five placings from 34 starts in Kiwiland.

The six-year-old son of Courage Under Fire had finished fourth at his first start for Aiken and then second — both at Shepparton — to put the writing on the wall for Monday’s runaway all-the-way win in which he accounted for the Craig Turnbull-trained Lochinvar and the Brett Bunfield-prepared Castle Retreat.

The six-year-old daughter of Mach Three, who was having her first start since December, sat on the pace and sprint laned to her sixth win, accounting for the Dave Farrar-trained Nationaldraft, who loomed as the winner in the home straight, and the Geoff Martintrained and David Moran-driven Major Wish who made a bold bid to pinch the race.

Dearest obviously loves the Shepparton track as five of her six wins have been there.

Dearest was one of three winners at the meeting for top reinsman Chris Alford who also reined Always Grinning and Interest Me to victories.

Smart pacer Interest Me returned to the winner’s circle on Monday at Shepparton for local trainer Steve Duffy.

The four-year-old daughter of Mach Three gave favourite punters a good result for the final race of the day for 52-55 class pacers over the 1690 m trip with an allthe-way win with Chris Alford in the sulky.

It was the lightly raced mare’s fourth win with three placings from 13 starts for long-time Nathalia owners and breeders Peter and Susan Ryan.

The two-year-old completed a hat-trick of wins when he saluted on Saturday night at Bendigo.

Holi Starzzz zipped over the 1650 m trip in a 1:56.1 mile rate, an equal PB established at his previous outing at Bendigo.

Trained and driven by David Miles, Holi Starzzz finished second when making his debut at Kilmore on April 24 and then won at Kilmore before his latest two wins at Bendigo.

One of the unsung heroes on Monday at Shepparton was stallion Mach Three.

The now defunct super sire produced three winners — Dearest, My Magic Merlin and Interest Me — to notch a hat-trick of siring successes in successive races to complete the eight-race program.

Smart pacer Ideal Suspect pulled off his second longshot win in three starts when he saluted on Wednesday night at Bendigo.

In a peg-hugging run for Euroa trainer-driver Cameron Maggs, Ideal Suspect finished strongly to account for Elegant Jewel and the pacemaker The Brooklyn Brawler to notch his 10th win.

Despite winning two starts previously on May 20 at Shepparton when a 38/1 shot, punters again ignored the five-year-old American Ideal gelding and he was an even juicier 45/1 chance this time.

Which didn’t go down well with most quaddie punters who were out of business in the first leg. Ideal Suspect was one of two district-trained pacers to win at the meeting.

Elmore horseman Keith Cotchin, who has been enjoying a good run of success lately, produced pacer Exciter for back-to-back wins and his seventh triumph.

Exciter, who won at Shepparton at his previous start on May 20, was driven to victory by concession reinsman Tayla French.

French was able to angle the fouryear-old son of Art Major from four back on the pegs into clear running in the home straight where he proceeded to power over his rivals.