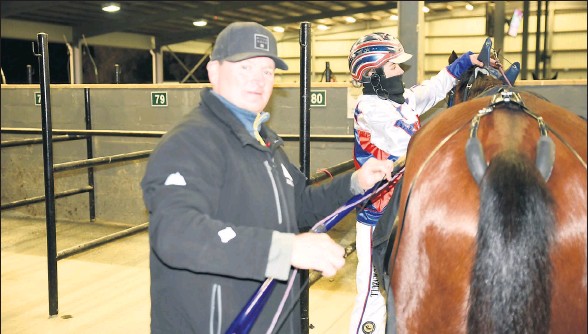 Winning ways: Craig and Abbey Turnbull combined for success with Oursouthernstar at Shepparton on Tuesday night.

David and Josh Aiken and Abbey Turnbull were the stars on Tuesday night at Shepparton with doubles.

Trained by Susan Hunter Daybreak Drama claimed a 46-50 class race over the 1690 m trip, while Divine Diva posted a PB 1:55.7 over the same trip in notching her seventh win.

Despite having not won for 15 starts Daybreak Drama was a $2.10 favourite, while the David Aikentrained Divine Diva was also the top $2.50 fancy.

Turnbull brought up her first win on Oursouthernstar, who completed successive wins on the track for new trainer, Turnbull’s father, Craig.

The win also brought up a hattrick of victories for Oursouthernstar, as he had won at Penrith before heading south to the Turnbull stables at Tatura.

Turnbull completed her driving double and David Aiken’s training double when they combined to win with Blingittothemax.

The Art Major seven-year-old notched his second win on the track in his past three starts and hoisted his 13th win when he was brought with a well timed run by Turnbull to beat Torrid Saint and the Wayne Potter-trained Roll Along Styx who was attempting a hat-trick of wins.

Three-year-old trotter From The Swamp didn’t take long to atone for a first-up loss, winning in dashing style on Tuesday night at Shepparton.

The David Moran-trained and driven three-year-old son of Quaker Jet went off stride when a hot fancy when making his race debut at Shepparton the previous week, but gave nothing a look-in this time.

After a safe getaway Moran worked From The Swamp to a front-running position where he proceeded to run his rivals ragged.

He cruised to the finishing line nearly 15 m clear of the runner-up, the David Abrahams-trained and Brent Thomson-driven Stick With Me.

From The Swamp is out of the Monarchy mare Tourmalet who only raced seven times for two wins and two placings.

The seven-year-old son of The Pres completed a hat-trick of wins when he accounted for a metropolitan class field at Bendigo last week.

With Anywhere Hugo setting a strong pace, Josh Aiken bided his time, settling Big Jack Hammer near the rear of the field.

And when he released the brakes Big Jack Hammer made some classy trotters look second rate as he breezed past them in the home stretch for a runaway win.

Coming off successive wins from backmarks at Shepparton at his previous two starts, Big Jack Hammer posted an impressive 1:57.1 mile rate over the 2150 m trip in notching his 20th win.

It was good night for the Aikens at Bendigo as they also produced talented Leonidas for his third win from five starts since joining the Aiken barn.

Shepparton-prepared pacer Hypervigilant was rewarded for some recent consistent form with a solid win on Friday night at Shepparton.

The eight-year-old Tony Barcatrained Badlands Hanover mare had run three seconds at her past four starts on the track and once she found the early lead for driver Laura Crossland was always the one to beat.

Hypervigilant just held off the strong finishing John Newberrytrained and Matt Newberry-driven A Good Knight in the run to the judge with the Jeff Gledhill-trained and Doc Wilson-driven Im Scorching filling the minor placing.

It was Hypervigilant’s fourth win in 104 starts, but she has filled a top three placing on 22 occasions.

Ruler of the universe

Having her sixth start for trainer Greg Albert and her 11th outing Tasma Flash was given the run of the race by ace reinsman Chris Alford on the back of the pacesetter Simply Heavenly and got the sprint lane run to surge to victory over that pacer.

Tasma Flash is certainly bred in the purple. His dam, the Walton Hanover mare Tasma Walton won 47 races and was placed another 57 times in 208 outings which produced more than $333 000 in prizemoney.

With five top four finishes in her seven previous starts trotter Starlight Red was well overdue for a win.

Reinswoman Laura Crossland made the front running on Starlight Red who was untroubled to hold off her rivals.

Breen, Jo in a breeze

Roll With Joe filly Louisiana Jo made it two wins from three starts when she saluted on Friday night at Shepparton.

After winning her first start on the track on May 8, Louisiana Jo lost no admirers in her second start when beaten a short half-head by the Craig Turnbull-trained Oursouthernstar.

In her latest run her Avenel trainer-driver Juanita Breen settled Louisiana Jo among the tailenders from a second row draw.

Louisiana Jo then got a lovely three-wide tow into the race over the final circuit before storming over her rivals in the home stretch with a 28.4 final sectional.

She got to the wire more than 3 m clear of the runner-up, the Steve Duffy-trained Ubetcha, with Alte filling the minor placing.

Trotter Storm Cloud, who made it five wins from his past five starts when he saluted at Shepparton on Friday, has a local link.

Storm Cloud is out of the winning Wind Cries Maori mare Cloud Chaser who has produced three winners from six foals to race, including the extra smart trotter Cruisin Around, a winner of 18 races.

Storm Cloud has had only 10 starts and won in New Zealand where he started his racing career and also at Pinjarra in Western Australia before joining the Lilley barn earlier this year.

Elmore-trained pacer Exciter was another horse overdue for a win who scored last week at Shepparton.

Trained by Keith Cotchin, the four-year-old son of Art Major had had five top four finishes including three seconds at his previous five outings going into the race, so was overdue to get the gold medal.

Exciter was driven to an all-theway victory by Tayla French in her first drive on the pacer and his 1:56.6 mile rate for the 1690 m trip was easily the quickest of the meeting.

Pacer Young Rooster made a triumphant return to racing in Victoria with a win at Shepparton last Friday night.

Trained by Amanda Turnbull, Young Rooster started his racing career in Victoria under Nathan Jack and has raced in South Australia and NSW with success for Turnbull.

Josh Aiken took the reins on Young Rooster who was last 500 m from home, but unwound a strong finishing burst three and four-wide to round up his rivals in impressive fashion.

A four-year-old son of Well Said he now boasts nine wins and 13 placings from 28 starts.

Undera horseman Glenn Freeman produced smart pacer Rockin In Memphis for his third win in his past four starts and his 10th victory on Wednesday at Kilmore.

Driven by Josh Duggan, Rockin In Memphis was able to get to the front-running position early over the 1690 m trip and held off Bye Bye Barbie in a two-horse battle to the wire.

The win was one of three victories at Kilmore savoured by Goulburn Valley trainers.

Merrigum owners Greg and Jenny Pell have enjoyed another win with their promising pacer Holi Starzzz.

The two-year-old daughter of Four Starzzz Shark saluted at Bendigo last week to make it two wins and a runner-up finish in three starts.

Five of the best

Rising star Reactor Now strung together his fifth successive win when he won in effortless fashion last week at Kilmore.

Having won at Shepparton meetings and once at Kilmore in is his previous four starts, Reactor Now was a $1.40 chance after gaining a poleline draw and leading from start to finish.

David Aiken has had the fouryear-old son of Auckland Reactor for only six starts so boasts almost a perfect record with the promising pacer.

In his only blemish for Aiken he had an excuse, breaking stride after making his debut for Aiken at Cobram in mid-February.