No getting Nutt-ed on line 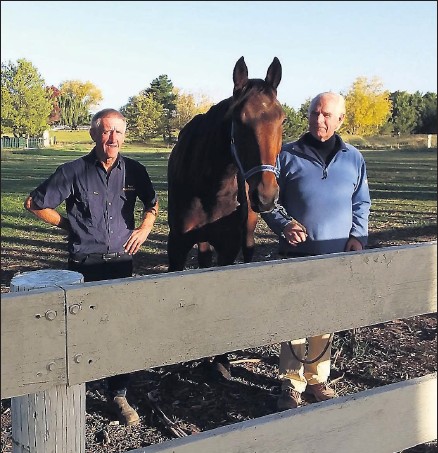 How do you celebrate your first win in 20 years in these testing times?

Royce Nutt faced that experience last Sunday at Shepparton and celebrated with a quite whisky at home in his Stanhope shed. Alone.

‘‘I’m self distancing, but I’m still very happy,’’ Nutt said with a chuckle.

Nutt’s subdued celebrations came after he had steered the Gary Merkel-trained Roslyn Gaye to victory at the nice odds of 12/1 in the last race.

It was only Nutt’s third drive on the pacer who chalked up her seventh win with the success.

And Roslyn Gaye’s slick mile rate of 1:56.4 for the1690md ash was a PB and was also easily the quickest run of the meeting.

‘‘I really thought she had a chance, so it was great. I’m pretty happy I can tell you,’’ 60-year-old Nutt said reflecting on the win.

Nutt recalled his last win in the sulky was 20 years ago when he won on the Kevin McCluskeytrained Take The Field at Cobram.

‘‘After that I had 18 years away from the game and I’ve only been mucking around again with them (horses) for the last couple of years or so,’’ he said.

‘‘Gary asked me to drive for him and it’s working out pretty well at the moment. I just hope it can continue,’’ Nutt said.

Nutt wasn’t the only Stanhope horseman to savour a win at the meeting.

Gary Pekin produced Cresco Threepeat for his fourth win for this season.

The four-year-old son of Blissfull Hall rig was able to fend off a wall of challengers in the home stretch after a daring Pekin drive.

Pekin took Cresco Threepeat to the death seat for the last lap to justify betting support for the pacer.

Ryan produced the winners of the two trotting events on the card, Dizzysjet and All The Muscles.

Josh Aiken piloted Dizzysjet to victory and Moran was aboard All The Muscles.

Both were impressive winners. Dizzysjet, a son of Quaker Jet won the three-year-old trotters race in runaway style, beating the runner-up, last start winner Venkman, by nearly 18 m with the John Newberry-trained and driven Bella Contessa filling the minor money.

All The Muscles gave a bold front running display and although getting a little weary over the concluding stages was able to hold out the Donna Castles-trained and driven Fatouche and another of the Ryan runners The Best Dream.

All The Muscles was having his first start since July, but has always been a classy performer who boasts a record of five wins from 13 starts.

Moran completed the driving double on All The Muscles having won the previous race with the tongue twister named pacer Ifitstobeitsuptome in a race for twoyear-olds.

By Rock N Roll Heaven, Ifitstobeitsuptome was having only his fifth trip to the races, but contested the recent Bathurst Gold Crown in which he ran fourth in his heat and also the consolation final.

Never write Bensonfire off as a winning chance.

He doesn’t win out of turn, but he does win as his followers found out again much to their joy at Shepparton last Sunday.

Having his 89th trip to the races he notched his seventh win for his trainer-driver Stuart Govers.

Govers positioned Bensonfire on the back of Wantalinga Dream, who set a leisurely pace, and managed to squeeze off the markers on the home bend and finish too strongly for his rivals.

The slow pace set by Wantalinga Dream was responsible for the leisurely 2:04.2 mile rate.

Reinswoman Abbey Turnbull is enjoying on a winning streak at present and enjoyed another win last Sunday at Shepparton.

Turnbull put the handle bars down at the start from a wide draw on Grinforawin, which in the washup proved a winning tactic.

Grinforawin was able to fend off all challengers in the dash to the judge, accounting for the Mark Watson-trained pair, the Damian Wilson-driven Hanover Starzzz and the David Moran-reined Miss Artemis.

A three-year-old filly by Grinfromeartoear, Grinforawin has been in the Craig Turnbull stables for just three runs and was formerly prepared in the Riverina where she had one win and two placings from seven starts.

Her dam, the Panorama mare, Wish An Order won four of limited starts and has left two other winners.

The meeting produced the talented Donna Castles-trained and driven Sofala’s return to the winners’ list, while Josh Aiken kept his record of driving a winner at every Shepparton meeting since regionalisation when he partnered the odds-on favourite Bringittothemax to his 12th win for his trainer father David.

Trainer Rosemarie Weidenbach notched her first win with Well Well, who was driven by her husband Paul, while Rochester horseman Shayne Eeles made it two wins from three starts with Mach Three mare Alta Mach.

Mark Buckingham scored with Hanover Sunshine and Laura Crossland made it two wins from five starts with Golden Sand. who was making his first appearance since August.

A group of Kyabramites who have ownership shares in the trotter Always Ready sampled another win at Melton on Anzac Day.

Always Ready, trained by Anton Golino, is now unbeaten in five runs after returning from 18 months off due to injury.

One of his Kyabram owners, Phillip Plum, said the four-year-old was still a day-to-day proposition, but the owners were thoroughly enjoying the ride at the moment.

Always Ready boasts of a record of never missing a place in his 13 starts which have produced nine wins, three seconds and a third and prizemoney earnings of more than $120 000.

Merrigum trots owners Greg and Jenny Pell are enjoying a good run with their horses at the moment.

Pacer The Panthiest completed successive wins at Kilmore on April 24 after winning there at her previous start on April 16.

A three-year-old filly by Bettors Delight, The Panthiest is now boasting the impressive record of five wins and three placings from 14 starts.

While being by a top sire, The Panthiest has strong maternal line breeding with her dam, the Art Major mare Paintball a multiple winner.

The Pells also savoured another win with Izzy Jolie at a recent Cranbourne meeting.

Echuca’s Rob Owen and former Seymourites Gary Dowling and John Wilkinson are having a good run at present with horses they have ownership interests in.

Long time breeders and owners they savoured only their second double when trotter Robbie Royale and talented pacer Sicario won on Tuesday night at Kilmore meeting.

Both are trained by Brent Lilley, who produced a quartet of winners at the meeting.

Ex-Kiwi Robbie Royal was having only his third start in Australia and it was his second win since joining the Lilley barn after seven wins in New Zealand.

Classy Sicario made it back to back wins on the track and took his record to 19 wins and 16 placings for more than $427 000 in stakemoney earnings.

An ex-Kiwi Sicario has now won four races in Australia where he has had 10 starts that have also produced three placings.

Tiza Nightmare was stepping out for the 99th time and went into the race with just one win to his credit.

That was three years ago when he won at Ballarat.

Trained by Shane Organ, Tiza Nightmare certainly made his second win a memorable one.

It was a real family affair in the equine world at a meeting at Stawell last week.

The first race on the card was won by Maori Amour, a three-yearold trotter by Majestic Son whose second dam was the top trotting mare Sumthingaboutmaori, an Inter Dominion winner who was driven to many of her wins by the late and great Gavin Lang.

Race two, also a race for trotters, was won by Gus And Maori, who in fact is a son of Sumthingaboutmaori by Angus Hall.