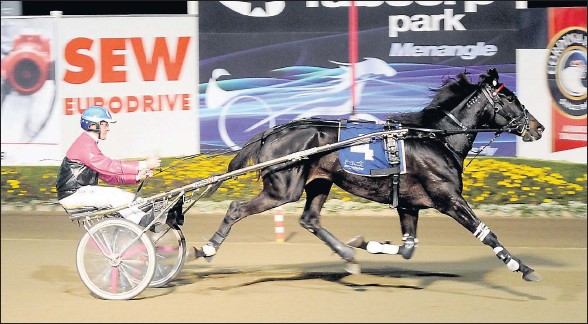 The death of champion trots driver Gavin Lang on Friday has brought back plenty of memories for Kyabram’s Gus Underwood. Underwood, who has been The News' trots writer for more than 50 years, and Josh Pell bred the top racemare Claudys Princess, who put Kyabram and the Goulburn Valley on the Australian harness racing map a few years ago when, through her racetrack deeds, she was awarded Australia’s top female trotter award for three consecutive years — as a two, three and four-year-old. Raced by the Catchya syndicate Claudys Princess was driven to 21 of her 22 wins by Lang. After some uncanny circumstances leading up to Lang’s death on Friday Underwood has written this tribute to the man they called The Iceman. A fruitful partnership: Gavin Lang aboard Claudys Princess.

I’m hoping a trotting horse bred from one of my mares does justice to his namesake.

When Gavin Lang decided to make a purchase at the yearling trotting sales two years ago he was familiar with the foal’s breeding.

It was a colt by Pegasus Spur out of the Wind Cries Maori mare All Finesse.

In fact it was a three-quarter brother to a mare called Claudys Princess, a trotter who provided so much joy for the Catchya syndicate that I’m a member of.

Five Group One wins, the Victoria-NSW Oaks double, the Vicbred Super Series finals hat-trick — as a two, three and four-year-old — the Shepparton and Kilmore trotters cups and the La Coocaracha feature at Menangle were among Claudys Princess’ wins.

What a ride it was with Princess between 2013 and 2017.And in all but one of her wins for her Kyabram trainers Mick Blackmore and Graham

Lyon, one of the greatest reinsmen this country has ever seen — Gavin Lang — was in the sulky.

In an eerie and somewhat uncanny occurrence on Friday, my better half Eva suggested we light a fire in the room in our house that we have dedicated solely to Claudys Princess and her fabulous racetrack feats.

We lit up her bulging trophy cabinet and stared in wonderment at a large picture of her utter gracefulness as she glided in full flight to one of her wins.

We thought of those magic days which we were lucky enough to experience, as owners, the magnificent deeds of a horse well above the average in ability. Maybe not a champion, but pretty close to it.

Among all this reminiscing the call came.

Son-in-law Steve Harris, a member of the Catchya syndicate, was on the phone to tell us the great Gavin Lang had just passed on.

Eva and I looked at each other in total disbelief and bewilderment.

Not such because of Gavin’s passing as we unfortunately knew it was looming after such a gallant fight.

Our disbelief was because we had not lit a fire in the Claudys Princess room for more than six months.

But for some unexplainable reason, as if being urged by some uncontrollable force, we had decided to do it that night, completely unawares that Gavin’s gallant battle was over.

We were unwittingly in the process of making an eerie, unheralded and uncanny salute you might say to the man who had added so much pleasure to our lives on the very day he was leaving us.

We are so glad now we did that. It was if it was meant to be and the timing was perfect — just like a Gavin Lang drive.

Back to that foal Gavin bought at the sales.

Gavin syndicated the foal and the Catchya syndicate has retained a few shares.

And the name the syndicate agreed on for the horse — Claudys Iceman.

Of course Gavin was called The Iceman for his nerveless, calm and kind driving skills.

Now a three-year-old The Iceman is being prepared by Ross Graham and only time will tell whether he will remotely do justice to his celebrated namesake.

But even being a quarter as good as Gavin The Great would be appropriate enough.