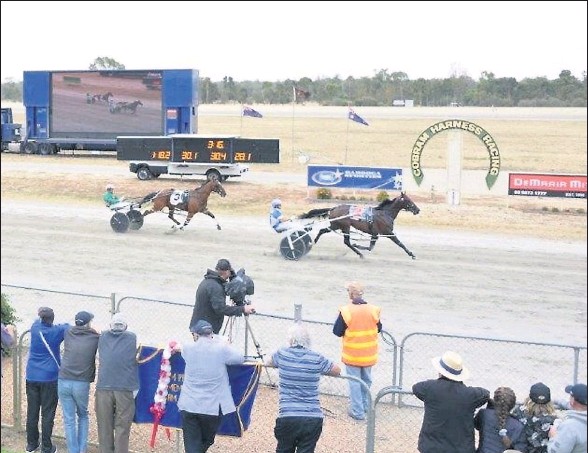 Star Shepparton pacer Lochinvar Art’s current campaign is not over yet.

The Miracle Mile runner-up is now being set for a heat and $100 000 final at the Riverina Paceway at Wagga early next month his trainer-driver David Moran said this week.

Moran floated Lochinvar Art back from Sydney on Monday and was more than happy how he had pulled up after his gallant second to the favourite King Of Swing in the Miracle Mile at Menangle on Saturday night.

Lochinvar Art picked up $150 000 for his second placing in the $1 million feature which boosted his prizemoney earnings to $655 796.

Moran said after the Wagga campaign Lochinvar Art would be given a short spell before tackling the Queensland carnival in July.

Rochester-trained Return Soldier went close to equalling the track record with an emphatic win at Wangaratta on Sunday night.

Driven by Hayden Gray the seven-year-old Bettors Delight gelding had to do some early work to take over the front running and with a 1:58.5 mile rate for the 2210 m trip was too good for his rivals.

Off the racing scene for some 18 months Return Soldier resumed racing in September and has won two races with four placings from 11 starts for his trainer Neville Pangrazio in his current campaign.

His record now stands at seven wins and eight placings from 28 starts for more than $35 000 in stakemoney earnings.

Bunbartha-trained trotter The Majestic showed there is still plenty of life in his 10-year-old legs when he hoisted his 13th win at Wangaratta.

Matt Newberry took the reins from his trainer father John and dictated terms in a front running role over the 2210 m trip on The Majestic to account for the favourite Rigondeaux and the Donna Castles-trained and driven Antiope in smart mile rate time of 2:03.1.

The old warhorse was having his 152nd trip to the races which have now produced 13 wins and 38 placings and more than $104 000 in prizemoney.

Class prevailed in the Wangaratta Trotters Cup with the hot favourite and co-back maker Maoris Law giving his rivals a spanking.

Driver Juanita Breen made the most of her first drive on the classy trotter for Seymour trainer Bill Morgan and Maoris Law arrived at the finishing line nearly 15 m clear of the runner-up, the Russell Jack trained and Josh Duggan-driven Gunning with outsider Law Legend filling the minor placing.

Maoris Law has always been a talented trotter and has now saluted 15 times with 12 placings from 41 starts.

Trainer Amanda Turnbull claimed the Wangaratta Pacing Cup with an all-the-way victory with well-travelled Think About Me.

Driven by James Herbertson, Think About Me comfortably held off the NSW visitor and former Scott Stewart trained Abit moref bliss and Brallos Pass to win his first race since saluting at Swan Hill in May.

But he was having just his sixth start since then and on the strength of some sound recent form and an ideal barrier draw he was the second favourite in the race behind his stablemate The Crimson Prince who never got into the race and finished sixth.

Think About Me had a stint in Western Australia where he won two of five starts for trainer Gary Hall Snr before returning to rejoin Turnbull’s Shepparton stable.

Pacer Sporty Ben showed his liking of the Wangaratta track with a dashing all-the-way win at the cup meeting.

Despite drawing barrier six, his Stanhope trainer-driver Gary Pekin was able to forge to the front early on Sporty Ben and then dictated terms for the rest of the race.

The four-year-old Sportswriter gelding’s only other win in 13 tries was at the previous Wangaratta meeting on January 26.

The pacer has had 13 starts which have also produced three placings.

He is out of the unraced Falcon Seelster mare Bennies Daughter, but his second dam was the extra smart mare Benelise, a winner of eight her 15 starts for Shepparton trainer Steve Boyington.

Bennies Daughter has also left another winner in Amelia Rose, who has won three of her 14 starts.

No Shadow of doubt

Casting Shadow claimed the Len Canny Memorial for 51-55 class pacers with a last-to-first performance over the 1800 mt rip.

He was driven by his regular driver Ellen Tormey.

A four-year-old gelding by Shadow Play, Casting Shadow has faced the starter 12 times for three wins and five placings.

Maggs is dining out

Has the penny dropped with talented trotter Lunch with arthur?

His Euroa trainer-driver Cameron Maggs hopes so, but is not declaring it quite yet.

After winning first up for six months at Shepparton on February 27 the five-year-old son of Majestic Son repeated the dose at Melton on Thursday last week.

Lunch with arthur was supported into a $2.80 favourite on the strength of his Shepparton win and justified the support with another f lawless display.

Maggs said the trotter had been good in his work up to this campaign and he was hoping the good manners he displayed so far are through natural maturity.

Lunch with arthur will be trying for the hat-trick tonight at Shepparton from a 20 m handicap.

Avenel trainer David Aiken had an enjoyable night on Saturday.

Apart from his star trotter Big Jack Hammer claiming a $50 000 race at Menangle for a second time, Aiken completed a hat-trick of wins in a 1200 m dash with the former Gavin Lang-trained Pirate Bay at Melton.

Pirate Bay had previously won at Cobram and Kilmore for Aiken and led throughout in 1:52.3 mile rate time to make it three in a row.

By Washington VC Pirate Bay is building an impressive record with 10 wins and 17 placings from 53 starts.

Another district-trained winner at Melt on was the Shepparton trained Shoshone Brave.

With Ryan Duffy doing the driving honours for Shepparton trainer Isabel Walsh, Shoshone Brave accounted for the Amanda Turnbull-trained Ellmers Hoofing It in a tight finish to record his eighth win in 20 starts.

There have also been seven second placings.

The Brent Lilley-trained Aldebaran Zeus has claimed the first race for two-year-old trotters race in Victoria this season.

Bred by Aldebaran Lodge Aldebaran Zeus is out of the Ouzo Boko Swedish mare Zoia Boko.

Northern Victoria trainers dished up some good winners at Bendigo last Friday with Shepparton horsewoman Laura Crossland the star with a driving double.

Cross land produced I am the fire cracker to win a this second start and also partnered the Brian Bourke-trained trotter Starlight Red to his second win in 38 tries.

I am the fire cracker is interestingly bred.

He is a four-year-old son of Betterthancheddar and is out of the former Brad Aylett-trained Classic winning mare Elixir, a winner of 14 races, including the Australian Oaks in 2009, and more than $231 000 in prizemoney.