Jack to attack in defence 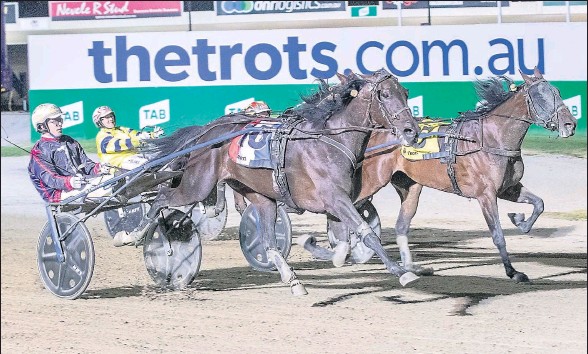 Northern Victorian trainers and drivers will be chasing Group One glory at tomorrow night’s alltrotters mega meeting at Melton.

Josh Aiken, who drove Big Jack Hammer to last year’s upset win, will be in the sulky again.

Unfortunately Big Jack Hammer’s chances haven’t been helped by an extreme back row draw in a hot field in which Aussie champ Tornado Valley is going to be the testing material after drawing barrier three off the front line.

Top reinswoman Kima Frenning will drive both trotters in the $60 000 events.

He has stable star Moonshine Linda contesting the $60 000 Lyn McPherson Breed For Speed mares final from an inside second row draw.

It’s a beach for Moran

It’s certainly all happening for Shepparton horseman David Moran at the moment.

Just three days after driving stable star Lochinvar Art to victory in the $200 000 Chariots Of Fire at Menangle, Moran struck again on the same track on Tuesday with debutant two-year-old pacer Patsbeachstorm.

There had been big raps on the Somebeachsomewhere gelding and he showed why in his debut leading throughout the 1609 m trip and accounting for his brave stablemate Lochinvar Chief in a Moran training quinella.

Patsbeachstorm, who is raced by a big syndicate of owners from the Nathalia-Numurkah area, rated 1:57.4 which included a 26.1 final quarter.

Moran is now looking at the $50 000 NSW Sapling stakes on Miracle Mile night as the next assignments for both pacers.

He is also pleased how Lochinvar Art pulled up after his gutsy Chariots Of Fire success and is now sweating on a good draw in the $1 million Miracle Mile with the star for four-year-old tomorrow night week.

The draw will take place at tomorrow night’s Menangle meeting.

The four-year-old Mcardle mare, who won her heat last week at Swan Hill, was dominant again in the final.

After sitting outside the favourite and pacemaker Headline Act for a good portion of the 1790 m trip the Mark Thompson-trained and Ellen Tormey-driven mare drew away over the concluding stages to post her fourth win in her past six starts.

Although only starting her career last August she has now saluted five times with six placings from 16 starts.

Handy pacer Fantasy Beach made sure his first win in 35 starts was one to remember.

The Jeff Gledhill-trained Somebeachsomewhere five-yearold not only saluted at Gunbower last Sunday, but recorded a PB mile rate to boot.

Competing in a 48-55 class race Fantasy Beach, driven by Josh Duggan, out-slogged Our Summer Wind to win by a head with the favourite Paddington Central filling the minor placing.

Wood on his rivals

Six-year-old Stanhope-trained trotter Bacardi Wood posted his fourth win for the season and his fifth career victory when he outtoughed his rivals in a 46-55 class trot at Gunbower.

Reinsman Gary Pekin got Bacardi Wood away well from his outside second row draw in the mobile event to work up outside the pacesetter, Antiope, and remain there until forging to the front in the home straight.

He was then able to hold off the Donna Castles-trained and driven $93 pop Antiope in a two-horse war to the wire.

Abbey Turnbull, daughter of the trainer, produced a 10-out-of-10 drive to get the money on Mangochililime.

She ushered the pacer into the one-one sit early in the race and was able to find a passage between horses near the finishing line to drive Mangochililime through and onto victory.

Craig Turnbull has had the pacer for only three starts, producing him for a first-up third at Wangaratta before winning at his next start at Echuca on February 7.

He is now the winner of eight races and has been placed 15 times in 57 starts.

Eye of the tiger

Three-year-old Freddy Taibatrained pacer Private Eye stamped himself as a promising pacer when he put up a track record-winning performance to win the $25 000 George Croxford Tribute at Gunbower.

After impressing on debut when winning at Geelong on January 22 after bungling the start, the son of Hes Watching scorched over the 2030 m trip in the Croxford Tribute to beat the pacemaker Imnopumpkin and the Greg Lewis-trained Jemsoms Pet in 1:54.6 mile rate time.

Private Eye, who was the wellsupported $3.50 favourite, had to do more than his share of work in the win, trapped three wide on a couple of occasions on the first lap and racing outside the pacemaker for the final circuit.

Private Eye has some impressive breeding with his dam Oh Eye See a winner of 11 of her 33 starts, all at Menangle, a few years ago when trained by Gavin Fitzpatrick.

It can be a big step-up from Albury to Melton, but it held no fears for the Laura Crossland-trained Mamas New Dude last Saturday night.

Driven by Damian Wilson the four-year-old Western Terror gelding vindicated his status as the $3 favourite by claiming the honours in a $10 000 four-year-old and older class race over the 2240 m trip.

Less than 10 m were between first and last in the nine-horse field with Mamas New Dude using the sprint lane to account for Millah Joy and Madazalways.

Coming off a win at Albury at his previous start Mamas New Dude’s slick mile rate of 1:55.4 over the 1720 m trip at Melton was also a PB from his eight wins and six placings from 24 starts.

Rite on the money

Trotter Hate it when your rite, who vindicated the support when opening her winning account last week at Kilmore, has some interesting breeding.

Having her first start for Tatura trainer David Abrahams, who bred the horse, and driven by Kima Frennng, the three-year-old son of Lucky Chucky put up a big run to account for Vincent Kay and the Clive Dalton-trained Nickys Son over the 2180 mt rip.

Hate it when your rite’ s dam is the Straphanger mare Adhesive, a multiple winner and her grand dam is the RCs Dee Jay mare Styx.

Hate it when your rite overcame a break shortly after the start to win at his 10th run and suggest there is more in store.

Trotting mare Barhoon made it two wins within the week when she upstaged her rivals to win a heat of the Breed For Speed Bronze Series last week at Bendigo.

Trained by Merrigum horseman Brad Aylett and driven by Bec Bartley, the daughter of Yankee Spider had opened her winning account seven days earlier on the same track at her sixth start.

Barhoon was trapped three deep in the early part of the race before getting to the death chair and then taking over the front running for the concluding stages in an impressive win in 1:58.8 time for the 1650 m trip.

Barhoon, who is the first foal from the Windcries Maori mare El Trotter, will attempt to complete a hat-trick of wins when she steps out in the Breed For Speed Bronze series final at Melton tomorrow night from a barrier four draw.