A desire to embrace Fire 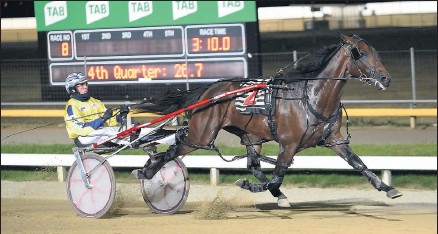 Two Goulburn Valley-trained pacers are among the key players in tomorrow night’s $200 000 Chariots Of Fire at Menangle.

Max Delight pleased his trainer with his third placing to the boom New Zealand pacer Self Assured in the lead-up Hondo Grattan Stakes at Menangle last Saturday night.

He will again be partnered by leading NSW reinsman Todd McCarthy.

Although he will start favourite, Self Assured’s task tomorrow night has been made more difficult with an extreme outside barrier draw over the 1609 m trip.

Lochinvar Art, who comes into barrier three with a scratching, already has a victory over Self Assured when he scored a track record-shattering win in the Alabar Four Year Old Bonanza at Melton on January 25 at his last start.

Lochinvar Art missed a lead-up run when last Saturday night when Melton was washed out, but Moran gave the pacer a solid hit-out to compensate and was happy with his work.

Arcadia horseman Patrick Ryan will line-up Starsbythebeach in the third heat of the NSW Oaks.

Starsbythebeach, who has drawn barrier two and will be driven by Kima Frenning, won the String Of Pearls at Albury last weekend.

Clean up at Albury

Goulburn Valley trainers and drivers cleaned up at the Albury Pacing Cup meeting last Friday night with the two feature events and a training and driving double among their haul.

Trainer Amanda Turnbull claimed the $15 300 Albury Pacing Cup with Crimson Prince, while Arcadia horseman Patrick Ryan produced the winner of the $10 200 String Of Pearls with the Kima Frenning-driven Starsbythebeach.

Leading Riverina reinsman Jackson Painting steered The Crimson Prince to an all the way in the cup, beating the David Aiken-trained and Frenning-driven Shelby Bromac, who was gallant again death seating for most of the trip.

Classy filly Starsbythebeach kicked through from a poleline barrier draw to lead throughout to claim the String Of Pearls for threeyear-old fillies.

The daughter of Somebeachsomewhere had some attackers during the run, but shrugged them all off before careering away to win by more than 37 m.

Crossland won on Rockinfeelgood who chalked up her ninth win and then buttered up in the next race to win with Mummas New Dude.

Harness Racing Victoria chief executive Dayle Brown and his team comprising John Biffra, Luke Spano and Rob Auber will be at Echuca on Wednesday night as part of an industry tour.

They will be at the Echuca Harness Racing Club’s committee room from 6.30 pm.

Everyone interested in harness racing and its future is urged to attend the evening.

‘‘It is important everyone in this industry have a say on the strategic vision of our industry and what this visit is all about,’’ Brown said.

‘‘At the conclusion of our tours of Victoria we will collate the feedback and ensure ideas are captured and considered as we develop our strategic direction for the industry.’’

The industry tour was in Shepparton on Tuesday night with about 30 people in attendance.

Shepparton horseman David Moran was the star of last week’s Cobram meeting with a driving a treble.

Moran drove Scorcha, The Best Dream and Elmers Hoofing It to wins, all for different trainers.

Scorcha, prepared by Chiltern horseman Peter Romero, created the most interest of Moran’s winners in winning a race for threeyear-olds.

He had also won on debut at Cobram on January 5.

Moran ushered the son of Courage Under Fire to outside the pacesetter Shaq early in the race and then surged to an unbeatable lead straightening for the run to the judge.

Scorcha pulled out a 56.8 last half which his rivals, including the runner-up, the $1.50 favourite Major Bob, couldn’t match.

The Patrick Ryan-trained The Best Dream also did all the work in her race against the older trotters to provide Moran with his second win.

The Best Dream sat outside the pacemaker and runner-up Aztec Inti for the entire trip and proved a little too strong in the run to the judge.

The Clive Dalton-prepared Allwoods Sunbeam caught the eye with a fast-finishing third.

Moran completed his trio of wins in the final event, winning on the Amanda Turnbull-trained Ellmers Hoofing It who led throughout to win a 66-81 class race in dashing style.

Ellmers Hoofing It had to do some early work to find the front, but was still too good for his rivals.

Moran’s winning streak in the sulky extended to Swan Hill this week when he produced Cloudlet for her maiden win.

Formerly prepared by Gavin Lang, Cloudlet, who was having her first start for Moran and her first outing since July and only fourth start, beat the Mick Blackmoretrained outsider Justa Philtra in 1:58.2 mile rate for the 1750 m trip.

Cloudlet has some strong breeding being by Art Major out of the Northern Luck mare Lombo Cloud Nine, a winner of 14 races.

Moran said Crag Turnbull deserved the praise for the win as he had done the preparatory work with the pacer and had her primed for race.

Seven-year-old Courage Under Fire gelding Bensonfire returned to something like his best form to end a lengthy losing streak last week at Cobram.

The Stuart Govers-trained and driven pacer was first home in the first event, breaking a run of 16 starts out of the winner’s circle.

Govers drove the perfect race on Bensonfire, positioning him in the one-one sit and making his winning move on the home bend to account for the pacesetter Wotplanetrufrom and Oktolove.

It was Bensonfire’s sixth win from 85 tries which have also produced 15 placings.

Hot favourite Juliaca had her followers in a sweat landing a 48-55 class race at Cobram.

The Steve O’Donoghue-Bec Bartley-trained daughter of American Ideal raced outside the leader Cracked Pepper throughout the race and looked gone on the home turn, but rallied gamely to prevail in a blanket finish.

Juliaca was having only her 13th start which have now produced three wins and two placings.

Modern Art mare Tuffanuff was certainly that when opening her winning account at Cobram at only her second start.

Tuffanuff is the only foal out of the winning Safe And Sound mare Xmas In Manhattan and her second dam is the former star pacer Silent Spring (by On The Road Again) who won 33 races and close to $1 million in prizemoney.

It was good week for Craig Turnbull who also produced Fletchas Roy to win a heat of the Vicbred Platinum Country Series at Bendigo.

A four-year-old son of Western Terror Fletchas Roy produced an impressive mile rate of 1:53.9 over the 1650 m trip to upset the oddson favourite Pradason in a thrilling finish.

Fletchas Roy’s 16 starts have produced two wins and six placings to give every indication he is a pacer with more wins in store.

Pekin drove the Blissfull Hall rig a treat, positioning him initially in the one-one and then one-outthree-back for the last 1000 m and he went on to beat the fastfinishing Laura Crossland-trained Cracked Pepper and Say A Prayer in the run to the judge.

With four top four finishes including a win in his previous four starts punters warmed to Cresco Threepeat and he started a $2.10 favourite in chalking up his third win in 23 starts for Pekin.

Trained by Bunbartha horseman Brian Bourke and driven by Ryan Duffy, Starlight Red prevailed in a blanket finish, beating two other outsiders Majestic Flash and Zoom Along Dreamer in a 30-120 class trot over the 2150 m trip.

By former smart Sundon trotter Red Samurai Starlight Red was a 17/1 shot on the tote in hoisting her maiden victory.

Living up to his name

Trotter So Awesome has been exactly that in his past two outings.

The five-year-old son of Down Under Muscles, trained by Tatura horseman David Abrahams completed successive wins when he saluted last week at Bendigo when driven by Kima Frenning.

It followed his win on the same track nine days earlier when he won in dashing style.

To underline his talent his latest win was achieved in 1:59.3.

He has had just nine starts for three wins and a placing and on his current form this is a trotter going places — fast.

He goes around again tomorrow night at Melton to attempt a hattrick of wins.

Aylett scored with the Yankee Spider four-year-old mare Barhoon who prevailed in a maiden trot over the 2150 m trip at only her sixth start.

Bec Bartley did the driving honours on Barhoon who zipped home his final half in 58.7.

She claimed her fourth win this season in a heat of the Vicbred Platinum Series at Swan Hill and in 12 starts since joining the Rochester stable of Mark Thompson, who bred the mare, has not finished further back than fourth.

Settled three back in the run by driver Ellen Tormey, Ajay Breezy Rose showed a swift turn off hoof 600 m from the judge when she zipped around the field to take the lead and then run away from her rivals down the home stretch.

She cruised home with nearly 18 m to spare over the runner-up Pirates Of Zanzibar.