MORAN TO UNLEASH BEAST AT MELTON 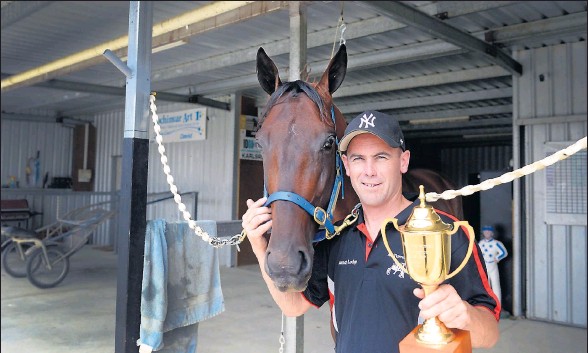 Loch in top gear: Trainer-driver David Moran is set to give Lochinvar Art a solid run at Melton tomorrow night.

Emerging Shepparton superstar pacer Lochinvar Art will have what his trainer-driver David Moran describes as a good blow out at tonight’s Melton meeting in preparation for his tilt at the Chariots Of Fire at Menangle the following weekend.

Moran is happy with the fouryear-old following his recent unplaced run in the Hunter Cup and believes he will take a lot of benefit from tonight’s hit-out before making the trip north.

Lochinvar Art has drawn barrier four in tonight’s assignment in which he’ll be a short priced favourite.

Moran expressed his intention to lead on Lochinvar Art if possible.

It’s a case of the rising star taking on the champ in tonight’s $50 000 Aldebaran Park Group One Knight Pistol at Melton.

The Kylie Sugars-trained Sammy Showdown will be shooting for his seventh win on the trot, while proven champ, the Andy Gathprepared, Tornado Valley will be trying to prove once again he is the best trotter in Australia.

Sammy Showdown has the best draw over the 2240 m trip, coming from barrier three, while Tornado Valley comes from barrier two off the second row.

There is plenty of Goulburn Valley interest in the race with Steve Duffy lining-up bonny mare Sky Petite, while David Aiken is pinning his hopes on his big race performer Big Jack Hammer, back from a brief spell after campaigning in the Inter Dominion in New Zealand late last year.

After claiming the J A Connelly Crystal Bucket with veteran trotter Father Christmas Lilley completed the big race double with the hot favourite Sicario who led all the way to claim the $35 000 Echuca Pacing Cup.

Ace reinsman Chris Alford was able to hold the front running position from barrier one with Sicario, who was a $1.10 favourite, and the race developed into a three-horse affair in the concluding stages with the winner prevailing easily at the finish.

The David Aiken-trained and Kima Frenning-driven Shelby Bromac, who spent most of the 2560 m trip outside the leader hung on bravely to finish second, just ahead of the Kyabram-trained Brallos Pass who got the run of the race on the back of Sicario.

This trio skipped clear from the rest of the field to fight out the finish over the last 300 m.

One of Sicario’s part owners, Echuca’s Rob Owen, who has been battling ill health, said it was a huge thrill to win the cup on his home track.

“I got to meet the other part owners on the night and had a great time. It’s a night I won’t forget,’’ Owen said.

Two of the part owners are former Seymourites Gary Dowling and John Wilkinson.

Reinsman Ross Payne made an early move on the Lilley-trained Father Christmas to claim the J A Connelly Crystal Bucket.

Payne sent the nine-year-old son of Love You around the field early from his co backmark of 20 m which proved the winning move.

Payne was able to dictate the terms once he had Father Christmas in front and the veteran trotter had no trouble holding off the stablemate and favourite Stress Factor and Honey Please at the business end of the challenging 2530 m trip.

The win, the 17th of his career, took Father Christmas’ prizemoney earnings close to $200 000.

Knight, 91, a brother of former top trainer the late Bob Knight and uncle of the champion reinsman the late Vin Knight, drove and raced some top pacers in his long association in the sport including Warfare, Kentucky Beauty and Itz Billy Hillis.

Wayne Potter who has been Knight’s personal trainer and carer at Avenel for the past nine years said he had been battling ill health since a knee operation 18 months ago and had spent the past six months in a Euroa nursing home.

Knight served lengthy terms as a committee member of Kilmore Racing Club of which he was a life member.

Drinks and a get-together will follow at Kilmore Trackside.

Goulburn Valley trots fans will get the chance to hear and ask questions on the state of industry when Harness Racing Victoria chief executive Dayle Brown visits Shepparton on Tuesday night as part of his Victorian Consultation Tour.

The evening at the Shepparton Harness Racing complex starts at 6.30 pm.

Given the run of the race for 46-51 class three-year-olds by Ellen Tormey on the back of the pacemaker Millwood Minx, Miss Artemis finished hard along the sprint lane to beat the favourite Pacific Rock and Jemsoms Pet to chalk up her second win from 11 starts which have also produced three placings.

A second placing at Wangaratta at her previous start had put the writing on the wall for a coming win for the daughter of top sire Art Major who is out the Bettors Delight mare Miss Athens, a multiple winner, who has left the star pacer Brallos Pass, who finished third in the Echuca Pacing Cup later in the program.

He’s Gunning for you

On his best behaviour Gunning is a talented trotter as racegoers witnessed at Echuca.

Moran set Gunning alight midrace to move around the field and take up the front running and was never in danger of being run down.

He had 7 m to spare at the finishing line over the runner-up My Calvert Rose with the local hope Majestic Time filling the minor placing.

After messing up the start when favourite at his previous run at Wangaratta and getting within 3 m of the winner at the finish punters thought Gunning was a good thing at Echuca and he was sent out a $1.70 favourite.

He has now won five of his 16 starts with five placings and could be a trotter going places.

The Turnbulls from Tatura — trainer Craig and reinswoman daughter Abbey — knocked many punters out in the first leg of the main quaddie when they scored with Mangochillilime.

Settled three back in the run by Abbey, the six-year-old son of McArdle, who was a 15/1 shot, produced a strong finish to beat the local hope Dallas Franco and the Stacey Towers-driven All Whitey Then.

Formerly prepared by Cobram horseman Linton Power Mangochillilime was having only his second start for the Turnbulls and had run third at Wangaratta in his first start for his new stable.

His latest win was his seventh success and he has also has been placed 13 times.

The other division winner was the Susan Hunter-trained and Shannon O’Sullivan-driven Monash who blew most early quaddie punters out of the water when he saluted at tote odds of 27/1.

Good on ya Cobber

Fred McKenner struck a winning blow for Echuca trainers at the Echuca Cup meeting, producing another longshot winner in Cobber Mac to wind up the nine-race card.

Mac prevailed in a busy finish with a short half-head to spare over the runner-up, the favourite Missus Matilda, with the Steve O’Donoghue-Bec Bartley-trained hope Jang Pel a close-up third.

Cobber Mac obviously loves his home track as his only other win came on the Frank Ryan Raceway in June.

A lightly raced seven-year-old gelding by Gotta Go Collect, who didn’t debut until a five-year-old, Cobber Mac registered a PB 1:59.9 mile rate in the win which came at his 20th start.

Talented mare Tan going with sierra made a triumphant return to the track at Echuca.

A winner of six races and only out of the top three placings twice in 18 starts going into the race the classy four-year-old Sportswriter mare was stepping out for the first time since April in a heat of the Alabar Vicbred Platinum Mares Sprint Championship.

From barrier two reinsman Craig Hoban was able to take up the front running at barrier rise on Tan going with sierra and dictate terms.

With a 27.4 last quarter she pulled away in the concluding stages to beat the Mark Thompson-trained and Ellen Tormey-driven Ajay Breezy Rose and the Ruth Arthur prepared Wild Imagination in a 1:59.2 mile rate over the 1755m trip.

The win lifted Tan going with sierra, who ran second in the NSW Oaks last season to more than $164 000 in prizemoney earnings.