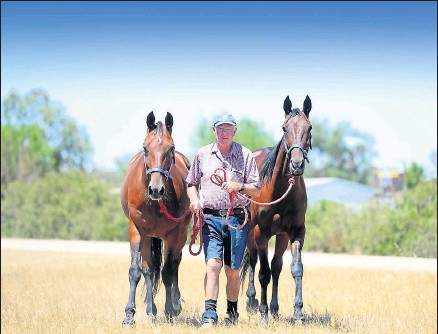 At the double: Shepparton trainer Dave Farrar with his winning Albury double, Hayjoshandco and National Draft, who were part of reinsman Damien Wilson’s five winners at the meeting.

Wilson trained two of the winners, Feeling The Love and Winkn Nod, who were favourites, and also scored a driving double for Shepparton trainer Dave Farrar on Hayjoshandco ($5.50) and National Draft ($3.30).

Wilson brought up his high five with a win on Our Summer Bay for Kaarimba horseman Darryl Hill.

Wilson said it was his most successful meeting in the sulky.

‘‘I’m pretty sure I drove four winners, also at a New Year’s Eve Albury meeting some years ago, but have never driven five at a meeting before,’’ the experienced horseman said.

Wilson approached the meeting expecting he would drive at least two winners.

‘‘I was pretty confident about my chances with my two and thought the other three all had a chance,’’ he said.

‘‘But I didn’t expect it would quite end up like it did, but it was good.’’

Wilson certainly has had an enjoyable festive time.

He also had a winner at the previous Albury meeting and also at the Christmas Eve Shepparton meeting.

At Albury on December 20, Wilson completed successive wins with a pacer he trains, Cobie Hall.

Cobie Hall, who had won his first race for 25 starts when he saluted at Echuca on December 12, put up another impressive run, dodging early breakers and finding the front inside two laps out and then defying all efforts to be run down.

At Shepparton, Wilson produced the Brian King-bred trotter Kalarney Heidi for her first win at her ninth start.

But with five minor placings in her previous eight starts leading into the Shepparton race the fiveyear-old daughter of Bad Boy Truscott, who is owned by Peter Cordy, had been knocking loudly on the door for a coming win.

Big guns out to play

The Steve O’Donoghue-Bec Bartley-trained San Carlo has drawn barrier eight, while the David Aiken-trained Wrappers Delight comes from gate 11 in the 2650 m marathon.

San Carlo will be making his first appearance since his New Zealand Inter Dominion campaign when he made the final for the third successive year.

The exciting The Storm Inside will start favourite from barrier five for trainer Emma Stewart and ace reinsman Chris Alford.

In the other big feature on the card, the $50 000 Aldebaran Park Maori Mile, tiny Steve Duffytrained and Ryan Duffy-driven mare Sky Petite didn’t fare well in the draw, coming up with the outside front row gate in a hot field.

Mach Three mare Divine Diva made it three wins from her past four starts when she led her rivals a merry dance in a 52-64 class mares race at Melton last Saturday night.

Trained by David Aiken and driven by his son Josh, Divine Diva found the front from a wide draw after 400 m and pulled away from her rivals in the home stretch for an easy win.

Divine Diva had won successive starts at Kilmore and Shepparton before running third at Bendigo at her previous outing to a rising star — Our Millionaire — who won earlier in the night at Melton.

Four-year-old Bettors Delight mare Juniper vindicated the support of punters with an impressive win in a 30-50 class pacers race.

It was the first Victorian start for Juniper who won two races in Tasmania from 18 starts.

Shannon O’Sullivan drove the pacer to a short half-head win over the favourite, the Laura Crossland-trained and driven Celerina in a two-horse war to the wire.

The Rochester-trained pacer Dunrobbin filled the minor placing more than 10 m away.

While winless in his previous 25 starts there was money to say Fourstarzzzspecial would run a bold race and he firmed into a $3.50 second favourite after drawing barrier two.

The Elmore IGA Trotters Cup was won by the 40 m co-back marker Scottish Sardius who won the race with a quick getaway and led for the last two laps for Inglewood trainerdriver Peter Sanderson.

After driving The Diamond King to victory at big odds for her brother Kevin Jr at Kilmore leading up to Christmas, Olivia delivered a similar dose of longshot joy, this time for her trainer-mother, Rosie, at Elmore.

This time it was the 11-year-old pacer Stuart, trained by Rosie, who scored the win at nice odds.

Driven straight to the front from barrier five at the start Stuart proceeded to run his rivals ragged for the remainder of the 2180 m trip, beating the runner-up Mister Parmesan by nearly 10 m.

It was Stuart’s first win for two years; his previous win at Elmore in 2017.

Stuart, a veteran of 130 starts, ran second in the final at Echuca on Wednesday night with Olivia in the sulky.

Joe is not slow

A brief freshen up has worked wonders for smart pacer Mister Joe Major.

A late starter to his racing career Mister Joe Major was stepping out for the first time since early October on Christmas Eve at Shepparton where he scored a pillar-to-post win for Undera trainer Justin Torney and reinsman Greg Sugars.

Sugars was able to dictate a slow pace in his front running role and Mister Joe Major held off Vuitton and the Echuca-trained Lagom in the run to the finishing post with a slick final quarter.

It was the talented pacer’s fourth win from 16 starts, all of which were last year as a seven and eightyear-old.

When he proved too good for his rivals on Christmas Eve at Shepparton he hoisted his sixth win from 19 starts.

He had won at Gunbower two starts earlier and four of his wins have been under Crossland’s mentoring.

Prior to joining the Crossland barn the four-year-old son of Western Terror had won two races from five starts for leading trainer Emma Stewart.

Crossland is confident Mamas New Dude will one day measure up to metropolitan class.

‘‘He keeps improving and I really like him,’’ she said.

A trip back to a familiar stomping ground at Leeton finished in two early Christmas presents for two Goulburn Valley horsemen on Christmas Eve.

Im Delightful had his head out on the line to score his third win, while Salvator Mundi scored an emphatic all-the-way triumph.

Im Delightful completed the heat-final double at the New Year’s night meeting with an all-the-way win in the $15 000 final in which Salvator Mundi finished a fast closing third.

Ros Rolfe flew the flag for EchucaMoama, overcoming some setbacks to win with five-year-old Sportswriter gelding Dallas Franco, a pacer she trains and drives.

Rochester horseman Mark Thompson was also a winner, producing the consistent and lightlyraced Ajay Breezy Rose, driven by Nigel Milne, for a barnstorming win in one of the features, the Frank and Carmel Ryan Memorial for 51-54 class pacers.

Shepparton trainer Russell Jack also saw in the New Year with a win, producing Shez All Style to win the three-year-old event on the card at her seventh trip to the races.

Shelbourne trainer Kate Hargreaves had a big night, producing the first winners on the seven-event program Beyond A Shadow and the trotter Beau Garcon who were driven to victory by Alex Ashwood.

A big crowd again attended the meeting, traditionally the club’s biggest for the year in terms of spectators.

In is now preparing for next meeting, its cup meeting, early next month.

Leading Tasmania trainer Ben Yole, who recently campaigned a team in Victoria, was certainly well represented at the non TAB meeting at St Mary’s on the Apple Isle on New Year’s Day.

Yole provided half the runners — 31 all told — on the seven-event program.

In one race he had seven of the nine runners and in another six of the seven runners.

His haul was four winners and numerous placings.

The tour, that started last month, will have Brown visit all harness regions in the state to garner views relating to the strategic vision of the sport in Victoria.

More dates will be released in coming days once confirmation is received from those clubs.

Below is a list of confirmed sessions with everyone welcome to attend: