Flat Carlo set to buck up 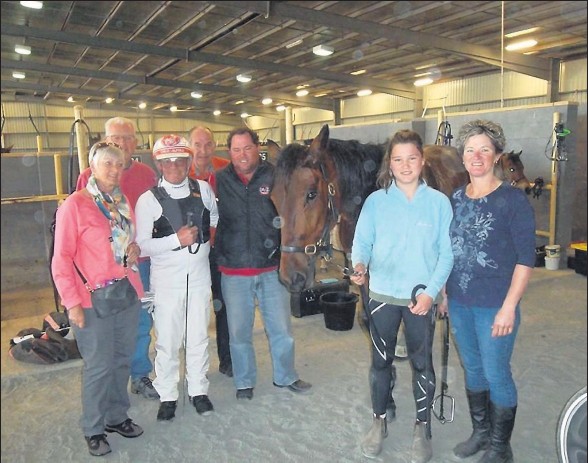 O’Donoghue is not sure why the eight- year-old performed below expectations, but said his stable star was back on track to contest the first round Inter Dominion heats in Auckland tonight week.

‘‘He flew to Auckland on Monday, but had a hit-out before he left at Mark Purdon’s place in Christchurch and we were very happy with him,’’ O’Donoghue said.

‘‘I’m not sure why he was f lat in the New Zealand Cup, but it could have been a change in diet; it’s so lush over there. I knew he was in trouble when he was left in the breeze (outside the leader) and wasn’t pulling. In those situations he normally gets pulling a bit, so I knew something was wrong then.

‘‘But at the moment everything seems good again.’’

O’Donoghue said he was blown away by the build-up to the New Zealand Trotting Cup and the day itself and how well it was embraced by the public.

‘‘It was unbelievable and a step up from any other harness race I’ve been too,’’ he said.

Meanwhile another of O’Donoghue’s and Bec Bartley’s stable Holstein was the centre of attraction at last night’s Echuca meeting.

A well-named pacer called Holstein made his debut for the stable.

He is a skewbald — bay with white patches — which is a rare colour these days in harness racing.

O’Donoghue predicted he would be no San Carlo, but had the ability to win a few races.

Breen spurs her on

Driven by Breen, Golden Spurs claimed the honours in a 52-61 class trot as a $3.40 favourite, so it was a popular win with punters.

Breen has now won four races in 12 starts since taking over the training of the six-year-old daughter of Pegasus Spur who has six wins in her 27 starts.

Talented, but injury-prone, trotter Custodian demonstrated why he has won 10 of his 21 starts last week at Kilmore.

After standing f lat-footed at his previous start at Shepparton and not participating in the race at his second outing in this campaign, the six-year-old son of Muscle Mass appreciated the mobile conditions at Kilmore and was never going to lose after taking up the front running shortly after the start.

David Moran did the driving honours for trainer Amanda Turnbull.

Custodian will start a short priced from a poleline draw at Melton tonight.

One pacer was going to open his winning account at Shepparton last Sunday and it was the Danny Thackeray-trained Western Crisis.

Winless in his previous 15 starts, the four-year-old Western Ideal gelding lined up in a race for non winners and vindicated the support of punters to get the verdict by a short half-head from the well fancied second favourite Heeza little caesar.

Western Crisis had shown ability in his previous 15 outings, which included a second and three thirds.

The Chris Alford driving factor no doubt further warmed punters to say he could break his duck.

Punters who supported the favourite Our Quick Cash in the trotters race at Shepparton last Sunday experienced the feelings of ecstasy and disappointment all within a moment.

The question was how far Our Quick Cash was going to win by when he surged to the front on the home bend and established an unbeatable lead.

That unbeatable lead though disappeared when Our Quick Cash went off stride, allowing the runners he had just rounded up on the home bend Ima Ziabee and Starlight Storm to surge to the front again with Ima Ziabee prevailing.

It’s happened many times before, particularly in trotting races, and it will happen again.

And, as they say, that’s racing.

in the New Zealand Trotters Cup the previous Tuesday Steve O’Donoghue returned home to witness another of his and Bec Bartley’s team win on his home track last Sunday.

Juliaca was having only her 10th trip to the races and previously had a win and two minor placings to her credit.

It is obvious Juliaca, who is by American Ideal out of the winning Christian Cullen mare Perfect Diva likes the Shepparton track as her other win was on the circuit on August 28.

Benalla-trained pacer Just call me chief is another pacer who loves the Shepparton track.

Four of his five wins have been on the circuit, the latest at last Sunday’s meeting.

It was his first win since saluting on the track four starts previously on September 28.

And three of Just call me chief’s previous four wins were also achieved on the Shepparton circuit with the other win achieved at Albury.

The son of Rock N Roll Heaven, trained by veteran horseman Russ Thomson and driven by Damian Wilson, produced a slick 1:54.1 mile rate in registering his fifth win in 27 starts that have included 12 placings.

Frenning partnered the Ian Dornauf-trained Royal Obsession for an impressive win, also in career best mile rate time of 1:54.3 for the 1650 m trip.

The sudden death of Shepparton’s Warren Newbound has rocked the harness racing community.

His funeral was held in Shepparton last Monday and attracted a massive crowd of mourners from across Australia which was testament to his popularity and the many friends and acquaintances he made in his 57 years on this planet.

A member of the stalwart Newbound

harness racing clan of Forest Lodge fame, Warren was a master farrier who also dabbled in breeding and ownership of harness horses.

He was known for his sense of humour and a love for pulling pranks on unsuspecting friends.

He is survived by his wife Kathy and four children.

Elmore trainer Keith Cotchin has the underrated Brackenreid drawn the best of the trio in barrier three over the 1720 m trip.

Amanda Turnbull lines up Elmers Hoofing It, to be driven by David Moran, who has a second row draw, while Avenel horseman David Aiken will be represented by Blingittothemax, who will be driven by James Herbertson and will come from barrier five.

Aiken is also chasing the $60 000 Geelong Pacing Cup tomorrow night with Raptors Flight who is drawn to run a big race from barrier two with Josh Aiken in the sulky.