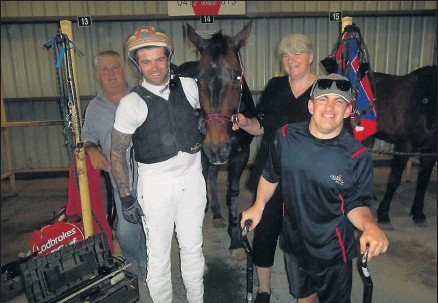 No loss for Karlos: The happy team of Keith Cotchin, Ryan Duffy, Shelly Cotchin and team Cotchin’s number one fan Brett after Karlos’ win at Shepparton on Tuesday night.

Aldebaran Park took the Three Year Old Trotting Sire of the Year with stallion Skyvalley and was also the breeder of Jaspervellabeach a winner in the Two Year Old Colts and Geldings Pacing Horse of the Year age group.

Lauriston Bloodstock produced the Broodmare of the Year in Aston Villa, while one its pacers, Poster Boy, was a Horse of the Year winner in his category.

Benstud operators, the Judd family, took the Ian Daff award for their service and contribution to the breeding industry.

Jack prepares the Two Year Old Trotter of the Year winner Jaxnme, while Crossland puts the polish on Lochinvar Art a winner of his section.

? Ian Daff Memorial for tenured service and contribution to the Victorian breeding industry: The Judd family.

? Ultimate Machete @ Alabar 2YO Sire of the Year: Some beach somewhere( Empire Stallions).

Local longshot winners were to the fore on Wednesday night at Shepparton.

Ardmona horsewoman Donna Castles has made a habit over the years of landing a generously priced winner and she did it again to kick off the eight-race program.

Castles partnered pacer Staress to win at 35/1 to win the opening event for Wangaratta trainer Sharon Hahne, breaking a 40-race drought without a win for the 10-year-old.

Kyabram trainer Mark Watson also enjoyed a win at nice odds with Some Change who was a 22/1 shot on the tote.

Other winners with local connections, but more fancied by punters included Revolt who won his fifth race in six weeks and six starts on the track for Shepparton trainer Isabel Walsh.

Elmore trainer Keith Cotchin also had a winner with the Ryan Duffydriven Karlos, who started favourite, while former locals, trainer Robert Caton and reinswoman Tiana McMahon, now based in South Australia, were in the winner’s circle with Lets Go There.

It’s been a huge week in the sulky for Nagambie horsewoman Kima Frenning.

Frenning started her winning spree with a double at Kilmore on Thursday night of last week and followed up with trebles at Geelong and Melton in the next two nights.

At Kilmore, Frenning saluted on the David Aiken-trained Bringittothemax and the Emma Stewart-trained Go In Style.

Bringittothemax, who was having his first start for the stable had won at his previous two starts — the last on September 25 — at Launceston for Tassie trainer Paul Ashwood before crossing the Tasman and boasting a record of nine wins from 46 starts on his arrival in Victoria.

Frenning revved Bringittothemax up from a wide front row draw early to take up the front running in the 1690 m event and he ran away from his rivals at the business end.

After suffering his first loss after seven previous Australian wins since joining the Aiken barn, former Kiwi Raptors Flight didn’t take long to atone and was one of Frenning’s three winners at Melton.

Funk to a narrow win in a claimers event and after Raptors Flight’s win via a sprint lane run completed the treble with another Aiken winner, Emerging Talent.

Frenning’s hot run continued at Melton on Tuesday night when she won on the Aiken-trained Roll With It, who had signalled a return to form with a fourth placing at Melton last Saturday night.

Six-year-old Village Jasper pacer Tiwanaku scored his first Victorian win on Tuesday night at Melton and anyone who risked a few bob on him would have been beaming after the race.

Driven by Jack Laugher, Tiwanaku finished all over his rivals to claim his 12th win in 94 starts.

He was having his 13th Victorian start since returning to the mainland from Tasmania where he was a member of the Ben Yole barn near Launceston.

He is one of the 16 pacers who made then trip across for Yole to prepared by his brother Tim at Wahring.

Talented Avenel-trained trotter Golden Spurs hasn’t taken long to get back in the winner’s circle after a lengthy spell.

Having only her second start since April the Juanita Breen-prepared and driven daughter of Pegasus Spur was able to get the better of Flash Kyvalley last week at Kilmore to hoist her fifth win from 24 starts.

Formerly prepared by Seymour horseman Bill Morgan, Breen has produced Golden Spurs for three of these wins from nine starts.

Shepparton-trained pacer Spring Delight made it three wins from six starts when he prevailed in a heat of a 51-54 class race last week at Kilmore.

Prepared by Steve Duffy and driven by his son Ryan the well bred four-year-old proved too strong for the Ian Dornauf-trained Royal Obsession and Leah Miller.

Two of Spring Delight’s previous wins were recorded at Swan Hill including a win on debut in early July.

In his latest win Ryan Duffy took Spring Delight to the front with 1200 m to go which proved a winning move in the race over the 1690 m sprint trip.

Trainer Steve Duffy describes Spring Delight, who is by top sire Bettors Delight, as a nice progressive horse who continues to improve at each prep.

Owner Jim Connolly made the decision to retire the 12-year-old gelding after his fourth placing behind Tornado Valley, beaten less than 10 m, at Melton on October 5.

‘‘He has been pulling up a bit sore in his recent starts, so we have decided to retire him, he’s been a great horse for us,’’ Connolly, who has his breeding farm at Kyvalley, said.

Connolly was naturally hoping he had made a good choice when he bought the all-American bred Kyvalley Blur (by Chocolatier out of Duo Val Car) at an American yearling sale in 2009.

With his 136 starts producing 30 wins and 53 placings and stake earnings of $611 787 Kyvalley Blur has repaid Connolly’s faith in his purchase in full and quite a bit more.

Connolly will repay the old champ with a life of retirement at his Kyvalley property where he will have another of his former star performers Kyvalley Road as company.

Class on show in cup

While there is just a disappointing field of five, tonight’s $35 000 Swan Hill Pacing Cup has some genuine drawcards.

The ‘‘Shepparton Slayer’’ San Carlo and the brilliant Queenslandtrained pacer Colt Thirty One are the headline acts in the race which has another capable performer Tam Major also lining up.

San Carlo, who is having his final hit-out before his New Zealand campaign, looks hard to beat, but Colt Thirty One is also a class act and will have plenty of admirers.

The news at Dr Kath McIntosh’s Kyabram-based Northern Rivers Equine Veterinary Clinic has all been positive in recent weeks.

One of its stallions, the Rocknroll Hanover horse Yankee Rockstar, who is standing his second season at stud, received a terrific boost to his stocks from the 2018-19 Harness Racing Australia and Harness Breeders Victoria awards.

Yankee Rockstar’s dam, Aston Villa USA, was named the Australian and Victorian Pacing Broodmare of the Year for the 2018-19 season. while his halfbrother Poster Boy received the Aged Pacing Entire-Gelding of the Year award.

Yankee Rockstar’s first Victorianbred foals are starting to hit the ground and are really looking the part.

World champion American import stallion Mel Mara arrived in great condition and has settled in well to his new environment at Northern Rivers.

The millionaire dollar earner has received nearly 50 bookings already from all states and New Zealand.

Possessed with blinding speed, Mel Mara paced two winning miles inside 1:48 and was race-timed in faster than 1:48 on five occasions.

Another of the Northern Rivers stallions, American Ideal, who is standing his first season at Northern Rivers Equine, justified his status as one of the world’s premier sires with feature race winners in three different countries last month.

Bling It On, the richest and fastest Australian-born progeny of American Ideal, made a triumphant return to the racetrack with a careerbest 1:50.2 effort in a Group Three at Menangle and a track recordbreaking win in the Group One $250 000 Victoria Cup at Melton.

Brilliant three-year-old Soho Hamilton, who streeted his rivals in the Group Two $50 000 Vicbred Home Grown Classic at Melton, the four-year-old Bletchley Park, a runaway winner of a Group Three at Gloucester Park, and Cruz, who downed a top field in the Preux Chevalier Free-for-all at Melton, were other recent feature winners sired by American Ideal.

American Ideal is also currently third on the American All Aged sire list, fourth on the two-year-old list and fifth in the three-year-old premiership.

His stock has earned $US13 million to date this year.