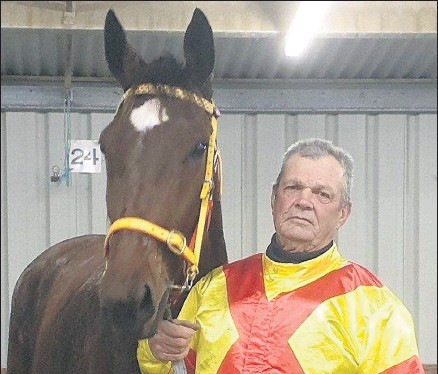 Big bucks: Congupna trainer Danny Ferris with his longshot specialist Dayseedee who saluted at odds of 78/1 at Shepparton.

Longshot winners have been on the trots menu during the past week or so and northern Victorian trainers have been among those to savour success with horses generally unwanted by punters.

Last week at Shepparton two district-trained pacers blew punters out of the water to kick off the program.

Cobram horseman Linton Power produced pacer Mangochililime to win a 52-55 class race to open the program at odds of 63/1.

Driven by Shannon O’Sullivan it was the McArdle gelding’s fifth win.

Then it was Congupna trainer Danny Ferris’ turn to rock punters in the following race, also for 52-55 class pacers.

He drove longshot specialist Dayseedee, a pacer he owns with his wife Dianne, trains and drives to her fourth win — at tote odds of 78/1.

In two of her three other wins Dayseedee also won at cricket score odds.

At her second win at Cobram in January she paid $54 and in her third win at Echuca in June she was again a $54 shot.

In her maiden win in March last year at Bendigo punters didn’t get quite the value of the other wins when she returned a dividend of $5.80.

Ferris was asked to please explain by stewards after her win last week following a tongue in cheek interview with Rod Booker when he quipped ‘‘we love winning at big odds’’.

‘‘I don’t even bet, so that conversation didn’t last long, but it was a great win for my wife, Dianne, who is battling cancer and those punters who took the big odds and rang to congratulate me,’’ Ferris said.

But Ferris is contemplating selling Dayseedee due to the new race program structures.

“She was racing against four pacers at Shepparton who had won in excess of $100 000, so she did a big job to win, particularly when sitting in the death seat, but that’s what she has to do under the present system. So I might have to move her on to where she can compete against similar class horses,’’ Ferris said.

The longshots winning spree continued at last week’s maiden day at Maryborough when leading trainer David Aiken drove the longest priced winner of his career in the sulky when he saluted on two-year-old filly Secret Identity.

The A Rocknroll Dance filly paid a whopping $85.40.

The filly was having only her fifth attempt to break her maiden status and in winning she beat the Russell Jack-trained Techys Angel and the Matthew Higgins-prepared Minika in a district trifecta.

Popular Ardmona horsewoman Donna Castles also bobbed up with a roughie at the meeting.

She won a three-year-old trotters race with Dances, who was a 30/1 shot on the tote.

Castles has made a habit of driving long priced winners in her career and Dances, a Bacardi Lindy filly, who was bred by Ken and Jan Wills, was having only her third trip to the races.

Top trainer and driver combination David Aiken and Kima Frenning started the new season as they left the previous season — with a winner.

On the second last day of the old season last Saturday night at Melton the pair combined to claim the My Lightning Blue Free-For-All feature with Wrappers Delight who ran stunning time in claiming his 18th win in 51 starts.

Aiken and Frenning struck again at Yarra Valley on Monday, the second day of the new racing season, with Tidal Surge.

The Mach Three four-year-old hasn’t won out of turn and it was only his third win from 33 tries, but he has been in the placings on 14 occasions.

Frenning drove a double at the meeting, also winning on the Ray Woods-prepared Arggghhh.

Marto does it again

He might be nine-year-old, but Shepparton-trained pacer Provocator has never raced better.

A son of Kenneth J — trained by Geoff Martin — Provocator made it four wins in his past five starts when he was driven to victory by David Moran last week at Shepparton.

And in winning he posted a PB 1:56.1 for the 1690 m trip in beating Most Delightful and the John Newberry-trained and driven Lombo Idle Belief.

Provocator is a veteran of 128 starts which have now produced 13 wins and 22 placings for stakemoney earnings of more than $73 000.

Fortnightly Sunday qualifying trials will be the only trials run by the club.

The decision has been made due to the manpower and expense needed to run trials.

There has also been dwindling trainers support in recent years.

There was a time in the club’s early history in the 1970s and 1980s when Kyabram staged bi-weekly trials on Sundays and Wednesdays.

The Wednesday trials were staged at 1 pm in the winter months and as evening trials in the Daylight Saving months. They were well supported with enough horses to often stage up to eight to 10 trials.

For the past 20 years the club reverted to weekly Sunday morning trials.

Wes’ grandfather, the late Bill Shellie, was the driving force behind the establishment of a new track and the development of a training centre at Kyabram in the late 1960s.

Brave to the end

Promising pacer Soshone Brave chalked up his fifth win when he beat the older pacers in a 56-61 race last week at Shepparton.

Reinswoman Kima Frenning utilised the well bred son of Bettors Delight’s barrier four to work to the front early and secure a pillar-topost triumph over the dogged Glenn Douglas-trained and driven Eastern Foxglove.

Shoshone Brave, bred and owned by Nathalia horseman Noel Tyndall, has had five wins and five top finishes from 11 starts for Shepparton trainer Isabel Walsh and looks a young pacer with a bright future.

The son of Four Starzzz Shark had not raced or trialled since January and was having only his ninth start.

In 2014 Shark Port won two of his first three starts — he finished second in the other start — as a twoyear-old.

But he was put in the spelling paddock after four starts as a twoyear-old after suffering a tendon tear in a Vicbred heat at Bendigo.

Then a ligament problem and breathing surgery followed that setback which further delayed his return to racing.

But Ward is hopeful all of Shark Port’s bad luck is now behind him and predicts if he stays sound he has the ability to win his share of races.

Shark Port is out of the Lotsa Clout (by Jennas Beach Boy) mare Kateleen Passport who won 10 of her 22 starts in Queensland.

Top trainer Andy Gath is not a regular at Shepparton meetings, but he produced a training double at the track last week.

Gath was successful with trotter Monaro Maro, an ex-Kiwi making his Australian debut, and also Cautivar in a 48-54 class pacers event.

Monaro Maro was a last start winner in New Zealand where he had won five of his 29 starts before joining the Gath stable.

He had a bit on his rivals at Shepparton, powering away to beat the runner-up, the Mark Leetrained and Stacey Towers-driven, Nica Madonon by more than 14 m, with the David Aiken-prepared and Kima Frenning driven Aimforthemoon filling the minor placing.

Cautivar was rewarded for three minor placings leading into the Shepparton assignment when he accounted for Neds Beach and the Craig Turnbull-trained Fletchas Roy.

Gath’s winners were driven by his wife, Kate.

Coming off a second at her previous start at Maryborough and a win at that track three starts earlier, Calaquendi responded to an aggressive drive from top reinsman Chris Alford who made a winning move to the front with a lap to go in the 1690 m event.

Now a seven-year-old mare Calaquendi has not been overraced and has had only 29 starts which have produced four wins and three placings.

District trainers got their share of the spoils at Echuca on Tuesday night.

The Ros Rolfe-trained and driven Franks Very Much made an impressive winning return to racing in a 2160 m 67-81 class race, coming from last to nab another Echucatrained runner — and the pacemaker — Dallas Nikolay.

A son of Grinfromeartoear, Franks Very Much, who was having his first run since February, chalked up his 11th win.

Despite winning three races on the trot before finishing ninth at her previous start she was a 16/1 chance.

The old warhorse Lights And Music again showed he can never be underestimated bringing up his 26th win with 63 placings from 239 starts which has boosted his stakemoney earnings to more than $156 000.

Shepparton trainer-drive Bec Bartley also savoured a win at the meeting, leading all-the-way with trotter Black Cat Claw, whose only other win was at Echuca.

The David Aiken-trained Raptors Flight is drawn to continue his unbeaten Australian record when he steps out in an 80-89 class race at Melton tomorrow night.

The son of Bettors Delight has strung together five wins from five starts since crossing the Tasman.

Raptors Flight has drawn barrier one over the 1720 m trip and looks set to make another bold for victory.

Aiken also has one of the key runners, Big Jack Hammer, contesting the Maoris Idol Free-For-All where he meets Tornado Valley, Sydney visitor Tough Monarch and the veteran marvel Kyvalley Blur over the short trip.