A big grin from ear to ear

Abbey Turnbull was full of smiles after race seven at Maryborough last week. And she had every reason. The 19-year-old had just driven Spunkyola to victory in a C1 Only class race to bring up her second win in the sulky. 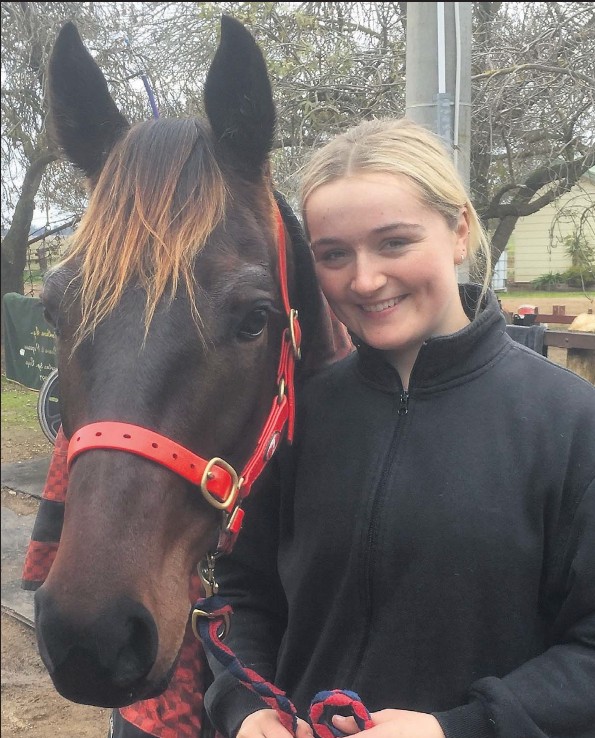 It was Turnbull’s sixth drive on the five-year-old Bettors Delight gelding since the pacer joined the Tatura stables of her trainer father Craig Turnbull.

In five of those starts Spunkyola had finished third on three occasions, so the win was overdue and well deserved.

Spunkyola had 80 starts for six wins prior to joining the Turnbull stable.

Abbey’s only other winning drive was on the Mark Pitt-trained Modern Lebron when he won at Shepparton in September.

Abbey has been driving for eight months and has chalked up about 50 drives in that time.

It’s been another big week for Nathan Jack.

The gun Shepparton horseman drove a double at Warragul last Sunday after winning at Maryborough the previous Thursday with My Secret Beach who made it two from two.

My Secret Beach, a three-year-old son of Somebeachsomewhere, made a big impression winning on debut on June 15 at Shepparton.

Despite a wide draw at his second start, My Secret Beach crossed his rivals comfortably when the arms folded back and led throughout to just hold out Impetuoso in a two-horse battle to the finishing line.

At Warragul, Jack won the Traralgon Cup with the pacer he now trains Dream To Share and on the Jayne Davies-trained trotter Redason.

Dream To Share has been racing in NSW for Bathurst-based trainer Amanda Turnbull and was having his first start for Jack.

A five-year-old son of Kenneth J he had won eight races and just on $70 000 from 39 starts prior to joining the Jack stable.

Jack had another big day at Maryborough on Monday.

He partnered the Anton Golinotrained Always Ready to victory in a two-year-old trotters heat of the Vicbred Super Series for colts and geldings and he also saluted on Roxy Maguire for the same trainer in a two-year-old pacers race.

Jack teamed up again with Golino to claim a three-year-old heat of the Vicbred Super Series for trotting fillies on Tuesday night at Bendigo with Majestic Player.

Then on Wednesday night he Knocked out a lot of early quaddie punters, partnering the Chris McPherson-trained two-year-old Rocky Creed, a 20/1 shot to victory at his second start.

Smart pacer Winkanditsover made a winning return to the racetrack for Shepparton trainer Steve Duffy last week at Echuca.

Stepping out for the first time since the Mildura Cup meeting in April and driven by Ryan Duffy, Winkanditsover worked to the front early and held off all challengers at the end of the 2160 m trip, covered in 1:59.7 mile rate time.

It was the Passmaster six-yearold’s fifth win this season with all these wins achieved since Duffy took over the training of the pacer.

Kyabram mates and footballing enthusiasts Peter Hall, Rob Whitford, Tony Hansen and John Lilford race Winkanitsover who has chalked up seven wins and 12 placings for more than $37 000 in prizemoney from 26 starts.

Turnbull succeeded in angling Rosas First into the one-one sit from her barrier three draw and made his winning move at the 600 m mark to establish a winning break.

Rosas First cruised home with more than 12 m clear of the runner-up Fowsands.

A six-year-old Ponder mare, Rosas First is enjoying virtually her first season of racing with four wins and four placings from 14 starts.

And Zozo Ma Gogo obviously likes the Frank Ryan Raceway as two of these wins have been achieved on the track.

The other win under trainer Jeff Gledhill’s guidance was at Albury.

Zozo Ma Gogo was at the nice odds of 10/1 in accounting for Sheezawingate by a neck with the David Aiken-trained and fastfinishing Heavenly Shades filling the minor placing in the 2160 m event for C1 Only class pacers.

Reinsman Ben Gledhill had Zozo Ma Gogo setting the pace from a good draw and she responded to some hard driving in the home straight to fend off all challengers.

Zozo Ma Gogo is well bred being by the now deceased super sire Rocknroll Hanover out of the Armbro Operative mare Cunning Kate, an eight times winner who has left three other winners.

The wait wasn’t so bad for Peter Lindberg last week at Echuca.

The Echuca-based Lindberg had Star Gazing engaged in the Niota Stud trot for T0 Only class trotters in a late race on a chilly night, but the antics of one of the runners, Betty Hall, delayed the start for quite some time.

Frustrating for those hardy souls at the meeting for race nine on the 10-race card, the Brian Gath-trained and driven Betty Hall refused to score up in two attempts and was a late withdrawal, but delaying the race for about 20 minutes.

But reinsman Chris Svanosio at least made the wait worth it for Star Gazing’s trainer by bringing the fouryear-old Conch Deville gelding with a well-timed run to beat the consistent Kevin Weidenbach-trained and driven Bridie OKane and the John Newberry-trained and driven All Hall.

Betty Hall was stood down by stewards from racing until the completion of one satisfactory trial in addition to being placed outside the draw.

Andyou will do nicely

After winning at Shepparton on June 10 and running second on the same track on June 15 when a good thing beaten, Andyou bounced back to claim her most significant win to date when she upstaged a strong field of rivals last week at Maryborough.

It was the four-year-old mare’s fifth win for the season and her eighth from 23 starts and has taken her prizemoney earnings to more than $47 000.

Avenel pacer Wrappers Delight followed up his gallant Shepparton second to claim a heat of the Vicbred Super Series for four-year-old entires and geldings at the Emma Stewart and Chris Alford-dominated Ballarat meeting last Friday night.

Driven by Kima Frenning for trainer David Aiken Wrappers Delight, the $2.30 favourite, led throughout in the 2200 m affair to hold off other top fancies Sirletic and Jilliby Chevy in a three-horse battle to the finishing line.

Wrappers Delight had run second on debut for Aiken on June 15 at Shepparton to the potential superstar Jilliby Kung Fu who had his colours lowered in the Ballarat heats of the Super Sires in which he finished fourth to the Stewart-trained Rocknroll Icon in track record time.

Wrappers Delight will contest a semi-final in the Vicbred series tonight at Melton where he has to overcome an extreme outside barrier draw as well as some smart rivals.

Plenty of local interest in the pacing Vicbred Super Series semi-finals in what should be a super night of racing at Melton tonight.

Northern Victorian trainers are well represented as they attempt to qualify pacers for the lucrative finals the following weekend.

In one of the two-year-old colts and geldings semi-finals, three locally-trained runners off the second row — Tidal Surge (David Aiken), Revolt (Isabel Walsh) and Young Rooster (Nathan Jack) — will clash.

There were some longshot winners on Wednesday night at Shepparton headed by the Ross McKellar-trained Cromwell Jake who saluted at tote odds of 40/1.

In what was a big night for Goulburn Valley trainers Donna Castles, Brian Bourke, Col Duncan, David Jack, Craig Turnbull and Glen Freeman all had winners at the meeting and more on those wins next week.